Home  >  News  > Geopolitics  >  Lessons from the Brussels Outrage: The Price of Appeasement

Lessons from the Brussels Outrage: The Price of Appeasement 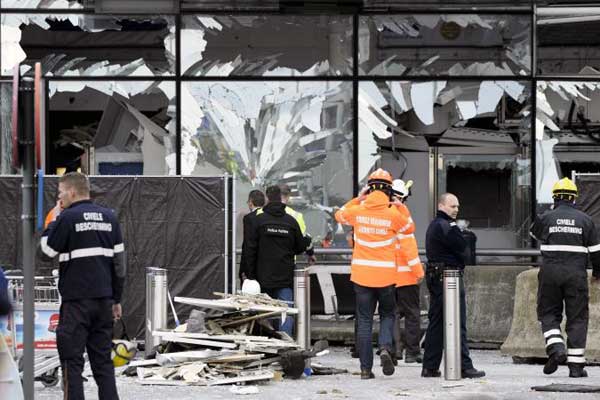 Finally, the attack on Brussels, and the earlier ones on Paris, has brought about a glimmer of realization among many Europeans that they are in the midst of a war, which while quite not like the last World War, is likely to be no less prolonged or horrific. It was certainly not the kind of war they envisaged, having earlier been conditioned to expect an assault by Soviet hordes, which they hoped to combat jointly with American help, and the threat of nuclear Armageddon. Fortunately for them, the world’s largest standing army remained standing quietly while the Soviet Union imploded around it.To their utter surprise the armies of the North Atlantic Treaty Organization (NATO) were without a job and had to look further afield from Afghanistan to Libya to keep them in business as usual.

…neither the armies of NATO nor the structures that unite Europe are organized to deal with this new existential threat. All of this comes at a particularly bad time as Europe finds itself at the brink of an economic catastrophe after years of recession.

Quite unsurprisingly, their subsequent interference abroad, along with follies from their imperialistic past have suddenly come home to haunt them. That initiative went completely awry and they now find themselves facing an implacable enemy from within, unwilling to give any quarter and wholly bent on the total destruction of life as they know it.

What is worse, comprehension has now dawned that neither the armies of NATO nor the structures that unite Europe are organized to deal with this new existential threat. All of this comes at a particularly bad time as Europe finds itself at the brink of an economic catastrophe after years of recession. It also faces challenges to its unity thanks to Great Britain seriously considering exiting the Union and because of   the strains put on its member states that are facing the brunt of the refugee crisis that has overwhelmed some governments. Matters are not going to be helped as Neo-Fascists start coming out of the woodwork, gaining respectability through votes.

Despite Europe, and especially in this case, Belgium, having been quick to hold outsiders responsible for their predicament, which they have little trouble in terming as terrorism. This may not be quite the case as some unconfirmed reports now suggest that Muslim youth in the West were encouraged to volunteer to fight against Assad in Syria as his removal was of paramount importance to the US and its allies. Blow back in this context is something we are all familiar with, having seen how militants nurtured by the State become uncontrollable after a time.

More importantly, Europe continues to be in denial over the condition of its minorities, especially their treatment at the hands of extreme right groups, which tend to have the tacit support of senior elements within their Security Forces. Counter radicalization is unlikely to make much headway until the underlying socio-economic and cultural problems are not ameliorated and fringe groups firmly reigned in. Yet, events in Belgium should give us reasons to ponder as we too find ourselves in a situation not too dissimilar to them.

…they have followed a policy of deliberate appeasement of all hardline fringe groups, regardless of ideology, in the fond hope that such inaction would ensure the home base was never targeted.

It is a country with a history of ethnic tension due to rivalries between the country’s French-speaking Walloons and Dutch-speaking Flemish. These rifts, where religious and ethno-linguistic roots take primacy over ability or efficiency, have adversely impacted state institutions leaving the country in a constant state of policy paralysis. It is probably the only western democracy that has not established a Counter Terrorism Coordination Center that could have ensured collation and analysis of inputs from diverse agencies and stake-holders, thereby reducing, if not neutralizing such threats.

Worst of all, they have followed a policy of deliberate appeasement of all hardline fringe groups, regardless of ideology, in the fond hope that such inaction would ensure the home base was never targeted. Wishful thinking that has now been tragically belied. In our case, government after government has consistently taken the easier way out and avoided taking hard decisions or putting in place a viable policy to either deal with radical elements within or with its causes.

The percentage of our population living below the poverty line varies depending on our own ideological biases, the Oxford University’s Multidimensional Poverty Index (2010), for example, suggests a staggering 55% lives below the poverty line of US$1.25 per day. Whatever be the figures, there can be no denying the fact that as the Socio-Economic and Caste Census (SECC) 2011, published in June 2015 put it, half the households in rural India are landless, dependent on casual manual labour, and live in deprivation. Add to this the absence of basic state infrastructure like access to drinking water, housing, sanitation, roads and medical facilities along with increasing inequalities between rural and urban areas, there is only one possible outcome that such resentment can lead to.

Can we continue to do so any longer and do we really believe that fault lines and fissures can be papered over with inane words and half-hearted action?

We thus have, as one report (Hearts and Mines: A District-Level Analysis of the Maoist Conflict in India by Prof Kristian Hoelscher, Prof Jason Miklian Peace and Prof Krishna Chaitanya Vadlamannati) suggests, that the Communist Party of India-Maoist (or Maoists) insurgency has taken the livesof 10,000 citizens and displaced another 150,000 as it has increased in scope and intensity since 2004 (MHA 2010). The MHA itself states on its website that between Jan 2010 and Dec 2015 a total of 8703 incidents have occurred resulting in the death of approximately 3000 citizens, including 597 Maoists and 812 policemen. To this, we need to add the grave problems and violence that confronts us in the North East and in Kashmir so that every citizen is fully informed of the grave threat that is eating away at our vitals.

Thus, while threats emanating from China and Pakistan, acting alone or in collusion occupy our consciousness, as they must, they do not form an existentialist threat, given our nuclear and conventional capabilities. Internal dissensions and the inability of the political class to tackle these in a just and empathetic manner pose a far graver threat. In this regard it isn’t only politicians but even administrators, Security Forces and even the thinking silent majority that prefers to live in denial. If that were not so we would certainly not be faced with a situation where millions of gallons of water are being used to maintain cricket pitches for a purely private enterprise, the Indian Premier League, while eleven states face unbelievably harsh drought which has led to mass-migration and farmer suicides.

That governments, both state and central, appear to have abrogated their responsibilities in this matter forcing our courts to step in once again is a telling snapshot of where we stand. Can we continue to do so any longer and do we really believe that fault lines and fissures can be papered over with inane words and half-hearted action? Like the Soviets in an earlier age, are we destined to follow in their footsteps and witness the third largest standing army in the world remain standing while the country collapses around its neck?

4 thoughts on “Lessons from the Brussels Outrage: The Price of Appeasement”