The first major challenge was to reorient the s/m design team from a conventional single hull design framework to a double hull nuclear powered s/m concept. Besides, having to put aside all the design normative and processes learnt at the Professor Gabler’s s/m Design Institute in Lubeck, it required a complete mindset change. Next, came the enormous challenge of innovating, the unique fuel package required for a compact s/m reactor. The Indian establishment had vast experience in developing the nuclear power programme under very stringent international technology denial regime. At that point of time, we also faced serious obstacles in obtaining enriched uranium, the universally accepted staple feed for the s/m reactors, in the quantum required to sustain a nuclear s/m flotilla.

In respect of nuclear propulsion, the Indian Navy (IN) followed the traditional evolutionary global path…

Due to severe constraints on the accessibility to authentic information, there are many misconceptions afloat on Advanced Technology Vessel (ATV), the Indian nuclear submarine (s/m) programme. Most defence analysts and writers have had to rely on interpolation/extrapolation of informal personal interviews of retired officials. Hopefully, with the commissioning of INS Arihant in March 2016, the cobweb will be removed.

Recent writings of Yogesh Yadav and Balaz Szalontoi have unearthed some authentic documents from Russian and Hungarian national archives which have provided fresh insight into the subject. After INS Arihant was launched and the reactor became critical – Dr Anil Anand also released some historical facts linked to the compact nuclear reactor project in which he had a lead role to play

An attempt is being made here to put together – as realistic a picture as possible and try to correct some of the misconceptions that have crept into the discourse due to secrecy. Some important milestones crossed in the process are also recalled briefly.

In respect of nuclear propulsion, the Indian Navy (IN) followed the traditional evolutionary global path. The prime responsibility of induction of marine engineering technology into the IN is that of the Directorate of Marine Engineering (DME) at NHQ. Commodore Tandon, the DME at that time, had in 1968, initiated a feasibility study project on marinised gas-turbine at the Gas Turbine Research Establishment (GTRE) in Bengaluru. This was before the acquisition of the Petya class of ships from USSR. Thereafter, most of the warships designed and built in India (including INS Vikrant under construction at Cochin Shipyard Ltd) and those acquired from Russia have gas turbines as their primary propulsion system. A similar exercise on nuclear propulsion was initiated around the same time.

The spadework for the induction of nuclear propulsion was commenced long before the date normally ascribed to it. Not sufficient credit is given to the foresight of the naval leadership. Since the early 1950s, design engineering was part of the advanced engineering courses undergone by selected engineer officers at Royal Naval Engineering College at Plymouth and Cranfield Institute of Technology in UK. Similarly, naval architects did their post graduation at Royal Naval College at Bath, Greenwich in UK and the Grechko Naval Academy at Leningrad in USSR. Ship, submarine and its associated machinery design formed part of their studies.

In 1968, after completing the nuclear technology course in BARC, Lt Gurmith Singh, (who continued with the ATV project till, his retirement from the Navy as Rear Admiral) was assigned the task of undertaking a joint feasibility study on nuclear propulsion. Thereafter, several project reports were rendered by the joint BARC-cum-Naval teams code named 932. The plethora of project report indicates the shaky ground on which we were operating at the time. The nuclear propulsion project took off in earnest in January 1976, after the approval of the Cabinet Committee for Political Affairs. Vice Admiral Tandon, the then Chief of Material, who along with the DME, was defending the case, had made it abundantly clear that at least a four-year lead time would need to be catered for – between the design/development of a nuclear plant and the s/m design.

Evidence now shows that even Prime Minister (PM) Nehru never locked the door on keeping the option open for India to weaponise the nuclear genii under national security compulsions. This policy was sustained by most of the PMs who followed. Dr Homi Bhabha, all along, had been advocating to PM Nehru that nuclear technology must be nurtured for such an eventuality. LK Jha and PN Haksar shared similar views.

The real impetus to the project came after the Soviet Navy demonstrated to PM Indira Gandhi, the capability of the nuclear s/m…

The real impetus to the project came after the Soviet Navy demonstrated to PM Indira Gandhi, the capability of the nuclear s/m, in deterring the attempts of the US Navy (USN) to intervene in the Bay of Bengal, during the 1971 War. In February 1972, Grechko, the Soviet Defence Minister, is reported to have brought to the notice of Ambassador D.P Dhar and General Manekshaw as to how a Soviet nuclear s/m stalked the USN’s nuclear powered carrier Enterprise in December 1971. Thereafter, Indira Gandhi gave unstinted support to the project. As a matter of fact, she became the driving force behind it. In this context, the suggestion that the Soviets offered us nuclear s/m assistance, even before the Indo-Soviet Strategic Partnership Agreement was signed and Germany conceded to signing NPT in 1970, is inconceivable.

The programme was, thereafter, initiated on three parallel tracks – the nuclear propulsion, the s/m as a weapons platform and the Submarine Launched Ballistic Missile (SLBM). At the stage of R&D for a nuclear propulsion package, no specific end use for the platform was formally identified. At the working level, it was understood that the ultimate goal would be nuclear deterrence or nuclear-powered ballistic missile submarines (SSBNs). Both the Union of Soviet Socialist Republics and the People’s Republic of China had adopted the evolutionary learning curve route – i.e. conventional attack s/m (SS) > Cruise missile armed conventional s/m (SSG) > nuclear s/m with cruise missile (SSGN) > nuclear attack s/m (SSN) and finally to ballistic missile armed nuclear s/m (SSBN). Formally, India by compulsion also had to follow a similar route, especially, to evade the strict technology denial regime and the linked sanctions that would have been invoked otherwise.

A great deal has been said about the former Chief of Naval Staff Admiral Pereira’s objections to acquiring nuclear s/m. In reality, his objections were not based on any pacifist considerations nor was it due to any lack of strategic vision. 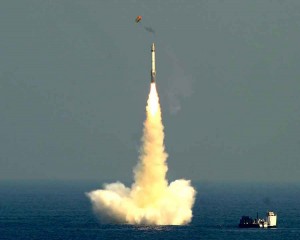 Under Water Launching of SLBM Sagarika

He was a seasoned sailor and a very well respected and pragmatic CNS who was concerned about:

In April 1981, during Chief of General Staff, the Marshal of the Soviet Union, Ogarkov’s visit to India – he formally enunciated the so called Ogarkov Principle, that laid down the parameters of the assistance feasible. Their insistence on compliance with the safeguard clause prior to any agreement on Transfer of Technology (ToT) for the reactors was not a surprise but was not acceptable to India. In July 1981, Dr Raja Ramanna’s delegation was taken to Murmansk and shown an SSGN.

After extensive negotiations, the Agreement, was concluded in April 1982 and can be broadly categorised under following heads. They conform to the Nuclear Proliferation Treaty (NPT) and Missile Technology Control Regime (MTCR). All subsequent Soviet/Russian cooperation on the nuclear s/m programme flows out of that umbrella Agreement. The issue of detail design assistance on the reactor was left to be considered separately. The ambiguity over nuclear s/m with cruise missiles SSGN vs SSBN was maintained. The likely fallout from the Agreement has also been listed for illustrative purposes:

i. SSGN operation and maintenance experience to the IN before induction of its own s/m.

ii. Physical access to the s/m and its reactor to the designers to familiarise them with the layout and space constraints.

i. To begin with, training of two sets of crew for operations and maintenance, inclusive of work up.

iii. Design and development assistance for the ATV programme: 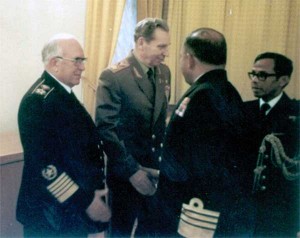 Following the umbrella Agreement – a professional soviet delegation led by Belausev, the Soviet Minister of Shipbuilding, came in December 1983, for extensive survey and assessment of shipbuilding and heavy industry capability in India. All the prospective Public and Private sector industries identified by India were considered.

The ATV programme was formally launched in April 1984. The Management structure replicated the Integrated Guided Missile Project. The Apex Board was chaired by the PM/RM and members consisted of SA to RM, CNS, Secretary DAE, Finance and DGATV with PDATV (Technical Coordination) as the Secretary. At the next level was the Programme Management Board – chaired by SA to RM.

The third level was the Technical Management Board chaired by the DGATV and attended by heads of all Work Centres. Finally, there was the Joint Indo-Soviet Working Group (JISWOG) – alternately chaired by DG ATV and the Soviet Deputy Minister of Ship Building, Rezinov. The work centres consisted of DMDE, PTC, SBC, MTC, Bharat Heavy Engineering Ltd, Larsen & Toubro Ltd. and Defence Research and Development Laboratory. By end 1980s, most of these institutions were sanctioned and running.