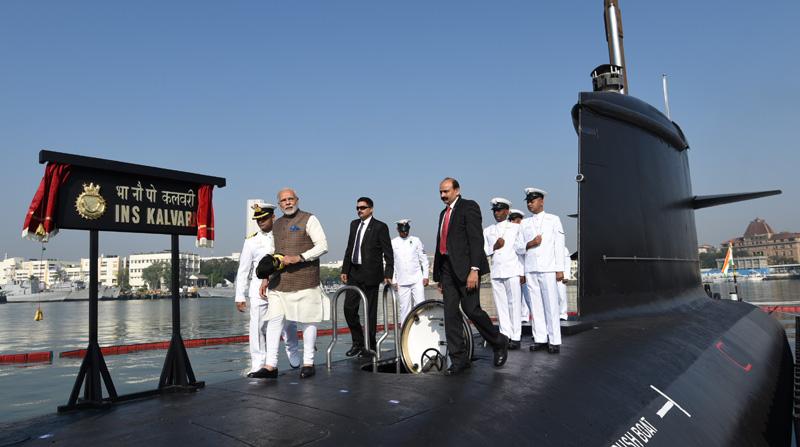 Prime Minister Narendra Modi at the commissioning ceremony of the Naval Submarine INS Kalvari into the Indian Navy, in Mumbai on December 14, 2017.

The country received the much awaited fill-up for its maritime arsenal with the induction of INS Kalvari. With dwindling submarine strength in numbers and their ending life cycle, India needed a boost to its underwater warfare capabilities. With five more silent killers on the anvil under Project 75, India has already floated an RFI for another 6 advanced attack submarines at an estimated cost of 8.3 billion USD, designated Project 75 (I).

The Navy’s long term induction plan that has envisaged indigenisation and make in India agenda is on the roll with the aim of acquiring about 28 submarines by 2030, to effectively monitor  the Indian ocean region of responsibility.

The INS Kalvari adds teeth to the Indian naval underwater weapons systems. It is armed with the proven fire-and-forget Exocet Anti-Ship Missile. The missile gives substantive time to the submarine in its underwater shoot & and scoot mode and is considered much more potent than a torpedo for anti-ship role.

The missile gained recognition in the Falkland war. It was instrumental in attacking HMS Sheffield, HMS Glamorgan and Atlantic Conveyer.

It showed its potency during Iran-Iraq war where it gained notoriety for the sinking of USS Stark. The speciality of the missile comes from its two stage navigation system. In its initial phase the missile relies on inertial navigation system. In its ingress towards the target it is in low altitude sea-skimming mode. It switches to active homing mode using radio altimeter merely 6 miles from the target thus giving the target seconds to react often rendering it ineffective for any countermeasures. Other than this the submarine is primed to carry 18 missiles or 30 mines on board with its six 533 millimetre torpedo tubes also capable of launching heavy torpedoes. It has an automatic weapons loading and control system. This is facilitated with the SUBTICS integrated combat management system. It embodies acoustic sensor suites, a weapons control module added to a command system for data processing.

This in turn is connected to a set of air surface detection sensors and connected to an integrated navigation system making it a state of the art automated and integrated underwater battle management system.

AIP or air independent propulsion forms the most important technological component sought by the all submarine deploying navies of the sea faring world including the Indian Navy. AIP enables the vessel to remain submerged for longer duration without the need to resurface frequently (once every 1 to 4days without the AIP). With AIP system the Kalvari class submarines are said to be capable of staying submerged for nearly two to three weeks.

Although the INS Kalvari may not host the operational French DCNS supplied Module d’Energie Sous-Marine Autonome- MESMA AIP system, its proceeding units are expected to have AIP at least in the last two of the six boats. This is to be followed by Indian DRDO built AIP in all of the six Project 75(I) boats. According to available open source reports the Indian Navy has shown ardent interest in installing the DRDO built phosphoric acid fuel cell (PAFC) AIP system that may be retrofitted during the first refit phase for the present batch of Project 75 Scorpene boats.

The DRDO NRML built PAFC (Borohydride Hydrolosis System) AIP is reportedly little lower in its efficiency compared to some of its competing systems, but its 45000 hours life cycle compared to the 5000 hours or less alternatives and its adaptability to by-pass stringent requirement for pure reactant makes it a preferred choice.  Complementing the afore-mentioned benefits this system does not require any extra /external carriage of Liquid oxygen (LOX) or hydrogen, a must for alternative systems. Lack of moving parts and the fact that it has no effluence of residual gases as by-product reduces the noise quotient substantially.

The inherent danger of storing large quantities of Hydrogen as the primary fuel element (as required by leading German AIP designs) is said to have been resolved by an enterprising solution by DRDO NRML India.  Hydrogen is produced online and in the quantity needed by using Borohydride Hydrolosis process.  For what it is worth India’s PAFC system is said to be a step ahead than China’s PLA Navy acquired Swedish built Stirling Cycle AIP system, due to LOX carriage requirements and gaseous effluence.

The Scorpene class submarines in its class are technologically a generation ahead of its rival submarines because of its use of high yield stress specific steel. This allows it to remain submerged much more than conventional steel hull. The high tensile steel reduces weight and its albacore bow shape reduces its detection signature, thus increasing its stealth mode.

Strategically the induction of the Kalvari class does more than merely adding of weapons systems. The estimated 30% indigenisation puts India on the path of the development curve of manufacturing sophisticated systems. India is already a member of the elite ‘Boomer’ (Nuclear Submarines) manufacturing club of nations. The manufacturing of the diesel boats would improve India’s technical prowess in manufacturing the silent killers.

India’s latent reaction to the leaked files of the designs of the Scorpene class submarines and its decision to continue on the project shows India’s maturity in design and development as it has the ability to change or alter specifications that may compromise the security of the ship. Also the fact that the leaked designs details were of a pre-contract time thus more or less out-dated in their details also rendered the ill intended act an exercise in futility.

India’s fleet construction plans of 48 vessels are in various phases of development showcases the country’s experience and capacity for large scale naval productions and development projects. More such development will be needed for India to become a major naval arms exporting house, it has made its modest beginnings by offering weapons platforms and ships to several countries. Even though exporting submarines is still a distance away, India is well on its way in becoming a regional maritime power to reckon with.

2 thoughts on “India’s New Silent Hunter Killers: On the Prowl”