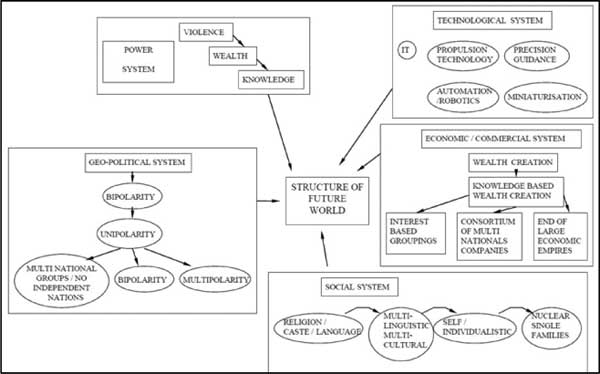 How to Evaluate National Security?

The Analytic Hierarchy Process (AHP) was developed by Thomas L. Saaty during the 70s in the US Arms Control and Disarmament Agency after getting repeatedly frustrated with a lack of simple and easy to use decision making methodology for complex decisions such as nuclear arms control in the context of superpower conflict during cold war.Since then AHP hasbeen well-established as a decision-making framework. In a near future, this kind of tool may become very useful. In our book, “Strategic Decision Making – Applying the Analytic Hierarchy Process” by N. Bhushan and K. Rai (Springer, 2004), we proposed and showed the use of AHP for evaluating various factors that impact national security in near term and long term. The methodology converts pairwise comparisons of various factors taken from multiple experts/stakeholders into quantitative ratings on a ratio scale. These ratings are combined to compute relative weights or importance of different factors in the views of the respondents/experts/stakeholders. 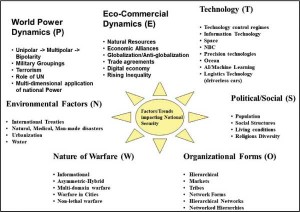 Centre for security studies, School of International Studies, Central University of Gujarat and Carnegie Endowment for International Peace, Washington D.C. conducted a unique workshop on Strategic Issues for Young Scholars at Gandhinagar, November 6-10, 2017. We used a quick survey instrument to poll the participants in the workshop – who were research scholars from various universities across India to find out their combined view on relative contribution of different dimensions on India’s National security through the year 2025. In the light of global structural changes since 1998 and 2004, we expanded and redesigned the factors affecting India’s national security as shown in the figure titled Factors Impacting National Security – 2017.

As one can observe key dimensions of the previous two versions are retained more or less with some variations on the constituent factors. However, we have two new dimensions called Nature of Warfare and Organizational forms to indicate two clearly discernible trends in the world in the last two decades or so. The warfare – in the traditional sense – has definitely expanded if not changed its very nature. The “informationalization” of warfare is clearly discernible. Further the Multi-domain nature of warfare is emerging as the classical instruments of warfare are either becoming too costly or ineffective for the powers who want to influence, nudge or force other actors to conformation, cooperation or collaboration. Second visible trend of hierarchical structures giving way to more and diverse network forms is shaping the world to a great extent into directions that are not easy to fathom with the lenses or tools that we have been using before.

Survey was conducted in the available free time in the workshop schedule. Also, the time available to explain the methodology was limited, despite these limitations and constraints, we had about 15 respondents to the survey instrument. It was a simple question that was framed as,

Question: (Pairwise Comparison) In your opinion, which one of the following factors will have more impact on National Security of India till year 2025? Put a tick mark in the relevant cell. 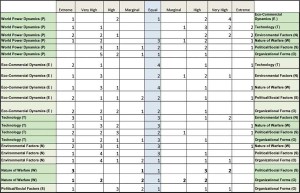 AHP combines the variations in perceptions of various stakeholders/experts into consensus ratings on a ratio scale and organizes the qualitative pairwise survey into what is called a reciprocal matrix as shown below.

One can observe each element below the diagonal of this matrix is just the reciprocal of the element correspondingly above the diagonal. The diagonal elements are always 1 indicating that compared to itself each factor is Equal.

Using the AHP methodology, the above reciprocal matrix is processed to compute relative rating of each factor. The sum of these ratings is always 1. The ratings computed indicate the relative importance of each factor as a combined consensus view of all the respondents. This gives us an overall combined view of all respondents together. Usually getting multiple experts to agree on anything is difficult. AHP simplifies that process. Also, it gives us a mechanism to reach consensus amongst varied opinions of multiple experts or stakeholders.

The ratings obtained from the above matrix are shown below.

It can be seen that the group of respondents perceive the greatest impact on national security of India through the year 2025 will be by Technology (T) which is 21.8%. Close on that dimension is Eco-Commercial Dynamics (E) which is 20%. However, there seems to be strong concern and impact due to Environmental factors (18.5%).

Technology driven eco-commercial development without destroying the environment should be the key strategic direction for responding to the potential threats to National Security.

India needs to be wary of the world Power dynamics (P) with an impact of 12.9%. The power dynamics will have an impact; however, the focus should be on technology driven eco-commercial development. Political/Social factors (S) will also have a 10% impact on India’s national security in next 8 years.

The changing Nature of warfare (W) with 9.2% and emergence of new Organizational Forms (O) such as different types of networks will impact India’s national security 7.6%.

Our aim in this study is to show the power of AHP to tackle complex problems such as National Security Evaluation to inform the decision makers for a National Security Policy and Strategy. Given the increasing complexity, increasing stakes and increasing position of India in world affairs, it is essential to not only involve all stakeholders but also to utilize scientific methods and techniques to create a robust national security assessment and evaluation framework. As we have shown methodologies and framework such as above can help.

Author wishes to acknowledge with gratitude Prof. Sanjay K. Jha and Dr. Arun Vishwanathan, for their invitation to speak at the recently concluded Workshop on Strategic Issues for Young Scholars at Central University Gujarat, Gandhinagar. I thank all respondents who contributed to my request to fill-up the survey instrument despite the hectic schedule of the workshop. Finally, I wish to thank the organizers for conducting such an interesting workshop.