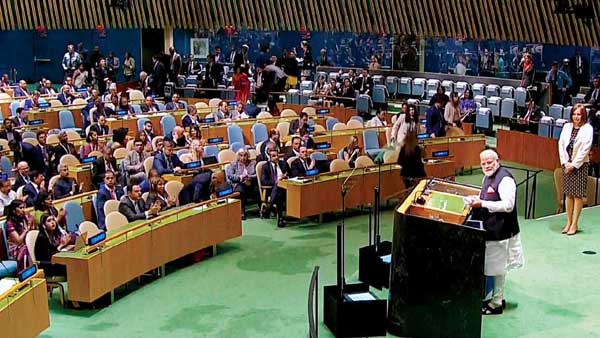 The United Nations General Assembly (UNGA) went off on expected lines on 27 September 2019. On the one hand the Prime Minister Narendra Modi made a speech that tick-boxed development, progress, world peace, annihilation of terrorism and protection of environment by all right thinking countries.

On the other hand Pakistan Prime Minister Imran Khan ranted, raved on Kashmir, with blood bath and nuclear war. The former was rather staid and kept to the UN format; Khan’s delivery has verged on the hysterical outbursts. He received applause from a large contingent of Pakistanis, while the Indians sat stone-faced and clearly furious on irresponsible and dismal statesmanship behaviour. Khan may find that the continuous nuclear threats may actually work to Islamabad’s disadvantage, as there is a growing unease about Pakistan’s nuclear capabilities.

On the back-foot economically, close to being blacklisted for terrorist financing, and beset by political opposition at home, the Pakistani establishment used the Kashmir issue with language aimed at different interest groups. The UNGA speech was first aimed at the Muslim diaspora in general, thus hoping to get expatriate populations to force an issue, and thereby getting disinterested governments to act. This succeeded marginally. Support from Turkey and Malaysia is almost traditional, and therefore their public backing doesn’t count much.

It’s his last target audience that is the most dangerous. References to Hitler, Nazism, and warning of another ‘appeasement’ would have most people in splits, except that the whole speech was aimed at inciting Muslims not only in Kashmir, but also in India to act violently against the government but failed.

Khan’s speech fell flat on the majority of countries. Shortly after the end of the session, Acting Assistant Secretary of State Alice Wells in her press interaction, opened with the meeting of the Quad — the grouping of India, Australia, the US and Japan. The strength of the India-US relationship was stressed, and the ‘historic’ Houston gathering referenced. Wells mentioned ‘mediation’, but went on to note that India had made it clear that it wanted no such effort, and that any future dialogue would hinge on Islamabad’s efforts in stopping terrorism, where she advised that a ‘lowering of rhetoric would be welcome’. Then, in a rather unusually acid remark, she noted, “I would like to see the same level of concern expressed also about Muslims who are being detained in Western China, literally in concentration-like conditions”.

That is a slap in the face of the Pakistan-China special relationship. With a tri-service exercise with the US coming up and a large trade deal in the offing, it is tempting to write off Khan’s expletives as so much hot air.

India exercised its right of reply to the statement made by Khan later and fielded its newest diplomat at its mission at the UN to fend off the allegations. “Every word spoken from the podium of this august Assembly, it is believed, carried the weight of history. Unfortunately, what we heard today from Prime Minister Imran Khan was a callous portrayal of the world in binary terms. Attempts to sharpen differences and stir up hatred, are simply put, ‘hate speech’,” First Secretary at India’s Permanent Mission to the UN Vidisha Maitra said.

She said rarely had the General Assembly witnessed such “misuse, rather abuse”, of an opportunity to reflect. “Words matter in diplomacy. Invocation of phrases such as ‘pogrom’, ‘bloodbath’, ‘racial superiority’, ‘pick up the gun’and ‘fight to the end’ reflect a medieval mindset and not a 21st century vision.

“Pogroms, Prime Minister Imran Khan, Niazi, are not a phenomenon of today’s vibrant democracies,” she said. “We would request you to refresh your rather sketchy understanding of history. Do not forget the gruesome genocide perpetrated by Pakistan against its own people in 1971 and the role played by Lt Gen AAK Niazi. A sordid fact that the Hon’ble PM of Bangladesh reminded this Assembly about earlier this afternoon.” Maitra said Khan’s “threat of unleashing nuclear devastation qualifies as brinksmanship, not statesmanship. Even coming from the leader of a country that has monopolised the entire value chain of the industry of terrorism, PM Khan’s justification of terrorism was brazen and incendiary,” she said.

“Citizens of India do not need anyone else to speak on their behalf, least of all those who have built an industry of terrorism from the ideology of hate.” She said Pakistan was a country that had shrunk the size of its minority community from 23 per cent in 1947 to 3 per cent today and subjected Christians, Sikhs, Ahmediyas, Hindus, Shias, Pashtuns, Sindhis and Balochis to draconian blasphemy laws, systemic persecution, blatant abuse and forced conversions. “Their newfound fascination for preaching human rights is akin to trophy-hunting of the endangered mountain goat, markhor,” she observed.

China a close ally of Pakistan referred Kashmir at UNGA. “The Kashmir issue, a dispute left from the past, should be peacefully and properly addressed in accordance with the UN Charter, Security Council resolutions and bilateral agreement,” State Councilor and Foreign Minister of China Wang Yi said in his address to the UN General Assembly on 27 September.

India on 28 September objected to China’s reference to the Kashmir issue, saying the region was an integral part of the country and all nations should respect its sovereignty and territorial integrity. “We expect that other countries will respect India’s sovereignty and territorial integrity, and desist from efforts to change the status quo through the illegal so-called China-Pakistan Economic Corridor in Pakistan-occupied Kashmir,” External Affairs Ministry Spokesperson Raveesh Kumar said.

China and a handful of other countries that support Pakistan should understand that the violation of human rights by China in Hong Kong and Tibet are much worse than anywhere in the world. Both China and Pakistan should be made to understand that India has the second largest population of Muslims in the world and all have equal rights being a secular country. Minorities are living peacefully and are enjoying equal benefits – ‘Sab ka Sath Sab ka Vikas and Sab ka Vishwas’.

China remains a one-party authoritarian state that systemically curbs fundamental rights. Since President Xi Jinping assumed power in 2013, the government has arbitrarily detained and prosecuted hundreds of activists and human rights lawyers and defenders. It has tightened control over nongovernmental organizations, activists, media, and the Internet through a slew of new laws that cast activism and peaceful criticism as state security threats. In 2016, the government abducted and forcibly disappeared several critics in Hong Kong and other countries. The government’s highly repressive rule in the ethnic minority regions of Xinjiang and Tibet persists. Despite legislation to protect against custodial torture, the practice remains widespread, including of Communist Party members accused of corruption.

Factually, India must bring out human rights violations in Hong Kong and Tibet by China at the international forums like UNGA till it desists from interfering with the internal affairs of India like Kashmir issue – those who live in the glass houses should not throw stones as the sharp shrapnel’s would hit them dangerously and mortally.