Home  >  News  > Homeland Security  >  In Search of a Trigger this Summer

In Search of a Trigger this Summer 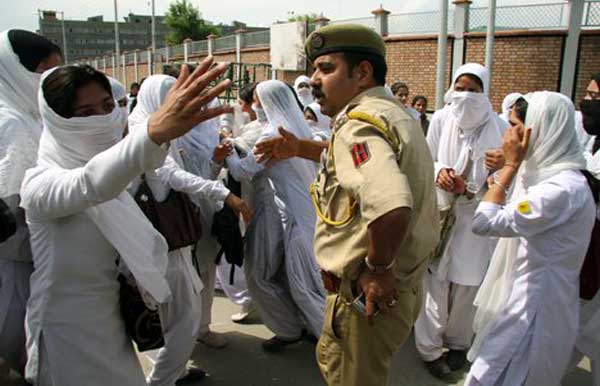 Come summer and coinciding with the “Durbar” move, it has almost become a routine that the Valley is set on fire by the elements inimical to the return of normalcy and peace in Kashmir. Continuation of Kashmir as a conflict zone with disturbed law and order situation suits many vested interests for whom continued militancy in the state has become a necessity so that they continue to enjoy power as well as financial benefits, status and perks emerging out of such a situation. Just one excuse is needed to unleash their agenda.

Excuse or “trigger” as referred in the parlance of security forces is what allows the vested interests to set the valley on turmoil and give green signal for commencement of ‘hartal and bandh’ (forcible closure) politics, ‘Intifada’ style agitation politics, anti-India sloganeering and separatist politics. The media gets attracted to it like a magnet and Kashmir hogs limelight and prime time in the media.

Not sensitive to the adverse effect such portrayal of Kashmir has on the livelihood of the common Kashmiri who waits the entire year for onset of summer so that he can earn his livelihood for the rest of the year due to a favourable tourist season, the media also willy-nilly contributes to the narrative of vested interests who want Kashmir to be seen as a conflict zone. The entire eco-system of Kashmir gets affected with a very few benefitting out of it while the vast majority continues to remain silent sufferers. Sometimes, the vested interests also provide the trigger.

Summer of 2019 is no different. Fortunately, the parliamentary elections were conducted peacefully except for the targeted killing of one senior political leader and sarpanch belonging to Bharatiya Janata Party, a couple of days before the polling for final phase of the Anantnag Parliamentary Constituency. The successful conduct of elections has rattled the inimical forces to such an extent that they were appearing disheartened and demoralised.

The relentless pressure put by the security forces, particularly post-Pulwama, has broken the back bone of Pak sponsored proxy war with top leadership and foreign cadre of both Jaish-e-Mohammad (JeM) and Lakshar-e-Toiba (LET) virtually made extinct. More than 50 terrorists have been killed since February this year. Hizbul Mujahideen (HM) though having the largest cadre suffers from lack of leadership, arms and ammunition supply, training and motivation.

The strict action taken by the government against terror funding has shut the tap of free flow of foreign funds leading to cash crunch. Hence, the outfit has been on the back foot since long and mainly involved in providing logistics and local knowledge support to the foreign or foreign-affiliated groups.

Under such circumstances the story of horrific rape of a three year old girl in Bandipora area spread like a viral and proved a boon for the anti-national forces active in Kashmir. While everybody condemned the heinous act, wanted justice to be delivered and the police acted promptly by arresting the culprit, the inimical elements saw in it a ray of hope for the trigger they were looking this summer.

Initially, the Principal of the school where the culprit studies gave him an age certificate declaring him a juvenile, for the reasons best known to him. A medical exam by the police proved that he was an adult. Then the entire episode was given a sectarian touch by leaking out the information that the victim child was a Shia. Protest marches were taken out and raised tempers brought the Valley on edge of sectarian clashes. Surprisingly, the attitude of the leaders of Kashmir based mainstream political parties and the certain segments of civil society remained ambivalent.

There were no visits to the place of the victim or the candle marches as were witnessed during the infamous Rasana case of January 2018 which was used by the same elements to defame the Dogras of Jammu, create a communal rift between the local Dogras and Gujjars who enjoyed centuries of bonhomie and co-existence and launch anti-India protests in the Valley.

As all this was happening another rape case was reported in the Valley. It happened on Sunday (12 May) evening in Ganderbal. It triggered further rage. A something familiar happened then. It wore resemblance to the spontaneous violence that erupted after the killing of Burhan Wani, though not to that extent or scale but the modus operandi appeared familiar.

The students assumed control of the protests and they appeared in large number on the streets pelting stones targeting security forces and local police. Interestingly, neither the security personnel nor the policemen were in any way involved in the horrendous crimes. Such organised stone pelting had diminished to quite an extent after imposition of governor rule in the state. The following Monday and Tuesday saw violent clashes. Over 50 people including 47 security personnel were injured in the clashes that broke out on Srinagar-Baramulla highway on Monday.

A large number of vehicles were also damaged and the highway was kept blocked for hours together. Every effort was made by the protestors to provoke the security forces to retaliate with force. Some hidden hand was guiding them to do that.

Having, failed in their design to achieve the desired result, the protesters shifted their focus to the capital town of Srinagar, the seat of power, in the hope that security forces will brook no non-sense here. Protesters clashed with the security forces outside all major schools and colleges including the University of Kashmir. The focus was lost from the justice to rape victim to somehow provoke the security forces to open fire in retaliation leading to causalities.

The security forces so far have not obliged them. The attempt of the inimical forces to turn the table by using the rape cases as excuse to create a trigger seems to be failing this time but the security forces have to remain alive to the design of these inimical forces. A lot of credit also goes to the local police that successfully apprehended both the culprits without losing much time and forming Special Investigation Teams to enquire into the episodes.

The former CM Mehbooba Mufti tried to add fuel to the fire by suggesting that the accused should be tried under the Sharia Law and the accused stoned to death. Known for her pro-separatist and pro-terror attitude, she wanted to create a controversy that accidentally may provide the trigger to set the Valley on fire this summer. But fortunately for Kashmir  she has lost her credibility with the local youth to such an extent thatno body took her seriously and treated her tweet as yet another desperate attempt to remain politically relevant in the vast canvas of Kashmiri politics.

The attempt of the inimical forces may have ebbed down temporarily but they will not give up so easily. Pakistan will try all the tricks in its bag to ensure that not only Kashmir remains on the boil but the arc of insurgency spreads south of PirPanjal.

Some of the events of the recent past do not augur well for the emerging security scenario in Kashmir. Pakistan has succeeded in getting loan from International Monetary Fund (IMF) that will help it to bolster its failing economy. But, the strict conditions imposed by IMF and FATF (Financial Action Task Force) will force Pakistan to not to be seen as an executor of cross-border terrorism. Nevertheless, it will also not let the investments made by it to keep Kashmir as a dispute with India go waste so easily. Pakistan will try to keep the militancy alive in Kashmir to project it as a home-grown resistance movement.

The recent meeting organised by the ISI between the IS (Islamic State-earlier ISIS) with HM indicates the change in the modus operandi of ISI. IS supremo Al-Baghdadi has also shown renewed interest in India and Ghajwa-i-Hind. IS has also claimed that it has set up new branch “Wilayah of Hind” (India Province) after the conduct of successful multiple attacks in Sri Lanka with the help of a local affiliate. The presence of ISJK in Kashmir, which police claims to have totally wiped out, is a worrying development and will have to be carefully monitored.

Thus, the search for trigger by anti-national elements will continue. It remains to be seen when and who provides the trigger. The security forces cannot afford to lower the guard. As a votary of peace and the one who wants Kashmir to return to its pristine glory, like millions of Kashmiris I also pray for a peaceful summer of 2019, which may prove to be a watershed year as far as J&K is concerned.