In Search of a Rifle: Ministry of Defence goes Globetrolling

The Indian army realised the inadequacies of the existing 5.56 mm, INSAS rifle way back in 1999. Soon after the Kargil war, the Army’s quest to find a replacement for its standard issue INSAS, began. Large number of infantry soldiers had reported frequent stoppages, cracked plastic magazines alongside other mechanical and structural failures in their weapons. The story is same with those fighting the insurgency in the North and in the East. Today, infantrymen could be seen marching with INSAS rifle on the Rajpath, but you would spot none with this weapon in the Kashmir valley. AK 47 by far remains the most trusted and favorite buddy in combat of a rifleman.

Infantry engages the enemy on foot and can literally determine a nation’s future. In their final two hundred meters dash it is just, do or die. For this simple reason these foot soldiers proudly claim, “That the victory is always measured on foot”. But will that dash end up in a victory? A lot would depend upon the weapon held by this infantryman.

Infantry not only moves on foot on the battle field, but may also use mounts, military vehicles, or helicopters and aircrafts for transport. No matter what the case may be, but at the end of it, they are the boots and the rifles.

…the plan to buy new small arms weapons from overseas, has been held back due to delays by the ubiquitous red tape.

Infantry make up a large portion of all armed forces in most nations, and typically bear the largest brunt in warfare, as measured by casualties, deprivation, or physical and psychological stress.

In the contemporary tactical battle areas, high maneuver armoured warfare, armoured fighting vehicles, long range artillery and the airpower has added a totally new dimension to ground combat, but infantry remains pivotal to all modern combined arms operations. In the mountains the Infantryman is on his own.

The Indian army realised the inadequacies of the existing 5.56 mm, INSAS rifle way back in 1999. Soon after the Kargil war, the Army’s quest to find a replacement for its standard issue INSAS, began. Large number of infantry soldiers had reported frequent stoppages, cracked plastic magazines alongside other mechanical and structural failures in their weapons.

The story is same with those fighting the insurgency in the North and in the East. Today, infantrymen could be seen marching with INSAS rifle on the Rajpath, but you would spot none with this weapon in the Kashmir valley. AK 47 by far remains the most trusted and favorite buddy in combat of a rifleman. This has not only resulted in huge logistical challenge and a drain on the exchequer. But this has also resulted in a trust deficit when it comes to, Made in Ordnance Factory products.

The army now plans to import 72,000 assault rifles and 94,000 carbines on a fast track basis for over `3,500 crore. It had issued Request for Proposals (RFPs) in February this year citing urgent operational requirements for its troops. These small arms are meant to replace the INSAS rifles and vintage Sterling 9 mm carbines. A fast track procedure bypasses the lengthy trial process associated with regular purchases. The army hopes to complete the acquisition of all the weapons in 12 months, a time frame stipulated by the Defence Procurement Procedure (DPP) 2016.

However the plan to buy new small arms weapons from overseas, has been held back due to delays by the ubiquitous red tape. Also, the military’s desire to balance the needs of its troops, against the efforts to build one domestically under Prime Minister Modi’s ‘Make in India’ programme, has further added to this delay.

Going purely by the faith and confidence the Indian troops have in AK 47, it would be practical to go ahead for AK 15 assault rifle.

A scouting team is globetrotting and meeting with foreign rifle-makers in search of a suitable infantry weapon system. Interestingly this team would also interact with Colt’s Manufacturing Company LLC and Italy’s Fabbrica d’Armi Pietro Beretta apart from, Swiss Sig Sauer Inc, the Czech Republic’s Ceska Zbrojovka and Israel Weapons Industry Ltd. These companies were had also brought their products for the earlier request for ‘multi-caliber assault rifles’ which was shelved after nearly four years of weapon trials.

US gun maker Colt and Italy’s Beretta had recently pulled out of this contest. Both Colt and Beretta were offering weapons for the 7.62×51 mm battle rifle and the 5.56×45 mm carbine requirements. The two companies were not among the dozen-odd firms which had responded to the Indian army’s RFPby May 7. The reason for this pull out is cited to be the unrealistic timeframes and stiff financial clauses.

In addition to this there are plans to manufacture 400,000 AK 15 Kalashnikov rifles to meet the requirement of the rest of the force. These would be manufactured at the Indian Ordnance Factories.

The prospective candidates aren’t too many but what they have to offer–weapons suited for the 7.62x51mm round–should meet India’s standards. The characteristics of these weapons on offer have been discussed below for a quick paper evaluation of each system. 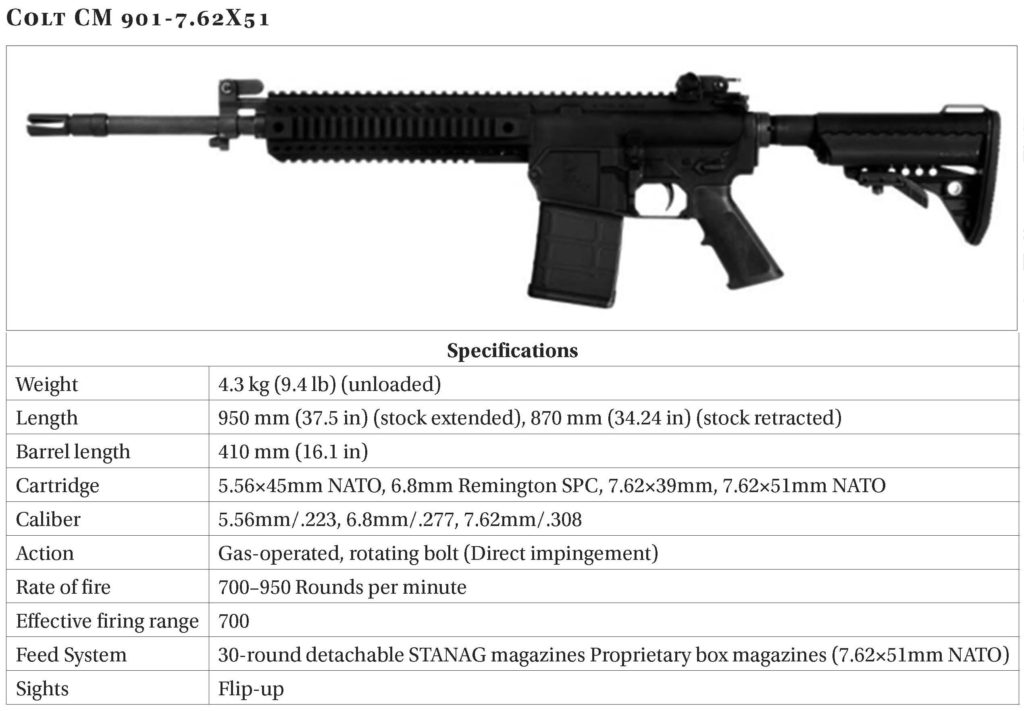 The CM901 weapons system is based on Colt’s existing M16/M4 military designs. It shares the direct gas impingement operation, as well as much of the action, controls, and basic aesthetics with previous Colt rifle designs.

The system has ambidextrous controls for the bolt release mechanism, magazine release, and fire selector/safety lever, trigger group, pistol grip, telescopic stock, and buffer tube. The system is having a monolithic design with a full-length top rail, and three auxiliary rails for mounting accessories, free-floating barrels, and front and rear flip-up sights standard, when not using upgraded optics.

The ARX-200 is a further improvement on the ARX platform that’s proven itself among customers worldwide. The advantage of Beretta are its ergonomics–the rifle is ambidextrous and the space between the magazine well and the housing for the vented barrel assembly features a subtle foregrip for the shooter’s hand. These features, along with many other details, makes it an appealing choice for long-term standardization.

The rifle’s stock in particular is remarkable. It’s easy on the shoulder and both retractable and collapsible. The armies of Italy and Argentina have embraced the ARX as their standard rifle. The ARX has found a niche in many countries where the armed forces prefer Soviet-era weapons, i.e. Albania, Egypt, Kazakhstan, Turkmenistan, which is a plus for the Indian market. The ARX’s popularity extends to various law enforcement agencies.

The FN SCAR family has the distinct advantage of being the most recognizable among today’s assault rifles. Always copied yet never eclipsed by its peers, it enjoys the patronage of American and European Special Forces and is coveted by gun collectors all over the world.

The FN SCAR-H in particular has more than a decade of asymmetrical wars behind it and is available either as a rifle, a carbine, or a marksman’s weapon.

Already used in at least 24 different countries, the FN SCAR-H hasn’t been standardized by a whole army yet but various elite units have found the rifle to their liking. The OFB’s past experience with the original FAL or Self Loading Rifle should make the FN SCAR-H a convenient choice for their production line.

As for the Indian army, this could well be the successor to the famous 7.62 SLR.

Galil ACE a heavy barrel makes it ideal for all terrain and climate that the Indian Army fights in. So many parts of the rifle, from its front grip to its lower receiver, will be quiet similar to the present INSAS rifle.

A length of Picatinny rails between its back and front sights allows various options in optics. The rifle’s stock is a marvel. It’s retractable like the AR-15’s but folds sideways too.

Small arms made by Israel Weapons Industries are sold throughout the world and it has shared its manufacturing know-how with Colombia, Myanmar, South Africa, and Vietnam.

Indian special forces are familiar with the excellent Tavor bull pup and Negev light machine gun. It doesn’t hurt how Delhi and Tel Aviv have transacted billions in arms deals for the past 20 years.

The Heckler & Koch 417 A2 draws heavily on AR 15 and it is a strong contender for the Indian Army’s next battle rifle. It is in use by elite units and commandos across 20 countries. Its track record in active operations makes it a preferred choice.

The SSX that was first unveiled at a Jakarta in 2014. This rifle with Picatinny rails and ergonomic handling is based on a proven design PT Pindad has manufactured for many, many years.

Being a European small arm its design is convertible to different variants for commandos, snipers, the rear echelon, and special police units. The SG 751 comes with a side folding polymer skeleton stock, a modest length of Picatinny rail.

Sig Sauer rifles have been sold to almost 20 countries and the Swiss even transferred its production abroad.

The AK-15 is a new Russian assault rifle. It was developed under the Ratnik future infantrymen programme. This weapon was first publicly revealed in 2016. The AK-15 is mainly aimed at elite units of the Russian military and law enforcement forces, as well as possible export customers. It is planned that the AK-15 will replace in production an AK-103 assault rifle.

Though there exists a stiff competition amongst the technologies at display having little variation. However the Indian Army will have to balance between the ease of handling, minimum logistics, ease of domestic manufacture and above all the soldier’s choice.

Going purely by the faith and confidence the Indian troops have in AK 47, it would be practical to go ahead for AK 15 assault rifle. Going in for government to government contract with the Russians and moving ahead under the provisions of article 71-72 of DPP 2016 could well mean the quickest way in addressing the infantry Man’s woes.

However this rifle from the family of FN FAL, the latest FN SCAR, is a direct descendant of our lethal 7.62 mm SLR. It could also prove to be a popular choice when it comes to training, ease of handling, manufacture, operational effectiveness and above all the FAITH.

2 thoughts on “In Search of a Rifle: Ministry of Defence goes Globetrolling”