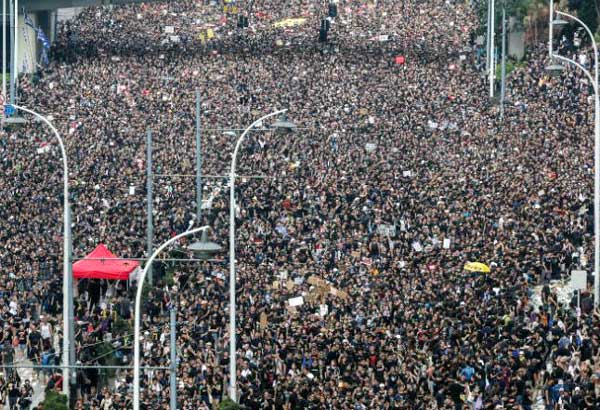 Hong Kong citizens were quite agitated that mainland China ( PRC ) was in the process of bringing out the National Security Act, which was meant as an enablement legislation to frame charges and arrest, or, even arrest for life, citizens on charges of treason, sedition, secession, or subversion.  This protest was a political climb-down for PRC –leading to the resignation of Hong Kong’s pro-Beijing Chief Executive Tung-Chee hua.

Protesters numbering some 400,000 stormed the main streets of Hong Kong  on July 1, 2012. This massive anti-Beijing show of strength was purposely done to synchronize with the 15th anniversary of the handover of Hong Kong to China. A hardcore Beijing loyalist C.Y.Leung was appointed the Chief-Executive of Hong Kong bringing in enormous despondency among pro-democracy activists.

The September 2014 protests-popularly referred to as “Occupy Central” or, “Umbrella Movement” in Hong Kong began after  the National People’s Congress Standing Committee ( NPCSC ) of People’s Republic of China ( PRC ) proposed reforms to Hong Kong’s electoral system, which would have been restrictive since it would have authorized the Communist Party of PRC to pre-screen the candidates for the leadership of Hong Kong.

The recent street protests by an estimated two million in Hong Kong-which witnessed the island’s worst outrage in years against a yet to be legislated extradition bill, which was aborted midway- before it could be deliberated through the seventy member unicameral assembly- should be seen not only as a legacy of history, but in a wider context of the irritants and challenges for Beijing in the Taiwan straits and South China Sea. Of course, the US-China trade dispute, to the extent it has subdued Beijing’s wiggle room for “ neighbourhood intimidation”- has also played a part, alongside mainland China’s internal challenges. As per the latest reports Hong Kong’s Chief Executive Ms. Carrie Lam has had to relent and decided to suspend legislating the extradition bill. She has also tendered an apology for initiating this measure, but she has not yet met the demands of the protestors, a)  that she should resign forthwith and b)  those involved in the protest  should not treated as rioters and subjected to any criminal charges, or, that initiating the above bill may be permanently dropped.

She has however, as expected refused to concede to demands calling for her resignation, or conveying her decision to drop the proposal as regards the extradition bill.

The passage of the extradition bill, would have led to a situation where  a “criminal” instead of being subjected to legal scrutiny, or, trial within Hong Kong itself, as is the case at present, would have to be sent to mainland China, where summary judgments are given in contravention of all canons of civilized behaviour, or without providing enough rights of proper legal defence to the “ accused “ Also, such a situation lends itself to the possibility that the PRC may make extradition a means for falsely implicating and harassing its political opponents ( there is a massive pro-democracy sentiment in Hong Kong with tens and thousands of anti-Beijing activists. Some among them also took part in the Tiananmen Square protests of 1989. ) It should be mentioned that many pro-democracy activists have been abducted by Beijing and have never been seen since.

The subjugation of Hong Kong by Great Britain (GB ) came about as a result of trade relations between GB and Qing imperial China ( QIC ) which began in the 17th and 18th centuries. Imports by  GB  primarily consisted of silk, porcelain and tea and Qing imperial China’s main import was silver through the port of Canton ( this port facilitated the two way trade )

There was a trade imbalance  in favour of  QIC –in order to set this imbalance right GB starting cultivating opium in British-India for exports to QIC.  This led to adverse consequences marked by the two opium wars. The health hazards of a narcotic such as opium on the local population were extremely damaging. Eventually, the trade imbalance and also the helpless situation in which QIC was placed , led to QIC granting concessions to GB, which had its fallout in the surrender of Hong Kong and few other territories to GB for 99 years.

The underlying postulate which determines Hong Kong’s political status  is fundamentally  drawn from China’s “ one nation two systems “ policy and its corollary Hong Kong’s Basic Law. The Basic Law i.e. Hong Kong’s  Constitutional document was approved in March 1990 by the National People’s Congress of China and the provisions of this Law took effect from  July 1, 1997, the date when Great Britain ceded Hong Kong’s sovereignty  to China after the 99 years –as agreed upon between the UK and the then ruling imperial China.

Basic Law: (BL) is a quasi-Constitutional document, it facilitates Hong Kong to have its own legislature and a Chief-Executive as the head of the government. By this Law Hong Kong functions as a Special Administrative Region ( SAR ) of the People’s Republic Of China, with a high degree of autonomy in all matters except foreign affairs and defence- in conformity with the Sino-British Joint Declaration of 1984 and the Basic Law.

Hong Kong will continue to retain its political, economic and judicial systems and its unique way of life for at least 50 years after retrocession in 1997.

Nations peripheral to PRC are highly suspicious of its nefarious designs. and many among them have been forthright in condemning Beijing from time to time. However, Beijing’s immense influence in the region and its financial and military might have been a stumbling block for them to refrain from the discontinuance of nominal diplomatic superficialities, or even severance of ties.

As for Beijing Hong Kong is an international financial centre. Its financial clout and world stature are a feather in Beijing’s cap and its cash register- and PRC is not oblivious of the above fact. Otherwise, Hong Kong’s pro-democracy protesters can be crushed by China in minutes.

Will PRC ever dare to crush the pro-democracy movement in Hong Kong, not unless it is willing to face international humiliation.