Has India lost the proxy war? 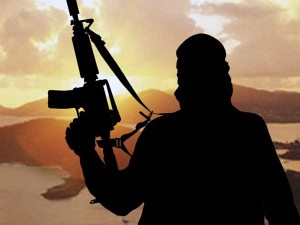 India has habitually been ignoring existential threats from China and its proxy Pakistan, steeped in the Nehruvian tradition of burying its head in the sand, ostrich like, at the first sign of danger. It has subverted the will of political class to stand up for national interests. The act of rewarding Pakistan with a bilateral foreign ministers’ meeting soon after its BAT team slit a BSF trooper’s throat, and then backing out when local jihadis in Kashmir gunned down three more policemen after dragging them out of their houses , is entirely in keeping with this policy of passivity and cowardice.

Does Imran Khan, as Pakistan’s ‘puppet’ prime minister, have any business calling India arrogant or petty while reacting to the cancellation of the proposed meeting in New York?  Especially when the Jihadi-ISI combine he nominally heads, continues to commit acts of mayhem on the soil of India, even after his ascension as the chief executive.  Why does a rough hewn Khan, with none too enviable reputation or credentials himself, but talks of peace with a forked tongue,  overlook the genocide his army committed on the East Pakistanis in 1971, shaming itself universally or its atrocities on Balochis?

But even more contemptible is the response from a country of India’s size and stature. Badly bruised and beaten, it retreats behind a wall of silence, meekly acquiescing in its defeat on the battleground.  The determination to inflict severe punishment on the perpetrators is conspicuous by its absence, as any self-respecting country, exercising its sovereignty, would have done. What kinds of compulsion prevent an aspiring superpower from imposing costs on the perpetrators in its own backyard is beyond fathoming, except for a few instances of passive retaliatory fire.

The foreign minister’s dramatic denouncement of Islamabad at the UN, or its castigation by a junior diplomat from the same forum, regarding an allegation about bombing school children and lastly, the prime minister’s dire warning to Islamabad to desist from terror acts, on the second anniversary of the surgical strike, sound like an articulation of helpless rage. The rhetoric cannot mask the government’s grave failure to act decisively when Pakistan commits thousands of ceasefire violations and other provocations with impunity.

Even then India meekly swallows its pride and agrees to negotiate with Pakistan on humiliating terms, at the insistence of duplicitous Americans, after every act of depredation, to help confer legitimacy on the Terror Capital. It is a recurring theme of betrayal and a replay of PM Vajpayee’s invite to Pervez Musharraf, post Kargil, even after the dictator had stabbed the country in the back. Contrast this with President Dilma Rousseff’s forthright stand, who promptly called off her US visit, after Wikileaks exposed the National Security Agency’s snooping on Brazil and India, in 2013.

Rousseff snubbed President Obama and refused to compromise with Brazilian pride and honour, unmindful of America’s super power status, unlike India which acts as if the violation of its sovereignty were of no consequence. China and Turkey too prefer to carry on trade with Iran, despite US sanctions, knowing very well that there is a point beyond which Washington cannot enforce its writ. But India caves in at the slightest signs of trouble, resorting to diplomatese to save face.

The shock value of the one-off surgical strike two years ago has worn off, with a defiant ISI-jihadi network erecting still more launch pads along the LoC, including the one in Lipa Valley, pulverized by the Army Special Forces in the daring raid then. The cold blooded killings of Lt Ummer Fayaz and rifleman Aurangzeb, beginning with the mutilation of Capt Saurabh Kalia and his men on the eve of Kargil and decapitation of others later, followed by the recent execution of three policemen, coincides with an deliberate escalation of the proxy war, with hundreds of jihadis waiting to cross into India from 27 terror launch pads.

The irony is not lost when security men, allowed to proceed on leave without side-arms, are left to die unprotected in extremely hazardous zones. Just as UP Police personnel, provided with 9 mm pistols, hold the power of life and death over innocent citizens. Consequently, a trigger happy constable guns down an unarmed Apple executive in a peaceful Lucknow zone and justifies his criminal act on spurious grounds, just like any other terrorist. In both instances the message is loud and clear. The state has abdicated its obligation to protect innocents from the whims of killer cops and jihadi psychopaths.

If the western neighbour raises the nuclear bogey every so often, then the responsibility must squarely rest on the shoulders of Prime Minister Morarji Desai, whose imperious directive to cease all covert activity on Pakistan’s soil materialized at the most inopportune moment! It derailed a sensitive operation midway to raze the super secret lab developing the nuclear device, if reports surfacing recently are to be believed. There could not have been a more fitting burial to Islamabad’s dreams of glory. Later Indira Gandhi, the so called iron lady, compounded the catastrophic folly by not permitting Israel to bomb Pakistan’s nuclear facility, from a base in northern India.  She also blithely returned the 93,000 PoWs in exchange for empty assurances.

Paradoxically, when the Army needs strengthening, Major Gen Kandhuri is unceremoniously removed from the chairmanship of the Defence Standing Committee, for pointing out a few home truths, about how the Army is facing a crippling dearth of modern weapons. Why even some of the lowly constables guarding IPS officers have been spotted in state capitals, flaunting state of the art Heckler & Koch MP5 submachine guns, a weapon not issued to the Army!  Ultimately, the military has to bear the consequences of political pusillanimity, acts of omission and commission and brazen appeasement of vote banks.

The equally nefarious role of the print and electronic media in the reverse glorification of the jihadis’ predatory tactics ensures a steady stream of publicity for their cause and invests them with a halo of invincibility. These psychopaths go about their business of maiming and killing locals and policemen, openly contemptuous of a bumbling government. Rough and ready justice is what they fear and deserve, which must be summarily doled out to them. It will send an unmistakable message down the line that such dastardly deeds will only invite harsher punitive costs. But who is listening?

However, the entry of a motley group of leftists, Lutyens media, lawyers, human rights activists, religious platforms, NGOs and ‘secular’ politicians into the scenario, has imparted an even more sinister dimension to the game. This rag tag army wages a guerrilla style campaign against the democratic set-up, insulated from the dangers of being snuffed out with a stray bullet, unlike its counterparts in the Red Corridor. These sophisticated foot soldiers employ the tools of defamation, slander and half truths to a devastating effect, debilitating the state’s resolve to fight the hydra headed terror apparatus and facilitating the designs of the Jihadi-ISI clique.

Some of the Janus faced Bollywood celebrities co-opted by the sinister cabal, too, owe their vast riches to the fans in India. Yet they never balk from seizing every opportunity to paint it as an oppressor, slander the Army, launch verbal blitzkrieg over alleged acts of intolerance and human rights violations, etc. Significantly, they did not protest the desecration of the Martyrs Memorial in Mumbai or the mutilation of soldiers.  But when one of their very own, a doubly traumatized woman makes her harassment public, supported with ample footage of acts of vandalism against her family members aired by a news channel, then the entire tribe relapses into a paralytic silence or rises in defence of the abusive perpetrator.

The shrill actresses’ brigade, which is otherwise very aggressive in defending the tukde-tukde gang, stone-pelters and forcible inter-religious marriages, becomes strangely muted when twittering support for the victim. They will pledge undying support to women’s empowerment and their right to dignity, more as an exercise in public relations rather than any genuine commitment. But back down from naming and shaming the wrong doer, for all their sham righteousness.  What can one say about Bollywood that bent over backwards pledging unconditional support to Indira Gandhi, when she imposed the Emergency and arbitrarily suspended human rights?

The ragtag army, allegedly flush with foreign funds and super abundance of resources, is implacably opposed to the very values that India enshrines as an ancient civilization and as a modern democracy. This is the cabal that mounts psychological warfare against the majority community, one which has welcomed the persecuted Jews, Zoarastrians, Christians and Mohammedans with open arms, swears by sham secularism, spreads fake news, compels the government to hold dialogues with a known sponsor of global terror, cries wolf when jihadis are jailed and file midnight petitions at the apex court to save them from the gallows.

7 thoughts on “Has India lost the proxy war?”