Double cross and deceit by the Pakistan army 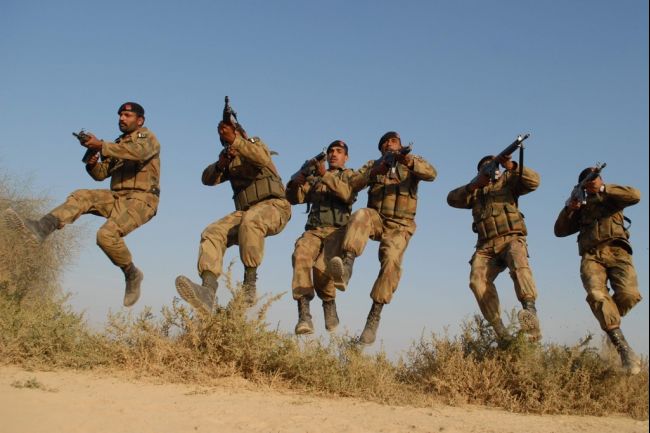 Nawaz Sharif, Prime Minister of Pakistan, is a very lonely man today; undoubtedly he would also be sad, dejected and depressed by the manner in which he has been let down by the generals of his own country’s army that is sworn to serve his democratically elected government. In his case such double cross and deceit has happened not once but twice.

…Nawaz Sharif lost his chair on the previous occasion also because of his so-called “soft stand” towards India. This can be counted as one of the major causes for the situation but it is definitely not the main one.

The role of the Pakistan Army in boosting both Imran Khan and Tahirul Qadri with the specific intention of weakening/toppling the legitimate, democratically elected government of the country is, by now, well documented. If there were any doubts they have been cleared in ample measure by the statements of Javed Hashmi, the President of Imran Khan’s Pakistan Tehreek-e-Insaaf (PTI) which implicate that his party chief of playing to the tune of the “establishment” (Pakistan Army). Hashmi has been sacked from membership of the party for speaking the truth. Qadri, in any case, loses no opportunity in singing paeans in praise of the Army, thus leaving no doubts whatsoever about his affiliation and loyalty.

In an abominable expression of subservience to the army both Imran Khan and Tahirul Qadri were indecent in their haste to meet General Raheel Sharif and accept his role as a mediator. It was as if they heaved a sigh of relief on the end result having been finally achieved. The manner in which their paid cadre cheers the army leaves no doubt as to where the finances are coming from.

In India the popular perception is that the Army is gunning for the Prime Minister of the country because he attended the swearing-in ceremony of Prime Minister Narendra Modi and expressed determination to normalise relations. It is notable that PM Nawaz Sharif lost his chair on the previous occasion also because of his so-called “soft stand” towards India. This can be counted as one of the major causes for the situation but it is definitely not the main one.

There is no doubt that the Pakistani generals do not want to see any forward movement in India-Pakistan relations since any such step would contradict all that they stand for. However, Pakistan army has the clout to sideline the government and carry on with its anti-India machinations through its evil Jihadi partners; after all, it has been doing so for decades. In fact, the Pakistan army rolled out its response even before Nawaz Sharif got back after his visit to India. It heated up the line of control (LoC) and the international border (IB) with ceasefire violations of an unprecedented intensity. Apparently, it would need more than India policy for the establishment to openly gun for the government.

Nawaz Sharif failed to read the writing on the wall and did not give the honourable exit to Musharraf that was being demanded.

The army and Prime Minister Nawaz Sharif have had an uneasy relationship right from the word go! In the initial stages it was said that the new government of Pakistan would settle down only after General Kayani was eased out. Many heaved a sigh of relief when this happened and PM Nawaz Sharif got an Army chief of his choice and kinship in the shape of General Raheel Sharif. The bonhomie however did not last too long.

General Raheel Sharif was visibly upset by the manner in which his life time mentor General Pervez Musharraf was being tried for treason. Nawaz Sharif failed to read the writing on the wall and did not give the honourable exit to Musharraf that was being demanded.

Nawaz Sharif procrastinated and remained indecisive in dealing with the Taliban when the army was insisting on a firm and immediate action. The long period of talks and subsequent humiliation of the government in the hands of the Taliban raised heckles of the army. Of course, the army has not much to show in the subsequent Operation Zarb-e-Azb launched in North Waziristan which indicates some wisdom in Nawaz Sharif’s attempt to go for a political solution, but it has put all blame on the government.

The final nail in the coffin was stuck on failure of the government to support the army when Geo Television accused the Inter Services Intelligence (ISI) chief Lt General Zaheerul Islam of shooting its prime correspondent, Hamid Mir. Nawaz Sharif went to the extent of plotting the sacking of the ISI chief.

The events in Pakistan have an impact on India; the Pakistan army wishes to keep its traditional bogey of anti-India sentiment alive through this fight for its survival.

The army may have plotted its move to destablise Nawaz Sharif meticulously but the cards are no longer stacked in its favour. The entire parliament and democratic forces of Pakistan are behind Nawaz Sharif and so is the international community, most prominently the United States. As of now the Army is no longer playing the role of an arbiter with the focus having shifted to the Supreme Court.

Nevertheless, the power of the army in Pakistan cannot be underestimated; the environment is rife with talk of a “soft coup, creeping coup” and what not. The agenda of the army is, quite obviously, to wrest foreign policy especially with respect to India and Afghanistan from the government. However, this time round the force will not be able to sit on a high moral ground, proclaim the government to be corrupt and inept and take over the reins; democratic forces are determined not to go down without a fight and the people are witnessing the diabolic act that is being played out.

The events in Pakistan have an impact on India; the Pakistan army wishes to keep its traditional bogey of anti-India sentiment alive through this fight for its survival. It has, therefore, called upon its Jihadi friends to keep the LOC/IB heated up and anti-India propaganda going, troops deployed along the border are rendering active support.

India needs to understand the idea behind the unusually intense ceasefire violations and infiltration attempts. While giving a more than adequate response on ground as rightly advocated by the Indian Army Chief it is also necessary to sensitise the international community about what is happening. India can also expect enhanced belligerence from across the border as the Pakistan army loses ground. The Nation therefore needs to stay prepared for the worst.

3 thoughts on “Double cross and deceit by the Pakistan army”