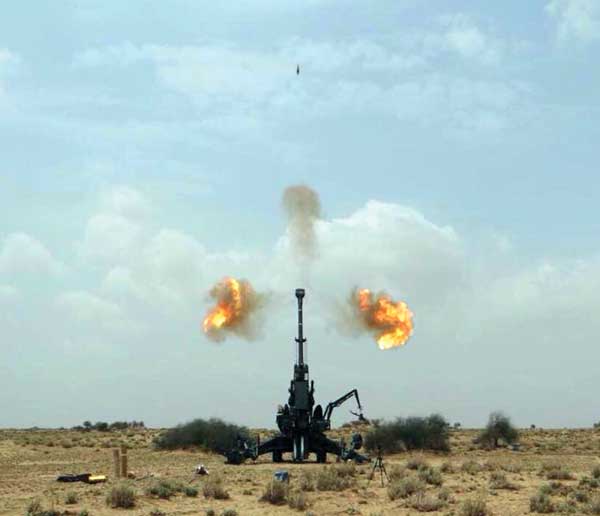 Dhanush as an artillery system has proved to be one of the best amongst its class. A 45 Calibre towed gun system capable of targeting at long ranges incorporating autonomous laying features and having one of the most sophisticated suites of electronic and computing systems in the world.

…the success of 155mm/ 42 Cal Dhanush under trial is of paramount importance for the futuristic ATAGS programme.

A leading Indian daily “The Times of India” quoted the defence minister, Mr Manohar Parrikar when he addressed the parliamentary consultative committee on defence on April 21, that the 155mm/45-calibre Dhanush howitzers had “successfully met all technical parameters” during the winter and summer trials at Sikkim and Pokhran. He also stated that Dhanush incorporates “many improved features” over the Army’s existing artillery guns.

This revelation has created a buzz amongst the arms manufacturers and rightly so since Dhanush as an artillery system has proved to be one of the best amongst its class. A 45 Calibre towed gun system capable of targeting at long ranges incorporating autonomous laying features and having one of the most sophisticated suites of electronic and computing systems in the world.

In the current twelfth army five year plan 2012-17, which is in consonance with Artillery Profile 2027, the Indian army plans to upgrade its existing field regiments presently equipped with 105 mm Indian Field Gun, 105 mm Light Field Gun and the Russian 122 mm guns to the 155 mm towed gun system as a universal inventory. This would imply a higher operational preparedness and greater logistical efficiency. Smarter logistics management systems achieved through inventory streamlining and standardisation will act as a force multiplier in the modern day’s hi-tech battle field environment.

Thus the artillery rationalization plans key objective is to standardize the equipment profile from a multitude of calibre of guns to a single calibre would be achieved. It stands to gain advantages in terms of streamlined logistics, easy maintenance and repairs including standardization of ammunition.

Presently the DRDO is developing 155 mm / 52 Cal Advance Towed Artillery Gun System (ATAGS) that will upgrade the 155 mm / 45 Cal Dhanush in future. The Advance Towed Artillery Guns System (ATAGS), a light-weight long-range automated gun being developed by DRDO with private participation, will be ready for production by 2019 after undergoing six years of development and testing.

Going by the views of experts on gunnery; the physics part of it has proved that a 155mm / 52 Cal is an optimum technical parameter within its class in achieving maximum range with highest accuracy. A sources at the Integrated Head Quarters of the Ministry of Defence, say that the success of 155mm / 42 Cal Dhanush under trial is of paramount importance for the futuristic ATAGS programme. The success of Dhanush in all the major trials held so far has brought in cheers and much needed hope to all those who wish to see indigenisation and self-reliance in defence sector a reality. He further added that Dhanush is 87 percent indigenous baring the Auxiliary Power Unit (APU) which is from BAE SYSTEMS and the sighting system from SAGEM. Indian private company FORCE MOTORS is developing an APU which will replace the existing foreign make in times to come.

Extolling the virtues of Dhanush further, sources informed the IDR that this gun system has laid the foundations for India catapulting itself straight on to the world stage. India will soon emerge as a leading Artillery Gun design and manufacturer in the form of evolution of ATAGS, which would be the highly advanced version of Dhanush. It will potentially take over guns in this category in the future. “Its long range, light-weight and automation features will help it immensely. Loading ammunition will be fully automatic, and it will be compatible with various kinds of ammo as well. Private players like Tata, Larsen and Tubro, Bharat Forge have all been roped in to complete the project,” this official added. 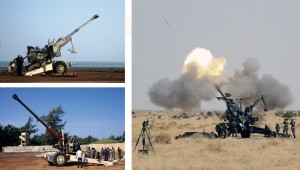 He further added that the ATAGS concept design is ready. “It will weigh 12 tonnes — two tonnes lighter than other guns of its category. It will also be capable of shooting off five successive rounds in short duration. Total development will take three years and testing will last for another three.

Interestingly in 2013 the Project Dhanush had reached the stage of being scrapped in all together. This was after a barrel bust during one of the field firing trials. The military experts and the DRDO scientist were demoralised and had virtually given up the hope. A little encouragement from the then Director General (DG) Artillery had put the project back on track and today it is at the verge of making one of the leading success story of the much criticised DRDO.

Its long range, light-weight and automation features will help it immensely. Loading ammunition will be fully automatic, and it will be compatible with various kinds of ammo as well.

Dhanush as a concept had very few believers! History of indigenous gun development in India commenced in 1970’s when an Artillery Gun Development Team under Brig Gurdyal Singh started functioning in Gun Carriage Factory, Jabalpur. This developmental effort of all stakes holders led by user and supported by manufacturer, designer and the maintenance agencies paid very rich dividends.

As per our sources, the Gun Development Team and OFB could place India among the few nations having capability of designing and manufacturing artillery guns. The Gun Development Team continued till late 1980’s and it contributed to successful development of 105mm Indian Field Gun and the Light Field Gun. While the development team had done a remarkable job, unfortunately it was discontinued allegedly under pressure from the international arms manufacturers. This resulted in loss of developmental capability for next generation artillery guns.

The 105mm systems were basically mechanical guns with no automation and electronics. The other artillery gun developing nations, thus, took a lead in working on automated guns in 1970’s. The gap of two lost decades of gun development in India resulted in huge technological gap vis-à-vis developed countries. The evolution of project Dhanush was to bridge this gap in a short span of less than two years.

A comparison of Technical features of Dhanush vis-a-vis in-service 155/39 Cal Bofors guns are as follows: 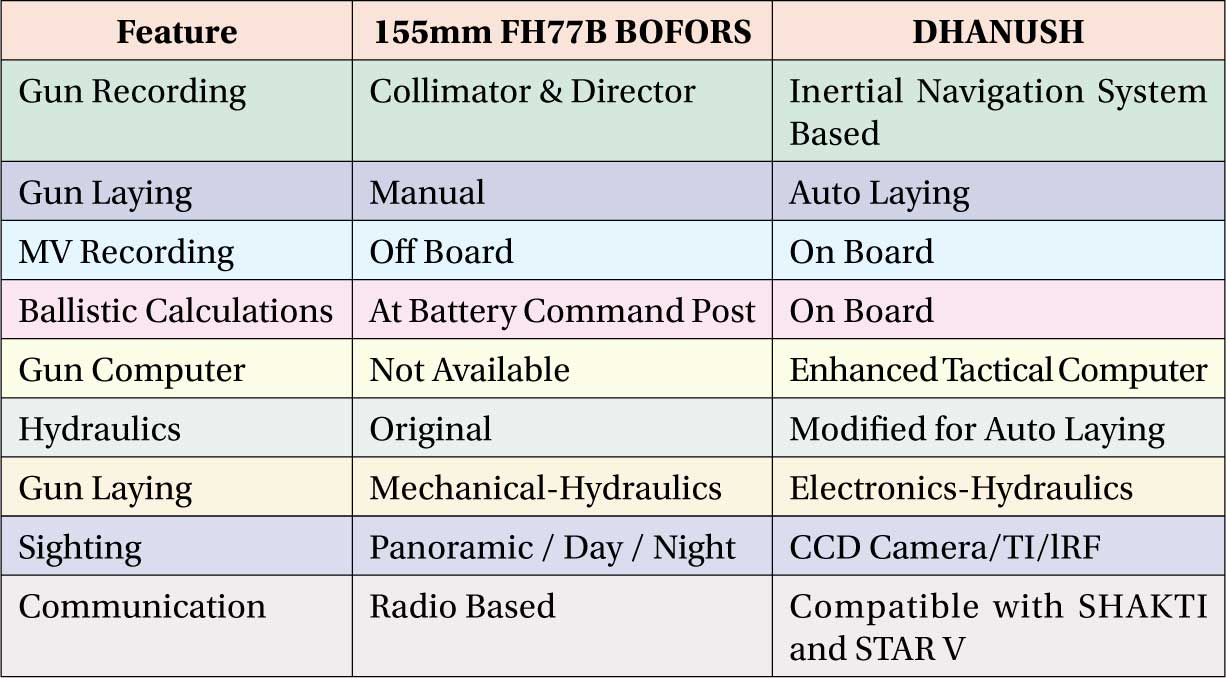 The electronic suite is a module package, combining a hybrid (Inertial+GPS) Navigation System, a Muzzle Velocity Radar (MVR) and powerful Software solving in real time the ballistics for static or moving targets and for any combination of projectile-change available. The Inertial Navigation System (INS) is an extremely precise system determining the elevation and northing angles of the gun. The system corrects automatically the firing for any variation in ammunition, charge or meteorology. Auto laying is adaptable to any orientation and elevation system hydraulically or electronically powered, it provides an effective solution for automatic laying of the gun barrel.

This 155mm and 45 calibre gun has a maximum effective range of 38 km in plains while the original Bofors gun could not fire effectively beyond 27 km.

The main elements of the Electronic Suite integrated with the gun have EMI/EMC compatibility as per the Standards laid down by the Indian Army and they are as follows:-

It is important to place on record a little known fact about this Project Dhanush. It was started with a unique initiative from Lt Gen Anjan Mukherjee, an Artillery Officer, who was then Director General of Financial Planning (DGFP) maintained the need for in self-reliance in artillery capabilities. The visionary leadership of DGFP, who later took over as DG Artillery, resulted in creation of the road map for initiating the programme for indigenous development of the 155 mm gun during March 2011.

Danush is going to be a first successful flag ship venture under the much hyped ‘Make in India’ mission.

With very few optimists in the environment, this small team started taking big steps in gun development capabilities, with a mission to develop a state of art weapon system using available knowledge and manufacturing capabilities of the nation.

After these extensive trials and validations likely to be completed by the year end, Dhanush would be produced in bulk at the Gun Carriage Factory in Jabalpur. The Army has already placed an initial order of 114 such guns. Dhanush is an improved indigenous version of the Swedish Bofors. This 155mm and 45 calibre gun has a maximum effective range of 38 km in plains while the original Bofors gun could not fire effectively beyond 27 km. One can conclusively say that Danush is going to be a first successful flag ship venture under the much hyped MAKE IN INDIA MISSION. 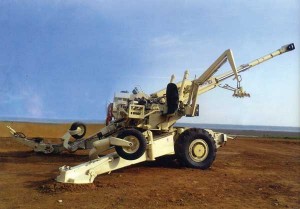