Demographic invasion of India from the North East

Six decades of ‘Indian effort’, still Seven Sisters have not been fully integrated with the main landmass. Thousands of crores of money has been pumped into the North East. In fact our  Central Govt is indirectly financing the underground governing bodies who de  facto continue to rule the roost. The problem has been further accentuated by uncontrolled illegal migration from Bangladesh, the situation in the ‘Gateway to the North East’, the ‘Siliguri Corridor’, where insurgency is brewing and is likely to become a major security concern for our country.

As per 2001 census the population of India is approximately 1.02 billion, almost three-fold increase in population of 1947. The three-fold increase is attributable to, inadequacy and inconsistency of India’s family planning programme, (bureaucracy had to tow the line of their political masters) illiteracy, religious disbeliefs, backwardness of the people, underprivileged condition of women in India, poor health facility and so on. But no one bothered to mention that one of the reasons is presence of over 26 million Bangladeshi illegal migrants in India.

At the time of partition, in East Pakistan (now Bangladesh) the Hindu population was 25.6 percent. It got reduced to 14 percent in 1991 and today it has come down to abysmal 7 percent.

Bangladesh has the highest density of population in the world, the density of its population is 982 persons per/sq km. North Eastern States on the other hand are sparsely populated with average density of little over 215 persons per sq km. Principle of void theory in law of nature has taken its course. In addition not so good economic conditions in Bangladesh have forced people to embrace more lucrative options. This is not only true for this region, Mexican influx into south western United States of America is most recent phenomenon. Large-scale demographic movement continues to take place in the NE, resulting in demographic imbalance in states. In the state of Tripura imbalance has resulted in “demographic inversion”. After the partition, till 1971, there was a massive population influx caused by political, communal and economic reasons, which created serious ethnicity problems in these states. At the time of partition, in East Pakistan (now Bangladesh) the Hindu population was 25.6 percent. It got reduced to 14 percent in 1991 and today it has come down to abysmal 7 percent.

Earlier the minority community were literally forced out of East Pakistan (now Bangladesh), primarily due to religious reasons and now mass exodus is taking place due to ‘economic reasons’ by both the communities. Flow of illegal migrants though in small measure continues post 1971 and the progressive cumulative effect is acquiring alarming dimensions. However, when secular democracy was replaced by autocracy following the murder of Sheikh Mujibur Rehman in 1975, hard-core Islamic Fundamentalists were encouraged to infiltrate into North-eastern states to carry out anti national activities and destabilise the democratic system. The bulk of these migrants initially egressed into states bordering Bangladesh. In addition a large number have infiltrated into almost all parts of India including Delhi, Mumbai, Lucknow and other cities for greener pastures creating economic and law and order problems. Vote bank politics as usual supersedes national interests. Assam, Tripura, North Bengal and Meghalaya face maximum threat to the security in this region due to illegal migration. Gradually, this malaise is spreading to other states like Sikkim, Mizoram, Manipur and Nagaland. Even landlocked Himalayan Kingdom of Bhutan is also sitting on the brink of demographic implosion.

Documents and surveys show enough evidence that migrants from Bangladesh are a deciding factor in 23 to 25 Parliamentary and 117 to 127 Assembly Seats in India.

Besides the illegal migrants, there are settlers from other states who have come to these states in search of job opportunities have further compounded the ethnic strife. This influx of infiltrators and internal migration have outnumbered the sons of the soil and causing socio-economic tensions and frustrations over employment opportunities. They are also considered threat to the language and culture of NE. This coupled with the inconsistent approach of the Union Government to bring the people of these States into the mainstream continues to catalyse the growth of militancy in the region.

Mushrooming madarsas, indoctrination at Pakistan sponsored Inter Services Intelligence (ISI) camps (156 known camps) in Bangladesh and pumping in of counterfeit currency in the region are all indicators that insurgency is once again raising its ugly head and is likely to acquire serious dimensions if not checked, controlled and contained speedily, timely and adequately. ISI is taking full advantage of uncertain situation in Nepal, law of jungle states of northern UP bordering Nepal, Bihar and the North East as also as part of its grand design to shift the focus and centre of gravity to much more vulnerable and sensitive areas as also to relieve the pressure in the western region. This is part of a deliberate nefarious design of the ISI to destabilise most sensitive North East region, seriously threatening secular democratic system in India and threatening “Silliguri corridor”.

Documents and surveys show enough evidence that migrants from Bangladesh are a deciding factor in 23 to 25 Parliamentary and 117 to 127 Assembly Seats in India.

India shares 4096 km of border with Bangladesh and it costs Rs three crores per km to effectively police this border, i.e., on account of manning of border by policing force, construction and maintenance of border roads, border fencing, riverine patrols, watchtowers and so on. Over three scores of battalions of Border Security Force are presently policing the border which is woefully inadequate. For effective domination and policing requirement is well over 100 battalions. The government has been able to fence only 987 km of this border till now. Rs. 2300 crores are being spent every year in guarding this border. (WB-2217 Kms, Assam-262 Kms, Meghalaya-443 Kms, Tripura-856 Kms, Mizoram-318 Kms).

Assam: The Victim of Outsiders Effect

Assam is the mother state of the North-East, any instability in this state is bound to have cascading effect in other six sisters. It has 74 percent of total population of the North East. In 1826, Assam was annexed by the British by virtue of the ‘Treaty of Yandabu’ and made part of Bengal presidency. The British in pursuit of their ‘Divide and Rule’ policy, partitioned Bengal in 1905. Assam lost its separate identity and became part of a Muslim dominated East Bengal. In 1911 partition of Bengal was annulled and Assam again became a separate province.

Emerging trends in the region indicate that Muslim Fundamentalist Organisations (MFOs) are joining hands with the militants and disgruntled elements of the society to raise anti-India tirade or separatist movements.

The British imported tea garden labourers from other provinces, as the Assamese were not willing to work as labourers. They also imported peasants from East Bengal, mostly Muslims, to work on virgin land in Lower Assam to meet the growing demand for food in the wake of the large movement of population. The growth of a large Muslim population in the province helped the Muslim League to gain ascendance in Assam. In the 1940s, the demand for Pakistan as a separate homeland for Muslims gained momentum.

The Muslim League wanted Assam to be included in East Pakistan. In 1946, Assam and West Bengal were grouped together. Although, Congress High Command agreed to the grouping, Shri Gopinath Bordoloi, the leader of Assam Congress was quick to see the danger in grouping Assam with Bengal. He rebelled and demanded rejection of grouping plan, thus Muslim League’s plan to get Assam included in East Pakistan was foiled. Zulfikar Ali Bhutto in his book “Myth of Independence” wrote, “It would be wrong to think that Kashmir is the only dispute that divides India and Pakistan. One at least is nearly as important as the Kashmir dispute, that of Assam and some districts of India adjacent to East Pakistan. To these, Pakistan has very good claims. East Pakistan must include Assam to be financially and economically strong”. Wise words, but unfortunately during his lifetime he had to helplessly watch the formation of Bangladesh.

The unabated influx of illegal migrants from Bangladesh/East Pakistan has been continuing after Independence. In 1970, the population of East Pakistan was 7.5 crores but in 1974 it had come down to 7.14 crores. On the basis of 3.1 percent annual growth, the population should have gone up to 7.7 crores. The shortfall of 60 lakhs people can be explained only by large-scale migration. The statistical data on demography speaks for itself. 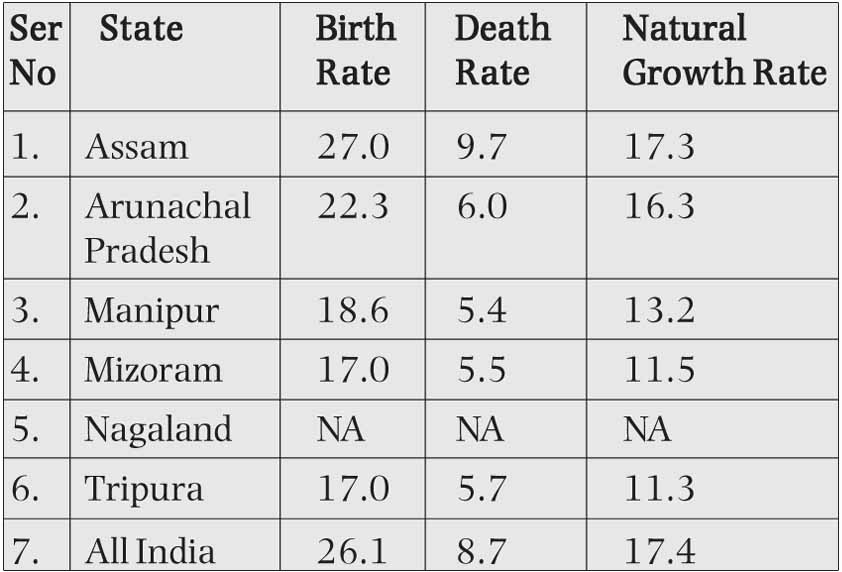 13 thoughts on “Demographic invasion of India from the North East”