The scientific process of Net Assessment is characterised by a study of trends and triggers. Evolutionary change in the geo-strategic environment can be described in the form of trends. Trends refer to extrapolation of a particular phenomena based on its previous performance. A trigger on the other hand, denotes abrupt changes in trends.

An interplay of associated trends and triggers, which will shape the nature of the future environment, is termed a driver. Some of the key drivers of change that will shape our National Security environment are :-

Each driver is characterised by the degree of its impact, and, the certainty of its occurrence. It is in these terms that the demographic driver of change is fast acquiring the contours of a key scenario driving driver that will have a major impact on our national security. Unfortunately, in security circles, this remains one of the least studied and analysed phenomenon. Demography is deemed too esoteric a subject that should engage the attention of our economists, rather, our military strategists and security analysts.

Also read: Demographic invasion of India from the North East

This paper will endeavour to shed some light on this abstruse subject, and highlight the fact, that the demographics of our population are fast becoming – not just a cause for security concern but serious alarm. They are already beginning to make serious impact on our internal security scenario via the phenomenon of tribal Left Wing Extremism. So serious is the impact of these looming changes that they need a response on an emergent basis and a national scale. The response has to be paradigmatic in its sweep and change, and could lead us to question some basic premises of our growth paths and developmental strategies. A failure to change direction in time could generate internal security stresses and challenges on a scale that could be cause for serious alarm and introspection.

Though India occupies only 2.4 per cent of the worlds land area, it supports over 16 per cent of the world’s population. Currently it is the world’s second most populous country after China.1 However, in less than 40 years it will replace China as the world’s most populous country. 2  The very size of the Indian population generates serious pressures on key resources availability. However, it is not merely the size of this massive population base that generates Malthusian scenarios of doom in an era of peak oil, fossil fuel drain out and scenarios of water stress and food crises. 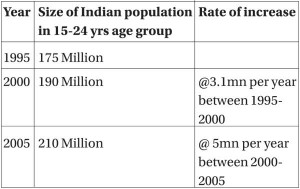 What is becoming a more immediate cause for internal security concern, is the age structure of this population. India will remain for some time the youngest country in the world. A third of India’s population (writes Jayati Ghosh) was below 15 years of age in 2000.3 The following chart traces this rising “youth bulge” in India’s population structure. 4

The youth bulge in the Indian age structure forms a sharp contrast with the graying of the population that is likely to occur in the other countries.

Thus, in the year 2020, the average age of a citizen in the following countries will be as under:- 5

This youth bulge in the Indian population’s age structure is being touted by some economists as a demographic dividend that has already put India on a new growth trajectory of a 9 per cent per annum from its former ‘Hindu rate of growth’ (3.5 per cent). The population bulge in the working age groups is seen as an inevitable advantage – or the much-touted demographic dividend.6 Countries with the bulk of their citizens in the pensioners’ age group have to cater for massive unproductive pension and health care bills. The smaller productive work force has to cater for the huge non productive graying segments.