In almost all of the biennial White Papers on National Defence, the Chinese government has stated that additional funds are needed for the modernisation of the PLA. The requirement of additional funds for force re-structuring and a qualitative increase in the levels of training is emphasized in the White Papers. Rising inflation is also cited as a reason for increased defence expenditure. However, nothing in the recent White Papers fully explains the double-digit growth in the annual defence expenditure. In response to international calls for greater openness, one Chinese military official wrote, “Transparency is a tool of the strong to be used against the weak.” It is this lack of transparency that has fuelled speculation about an arms race.

Complete transparency in defence spending has seldom been a strong point even among countries that take pride in being liberal democracies. According to the late Air Commodore Jasjit Singh, “All countries try and protect what they consider to be crucial information about their defence capability for understandable reasons; and defence expenditures are obviously part of that information except where democratic states practice greater transparency as part of their liberal ethos, domestic obligations and public oversight, and well established procedures of accountability…” Totalitarian regimes like the one in China do not practice egalitarian accounting principles neither do they have a real grip on all the details of what they actually spend.

China’s actual military expenditure is far higher than the officially published figure. This year, it is expected to cross $200 billion. Professor David Shambaugh, a Washington-based China analyst, finds China’s defence budget the most difficult aspect of the country’s armed forces to research. In his view, “Few areas of China’s military affairs are more opaque and difficult to research than the revenue/expenditure and budget/finance domains. – but perhaps none is more important to understand.”

David Shambaugh lists several items of expenditure that do not figure in China’s Official Defence Expenditure (ODE), “China’s official defence budget does not appear to include all funds for:

Ted Galen Carpenter and Justin Logan point out that greater transparency would be in China’s interest, “China needs to recognise that it gains little from opacity in comparison to what it loses… Any respectable observer of the People’s Liberation Army knows about China’s growing capabilities. We know about the Sovremenny destroyers, the Sunburn missiles and the Kilo submarines. We know about the Sukhoi 30s and the new F-10 fighter. Large-scale hardware acquisition and development is hard to hide.”

China’s ODE overtook that of Japan ($42 billion) and Germany ($37.5 billion) in 2007, but at that time still lagged behind the United Kingdom ($62.38 billion) and France ($50.78 billion) whose economies are now much smaller than that of China. It is still a small fraction – less than one-fourth – of the United States’ annual defence budget of approximately $600.00 billion; not counting the supplementary grants of about $75 to 80 billion sought by the Pentagon separately every year for ongoing war(s). The US expenditure on defence is almost half – 48 per cent – of the total defence budget of the world. China, France, Japan and the United Kingdom each spend four to five per cent of the world’s total defence expenditure.

China’s military aims and modernisation strategy have been enunciated in its White Papers on National Defence, “…a three-step development strategy in modernising China’s national defence and armed forces, in accordance with the state’s overall plan to realise modernisation. The first step is to lay a solid foundation by 2010, the second is to make major progress around 2020, and the third is to basically reach the strategic goal of building informationised armed forces and being capable of winning informationised wars by the mid-21st century.” 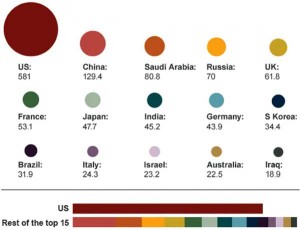 China is investing heavily in modernising its surface-to-surface missile firepower, fighter aircraft and air-to-ground strike capability. It is acquiring strategic airlift capability, modern aircraft carriers, new submarines, improving command and control and surveillance systems and is enhancing its capacity to launch amphibious operations. Besides an all-weather railway line to Lhasa, China is engaged in constructing new missile bases, airfields and roads and military encampments close to the border.

With the improved logistics infrastructure in Tibet, including the Gormo-Lhasa all-weather railway line, newly constructed road axes with good lateral roads linking them and many new air strips, the Chinese are now capable of inducting larger numbers of troops into Tibet in a shorter timeframe and sustaining them for longer durations. In recent military training exercises and war games, the PLA has been practising rapid deployment of its airborne forces in Tibet and elsewhere and amphibious landing operations to simulate landings on one or more of the disputed islands. The trends in the procurement of military hardware and training activities are indicative of future plans for strategic outreach.

Despite the long list of obsolescent weapons and equipment in service with the Indian armed forces, the present military gap with China is still quantitative rather than qualitative. In case India’s military modernisation continues to stagnate, this gap will soon become a qualitative one as well. By about 2020-2025, China will complete its military modernisation and will then be in a position to dictate terms on the resolution of the territorial dispute if India continues to neglect defence preparedness.

The lack of progress in replacement of the Indian Army’s obsolescent weapons and equipment and its qualitative modernisation to meet future threats and challenges is particularly worrisome as the Army continues to be deployed in large numbers on border management and internal security duties. It needs to upgrade its rudimentary C4I2SR system and graduate quickly to network centricity to optimise the use of its combat potential. The mechanised forces in the plains are still partly night blind, the capability to launch offensive operations in the mountains continues to remain inadequate to deter conflict. The capability to launch precision strikes from ground and air-delivered firepower, which will pave the way for the infantry to win future battles, is much short of the volumes that will be required.

Given India’s increasing vulnerabilities and rising international demands on it to act as a net provider of security as a rising regional power, the country’s defence expenditure is inadequate to create the capabilities that the armed forces will need in future. India needs to invest more in improving the logistics infrastructure along the border with Tibet, in hi-tech Intelligence, Surveillance and Reconnaissance (ISR) systems for early warning and in generating land and air-based firepower asymmetries to counter China’s numerical superiority. The Indian army is in the process of raising and suitably equipping a Mountain Strike Corps to carry the fight into Chinese territory if it ever becomes necessary. Without sufficient funding support, it will remain in limbo and never become the potent force that it has been designed to become.

All of these capabilities will require a large infusion of fresh capital. Presently, India’s defence budget – 1.74 per cent of its GDP – is too low to undertake the capacity building necessary to deter China from contemplating another border war. The defence budget needs to be increased gradually to first 2.0 and then to 3.0 per cent of the GDP. India’s growing economy should be able to sustain this hike in the defence budget over a period of three to five years, especially if the government simultaneously shows the courage to reduce wasteful subsidies.

The reasons for India’s lackadaisical approach to military modernisation include the shortage of funds on the capital account for major defence acquisitions, the inability to spend even the allotted funds due to bureaucratic red tape in decision making and the lack of a robust indigenous defence industry because of excessive reliance on incompetent Ordnance Factories and defence PSUs. India’s political leadership and the bureaucracy must learn to look at defence expenditure as a form of insurance. If properly utilised, it deters military adversaries from contemplating war and enables the armed forces to acquire the capabilities necessary to fight and win if deterrence fails.