India boosted defence spending by 12.5 percent in 2014-15 over the previous year in a budget presented on 10 July and further opened the domestic weapons industry to foreign investment to help rebuild the military and narrow the gap with China.

The present defence expenditure of 1.78 per cent of the GDP is just not sufficient for the modernisation of acutely deficient defence forces when the threat perception from our adversaries is looming large.

India has been the world’s top arms buyer for the last three years, trying to replace an ageing Soviet-era military with modern weapons as a deterrent to a rising China, with which it fought a war more than half a half century ago.

The capital budget went up from Rs 89,588 crore in February’s interim allocation to Rs 94,588 crore. The revenue budget remains Rs 1,34,412 crore and Rs 1,000 crore was allocated for the rollout of the one-rank-one-pension policy announced by the previous government.

The capital budgets of the army, navy and air force stayed at roughly the same levels allocated in February. The army will have Rs 20,665 crore for modernisation; the navy Rs 22,312 crore and the air force will have Rs 31,818 crore for new equipment.

There has been a massive increase in funding to the Defence Research & Development Organisation (DRDO). DRDO’s capital allocation of Rs 5,985 crore, provided in February’s interim Budget, has been increased by almost 60 per cent to Rs 9,298 crore — the largest jump in DRDO’s history. 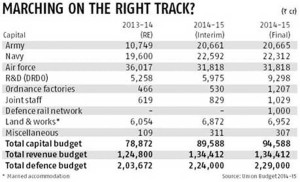 The capital allocation for the Ordnance Factory Board (OFB), which will be used for modernising the ministry’s network of 41 factories that manufacture arms, ammunition and equipment for the military, was doubled. The OFB’s allocation of Rs 530 crore has been raised to Rs  1,207 crore.

Beside big raises for DRDO and OFB, another beneficiary is a new project for building a “defence rail network” in the border areas. This network, allocated Rs 1,000 crore, is meant to facilitate the quick move of heavy equipment from cantonments in the interior to border areas. Under this project, a number of meter gauge lines will be upgraded to broad gauge.

The tri-service “joint staff” headquarters is the other beneficiary of this Budget, with its allocation raised to Rs 1,029 crore from Rs 829 crore in February. Defence analysts are wondering whether this will be followed by appointment of a tri-service (CDS) chief of the defence staff/permanent chairman of the chiefs of staff committee as recommended by Kargil and Naresh Chandra Committees respectively.

In recent years, India has repeatedly expressed concern about China’s rapid development of rail and road infrastructure along sections of the disputed border in several sectors, including those in Arunachal Pradesh.

“Urgent steps would also be taken to streamline the procurement process to make it speedy and more efficient,” Jaitley said, in an apparent reference to several defence deals being hit or scrapped due to the alleged payment of kickbacks and involvement of middlemen.

PM Narendra Modi has signalled his intention to give domestic industry a greater role in producing modern equipment with foreign investments.”Our domestic manufacturing capacities are still at a nascent stage. We are buying substantial part of our defence requirements directly from foreign players. Companies controlled by foreign governments and foreign private sector are supplying our defence requirements to us at a considerable outflow of foreign exchange,” Jaitley said.

“Currently we permit 26 per cent FDI in defence manufacturing. The composite cap of foreign exchange is being raised to 49 per cent with full Indian management and control through the FIPB route,” he said.”Companies controlled by foreign governments and foreign private sector are supplying our defence requirements to us at considerable outflow of foreign exchange,” he said.

The rise in India’s military spending comes as Western governments are rushing to visit the new administration in New Delhi in the hope of landing multi-billion deals. Politicians from France and Britain have held talks in New Delhi, while the United States, which has built close military ties, is also pushing for faster decisions on arms contracts.

Global arms firms are wooing India in the hope of landing multi-billion dollars and New Delhi is aiming to leverage some of that buying power to get transfer of technology and end the overwhelming reliance on imports.

Jaitley also set aside an initial sum of Rs.100 crore to set up a “Technology Development Fund” to support public and private sector companies, including small and medium enterprises, engaged in research and development of defence systems. He noted that a separate fund was announced to provide resources to public and private sector companies in 2011, but no action was taken beyond the announcement.

The budget allocated Rs.1,000 crore for 2014-15 to implement a policy of “One Rank One Pension” for ex-servicemen. This allocation would address “pension disparities”.

The Ex Servicemen have reason to be happy that grant of ‘one rank one pension’ (OROP), announced on the floor of the House on 17 Feb 2014, continues to remain on the government’s radar. The veterans’ spirits were buoyed up when the Prime Minister made an OROP commitment from the decks of Vikramaditya. Allocation made in the budget presented by the Finance Minister on 10 July 2014, further reinforces veteran’s belief that this 32-year old demand is nearing fruition.

Navy down to just nine operational diesel-electric submarines at present, with another four stuck in long refits.

OROP implies grant of equal pension to pensioners of same rank and equal length of service, irrespective of their date of retirement. Further, any future enhancement in pension is also to be automatically passed on to old pensioners. This was also clearly accepted by your predecessor in his order dated 26 Feb 2014. Based on this definition, with effect from 1 April 2014, all pensioners that retired prior to this date are to be brought at par with their counterparts of same rank and equal length of service that retire on this date and are to be kept equated with future retirees.

The veterans do not have the data required to compute how much money would eventually be needed to implement OROP. No comments, therefore, can be made regarding adequacy or otherwise of the OROP allocation of Rs 1,000/- Crore in the current budget. Veterans feel that the commitment made in the Parliament on 17 Feb 2014, that whatever additional funds are needed for OROP would be made available.

Some apprehension, however, does arise from what information comes out of the South Block, where parleys among various stakeholders are taking place for finalising the government implementation orders. It is learnt that the CGDA and the PCDA are trying to give a different definition to OROP. While it is incorrect to universalise, the general perception among the veterans is that bureaucracy is antagonistic towards them. This perception draws support from experience. It is fervently hoped that the Modi government would not allow the bureaucracy to hijack the grant of OROP.

The long-pending $885 million deal with the US government for 145 M-77 (Rs 30 crore a piece) ultra-light howitzers is headed for a dead-end, with the Indian defence establishment feeling the artillery guns are way too expensive to buy for the new Army divisions being raised for the border with China.

The Army has been demanding 155mm / 39-calibre lightweight howitzers, with a strike range over 25-km range, for around a decade now. Guns like the M-777, partly made of titanium, can be swiftly airlifted to “threatened high-altitude areas” along the 4,057-km Line of Actual Control (LAC).

French Rafale jet won selection process, which began in August 2007, but project is yet to be inked.  IAF down to just 34 fighter squadrons.

China of course, has built massive infrastructure along the LAC, which allows it to swiftly mobilize troops and equipment to outnumber Indian forces by 3:1 there. The howitzer project, among others, is meant to equip the new XVII Mountain Strike Corps (90,000 troops) being raised to gain “quick reaction force capabilities” against China.

Some of the critical arms and equipment required urgently by the defence forces is given below besides covering up of the deficient 14,500 officers in the army alone:

Even at the elevated spending, India’s military budget is still less than a third of China’s $145 billion expenditure last year…

Jaitley has long called for a militarily strong India to counter potential threats from both China and Pakistan and said it would speed up the pace of arms purchases for the third largest army in the world.

Even at the elevated spending, India’s military budget is still less than a third of China’s $145 billion expenditure last year estimated by the Pentagon in its report to the U.S. Congress.