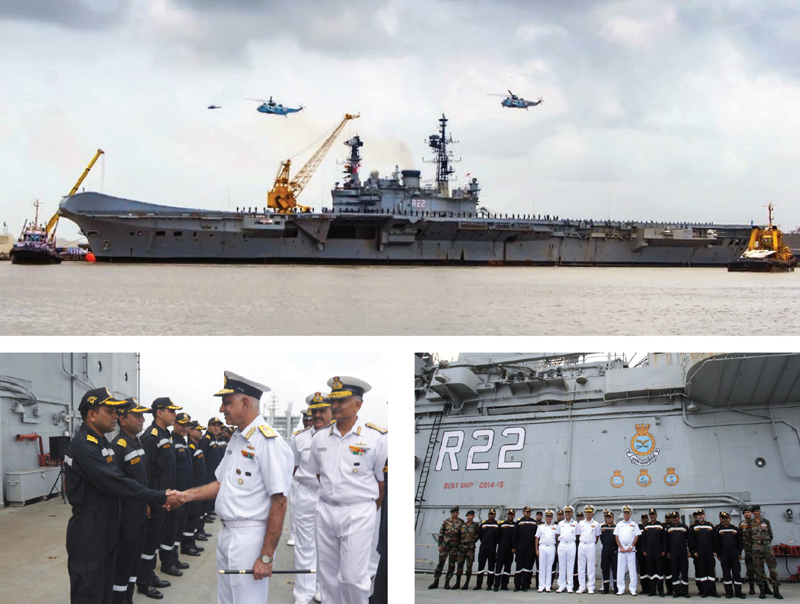 The Aircraft Carrier, INS Viraat set sail for Kochi on 23 July 16 for Essential Repairs and Dry Docking (ERDD) at the Cochin Shipyard. This is the last sailing under her own propulsion as INS Viraat is slated for decommissioning later this year. Vice Admiral Girish Luthra, Flag Officer Commanding-in-Chief Western Naval Command and other senior officers of the command, visited the ship and interacted with the crew prior to her departure. The carrier was escorted out of harbour by Fast Interceptor Craft and helicopters from the Western Naval Command. It was indeed an emotional moment for the Navy, as INS Viraat leaves Naval Dockyard Mumbai, for ‘one last time’ under own power. The ship will be towed back to Mumbai on completion of ERDD, for the decommissioning ceremony later this year.

As the glorious chapter in the Indian Navy’s history draws to a close, the decommissioning of INS Viraat is a symptom of metamorphism the Indian navy is undergoing.

INS Viraat, originally commissioned into Royal Navy as HMS Hermes in 1959, had served for 27 years before joining the Indian Navy on 12 May 1987. She served as the flag ship of Royal Navy’s task force during Falkland Island campaign in 1982. INS Viraat thus has a distinction of being the oldest serving aircraft carrier in the world spanning over 57 years.

INS Viraat arrived at Kochi on July 24, from Mumbai under its own propulsion: The Final Voyage. Here the warship will be stripped of its weaponry, radars and propulsion systems, before being towed back to Mumbai for the decommissioning ceremony in October, this year end.

Indian Navy aspires to be a three aircraft carrier based blue water navy by 2025. INS Vikrant, a 40,000 tonnes aircraft carrier is likely to join the Eastern Naval Command by 2018. And INS Vishal, a 65000 tonnes carrier likely to be a nuclear powered supercarrier that could join the force by 2025.

Till such time the Indian Navy will have to continue being a single carrier force. INS Vikramaditya that joined the navy in 2013 shall be its Flag Ship. She will carry out this arduous task of domination of Oceans, till the turn of the decade.

The relevance of aircraft carrier increase by the day for India as China manouvers to challenge our dominant status in the IOR and beyond. While our focus will remain on continental defence owing to our vast disputed land borders, undeniably there’s lots happening on the high seas.

The fastest growing economy having the globe’s second largest population concentration; democratic India is all poised to be one of the major leaders in world economy. And with this comes the challenge of maintaining peace and harmony in the region for an uninterrupted economic activity to flourish.

Stable land borders, internal security, law and order, securing of SLOC, domination of IOR, protection of our Island territory, as also the sea based strategic assets and areas is what constitute the security challenge of this millennium, that India has to address.

In this overall security matrix, an aircraft carrier plays a vital role. Hitherto, epic sea battles between aircraft carriers have not recurred after World War II, yet their centrality in naval warfare cannot be overruled. Quoting the former Indian naval officer, Cdr Gurpreet S Khurana, who says that the operational concept incorporating carriers also came under the scanner due to the risk to these high-value assets by the proliferation of sea-denial platforms and weapons. For example, the acquisition of submarines by Indonesia and Pakistan in the mid-1960s led to India’s employment of INS Vikrant with much hesitation. Whether the enormous financial investment needed to acquire and operate a carrier can be justified against its need has been another contentious issue. Notwithstanding these protracted debates over the years, the aircraft-carrier has still not followed the battleship into oblivion.

Evaluation of our strategic imperatives bring to forefront the great importance of aircraft carriers in our context in years ahead. The aircraft carriers will play a vital role in domination of IOR, force projection and defence of our Island territory, in support of land battles, safeguarding our SLOC, and supporting economic/strategic stakes that are conspicuously increasing in Afro-Asian states.

India’s security is directly linked to and closely enmeshed with that of the Indian Ocean and the adjoining littoral region (IOR) ergo the area is of primary strategic interest. The Chinese are strategically vulnerable in the IOR and to ensure unhindered energy imports during crisis, they would aim at displacing their rival India’s influence in the region. In that sense, a carrier can best confer on India a capability to maintain its influence in these waters and achieve a strategic “dissuasion” against any inimical extra-regional power.

With the great game being setup in the Asia-Pacific region of South China Sea, India as a regional power can only safe guard its interests by having a strong carrier based blue water navy.

This area is largely a maritime-configured region and lately in South China Sea trouble is brewing. The Chinese President Xi Jinping is reportedly being pressed by his military to initiate a more “forceful response” against an international court’s verdict that rejected Beijing’s claims in the South China Sea and ruled in favour of the Philippines. The military is believed to have asked the President to go all out even if it meant to provoke US.

A true Blue Water Navy is India’s strategic need of the hour. INS Viraat has served in building up the experience and expertise in operating and maintaining these assets. As the last post sounds in October from the decks of INS Viraat, the new dawn is at the horizon.

One thought on “Decommissioning of INS Viraat”