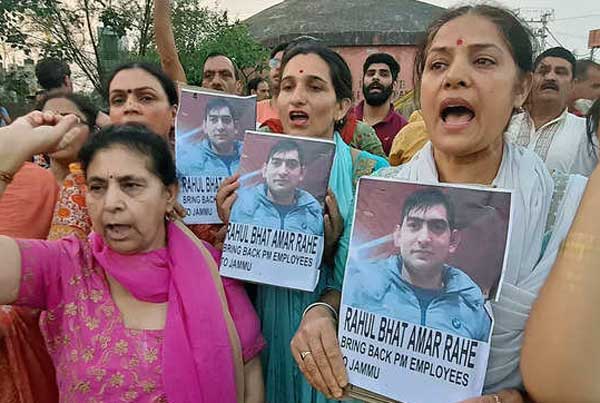 By targeting defenceless men and women belonging to the indigenous minority Hindu community as well as non-locals working in Kashmir, Pakistan sponsored terrorists have succeeded in creating a fear psychosis here. Unfortunately, rather than expressing solidarity and reassuring the terrorised people, local political parties seem to be more interested in extracting political mileage from this humungous tragedy by accusing the government of gross security failure and instigation. While the authorities cannot escape responsibility for being unable to prevent such killings, there’s a need to examine this issue holistically.

How exactly will ‘targeted killings’ of minority community members and non-locals in Kashmir help terrorists in achieving their purported aim of the so called ‘armed struggle’?

The pro-Pakistan lobby and other vested interests have cunningly played the ‘public inconvenience’ card to get a large number of security check posts removed. As terrorists carrying out targeted killings are using pistols which can be easily concealed on their person, a body search is essential to check movement of such assassins.

Furthermore, with the recent killing of a Muslim woman TV artiste, Hindu Kashmiri women teachers, a non-local bank employee and migrant workers, it’s abundantly clear that virtually every Kashmiri is under threat of being murdered by terrorists. So, ensuring effective security for such a wide range of potential targets spread across the entire length and breadth of Kashmir is practically impossible.

Terrorists as well as their Pakistani mentors never tire of trying to legitimise brazen terrorism in Kashmir by eulogising it as a ‘freedom struggle’. In addition, Islamabad keeps demanding UNSC intervention in Kashmir and despite being repeatedly snubbed by the international community for seeking external mediation, it continues to peddle fabricated accounts of excesses and violation of rights here.

So, several questions come to mind. Firstly, doesn’t the rampant killings of defenceless civilians by terrorists in Kashmir tarnish the image of the so called ‘freedom struggle’? Secondly [and more importantly], how exactly will ‘targeted killings’ of minority community members and non-locals in Kashmir help terrorists in achieving their purported aim of the so called ‘armed struggle’? How is it that the so called developed pontificating Western countries remain mute spectators of this ethnic cleansing?

It’s not that this is the first time that Kashmir is witnessing targeted killings. Right from the day terrorism erupted here, senseless violence has been a constant factor and senior Hurriyat leader Prof Abdul Ghani Bhat has himself admitted this by saying that “This movement [terrorism in J&K] began with the assassinations of thinkers and the individuals who held an opinion.”

However, unlike in the past when both the Pro-Pakistan All Parties Hurriyat Conference [APHC] and Islamabad would blame Indian security forces and intelligence agencies for such killings, today, terrorist groups are proudly accepting responsibility for such slayings, albeit under pseudonyms.

Having failed to orchestrate public unrest and anarchy in Kashmir through either APHC or terrorists, ISI was caught between the devil and the deep blue sea.

On the face of it, this new trend of terrorist groups readily taking responsibility for cold blooded murders is tantamount to discrediting the so called ‘armed struggle’, but there’s a definite method in this barefaced act of madness. With its ridiculous claim that Article 370 abrogation violated UNSC resolutions on Kashmir finding no support from UN as well as the international community, Pakistan army’s spy agency Inter-Services Intelligence [ISI] attempted to use APHC for instigating public unrest to show the world that the people of Kashmir were opposed to this decision.

However, this plan failed-a fact that Hurriyat patriarch SAS Geelani himself admitted in his resignation letter addressed to the APHC leadership post Article 370 abrogation by mentioning that “Despite unprecedented restrictions and detention, I tried to reach out to you people, but you were not available.” ISI also made a determined attempt to create mayhem by escalating terrorist activities in Kashmir.

When proactive vigilance along Line of Control [LoC] made infiltration of terrorists and transhipment of weapons and other warlike stores difficult, ISI started using tunnels and drones for this purpose. However, due to excellent synergy between the army, central and local police forces, plus active support from locals fed up with terrorism, a record number of terrorists were neutralised and this put ISI on the backfoot.

Having failed to orchestrate public unrest and anarchy in Kashmir through either APHC or terrorists, ISI was caught between the devil and the deep blue sea. So, with no other option available, ISI was forced to task terrorist groups to create unrest in Kashmir Valley through the self-debilitating strategy of targeted killings.

However, there was a problem- since no responsible nation, group or individual would condone violence against innocent people and hence, ISI cunningly created fictitious terrorist groups and these non-existent entities are taking ‘responsibility’ for the premeditated murder of defenceless people.

Since the government is responsible for ensuring safety of its citizens, necessary measures to prevent such killings by terrorists are necessary.

As seen in Punjab in early 1990’s, information of terrorist and anti-national elements started coming from the people who had seen through the terrorist’s fraudulent game. Till the people of Kashmir don’t stand up and support the security forces the end of terrorism in Kashmir is a long way off.

There’s a definite requirement to ramp up security measures to thwart the menace of targeted killings. Towards this, proactive measures like frisking, as well as enhanced surveillance needs to be re-introduced. Since the government is responsible for ensuring safety of its citizens, necessary measures to prevent such killings by terrorists are necessary. Accordingly, even though it may inconvenience commuters, additional security checks and proactive measures need to be instituted in the larger interests.

•  The fact that targeted killings being attributed to imaginary entities are actually the handiwork of Pakistan based terrorised groups needs to be exposed. This can be easily done by producing apprehended assassins and their supporters before the media so that their confessions can be made public.

•  The façade of communal amity being projected by the pro-Pakistan lobby through vocal condemnation of targeted killings should be unmasked. One way of doing so is by asking them to act on their much-touted concern for the safety and wellbeing of their brother Kashmiris from minority communities by demanding that they be accommodated in secure premises. If APHC doesn’t accept this [which will surely be the case], its doublespeak  would be exposed.

There’s no need to be unduly worried by adverse comments from countries and organisations who don’t practice what they preach and have a proclivity to indulge in selective criticism.

•  Terrorist groups like Hizbul Mujahideen [HM], Jaish-e-Mohammad [JeM] and Lashkar-e-Taiba [LeT] who are denying involvement in such killings should be asked to prove their non-involvement in targeted killings by revealing the identity of the perpetrators. Since these groups boast of enjoying absolute public support, their cadres shouldn’t face any problems in apprehending and exposing the killers.

•  There is a need to up the Diplomatic ante against targeted and Indians should unitedly draw international attention towards targeted killings in Kashmir.

•  The need of the hour is to cease treating incidents of targeted killings as mere statistics and instead highlight the human tragedy which every such senseless murder precipitates.

Since J&K is Indian territory, how New Delhi handles the situation there is strictly its internal matter. As such, there’s no need to be unduly worried by adverse comments from countries and organisations who don’t practice what they preach and have a proclivity to indulge in selective criticism.

On the contrary, India needs to be more assertive and make it clear to everyone that since J&K is experiencing a full-blown Pakistan sponsored proxy war in the form of cross border terrorism, taking appropriate measures to defend its hapless civilians from terrorist violence is the sacred and non-negotiable responsibility of the government, which it will carry out — come hail or high water!