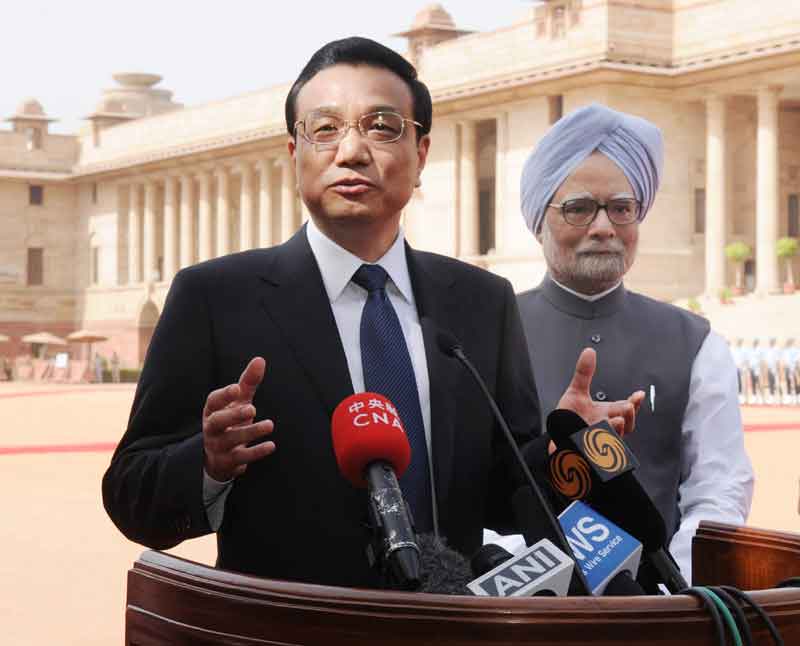 Recorded history shows that India and China have loomed large in each other’s consciousness from well before the first millennium. As both nations became independent almost at the same time, it was inevitable that both will compete for domination in Asia. While China has gone about achieving this goal in a most systematic manner, our China policy is confused, timid and lacks focus and will laid out goals. The result is that Chinese have hemmed us in South Asia and it is ensuring that we are not able to break out from this stranglehold.

A hostile and nuclear armed Pakistan in the West, a sullen Nepal in the Centre, a bullied and frightened Bhutan in the North East and inimical Bangla Desh and Mynamar in the East.

In order to achieve this aim, the Chinese have employed a two pronged strategy. Overland, she is cultivating India’s neighbours – and has managed to put a ring of hostile/inimical states around us. A hostile and nuclear armed Pakistan in the West, a sullen Nepal in the Centre, a bullied and frightened Bhutan in the North East and inimical Bangla Desh and Mynamar in the East. This is amounting to strategic encirclement of India. In the Indian Ocean, the Chinese strategy is better known as string of pearls strategy. The aim is to acquire port facilities starting from Gwader and Karachi in Pakistan, pressurising Maldives and Sri Lanka to grant berthing and refuelling facilities and naval base in Coca Islands in Northern Andamans.

The crucial difference between India and China’s standing in the South Asian Region is one of image. All South Asian nations fear China and in order not to annoy her, try and placate her by acceding to her demands. Whereas in the case of India, these very same nations hold us in contempt – our claim of India being in the race for Asian domination notwithstanding. They see India as a soft power unable to evolve a coherent policy in the neighbourhood and beset with a vast array of internal problems. Our neighbours see us appeasing China at every step and opportunity and feel it may be safer to follow the suit. Coming to our relations with our neighbours. Pakistan is openly hostile, pursuing its aim of balkanization of India with great focus and elan. Our response is patchy, confused and one of helplessness. With every terrorist attack, we run to USA asking her to restrain Pakistan. This is not helping our image in the neighbourhood. No self respecting nation should be whinnying before the super power but should take measures to counter an adversary. As far as Nepal is concerned, despite our bending over backwards to its needs, we have failed to stop it from falling into the Chinese arms.

Bhutan has more or less abrogated the India-Bhutan Treaty of 1950 which requires her to be guided by India in her foreign relations. Not only is she helpless to stop increasing Chinese intrusions into Western Bhutan but negotiating with China independent of India. Chinese want Bhutan to establish diplomatic relations with it which will happen sooner than later. Bangla Desh’s relations with India depend on which Begham is in power but irrespective of the regime, Bangla Desh can be expected to do the Chinese bidding. Chinese support to the Military junta in Myanamar is an open secret. They are grateful to China who is not treating them as untouchables like India. Apart from giving them the permission to establish a naval base of Coco Islands in North Andamans, talks of Stillwell Highway being resurrected are doing the rounds. So Mynamar is firmly in the Chinese camp.

Now the string of pearls strategy. Pakistan has already accorded berthing and refuelling facilities to Chinese navy at Gwader and Karachi. Chinese are now pressurizing Maldivas and Sri Lanka to do likewise. It should not come as a surprise to anyone if that happens. China helped Sri Lanka during its war against LTTE while we squirmed due to the pressure from DMK and other South Indian political parties. Maldives apparently has forgotten that we saved the govt of President Gayoom in 1987 from Muslim predators. It may well grant refueling rights to Chinese navy.

In view of the focused and well thought out strategy of the Chinese if we think we are going to give the Chinese a run for their money in Asia, we need to refocus on the region instead of cosying upto the super power who is treating us with barely concealed ‘ contempt. Pakistan’s proxy war needs a strong response including punitive air strikes to take out the known terrorist camps in POK. Chinese intrusions must not be treated with the famous oriental calm. We must ask China to vacate our area in Aksai Chin – something we have never done so far. Concurrently infrastructural development in border areas must be taken up in right earnest. Nepal needs to be firmly told to be sensitive to Indian interest and not play footie with Pak lSI and Chinese failing which a blockade can bring her to her senses. Indo-Bhutan Treaty needs to be renegotiated and Bhutan must be given all help including military to counter the Chinese aggression.

Bangladesh must be firmly brought in line. Fencing must be completed and even cross border raids can be launched to destroy camps of ULFA and other militant groups on its soil. Mynamar junta must not be treated as untouchables. You have to do business with whoever is in power.

Relations with Sri Lanka and Maldives need to be energized. In short stop taking our neighbours for granted. This has been the greatest failure of India’s foreign policy in six decades and has allowed China to keep us unbalanced, unhinged and confined to South Asia.