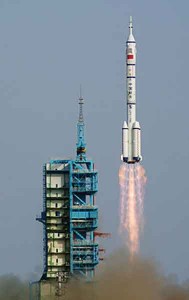 China has already sent eight astronauts into space on four manned missions. Budgetary constraints and technology denial regimes have been cited as the primary causes of tardy progress in India. While this may be so, with the nation afflicted by slow and diffused decision making process, bureaucratic lethargy and an uninspiring political system, India may not be in a position to compete with China where decision making is swift, aggressive and centralised. As a result, China has already established a clear lead over India in the economic, military and technological domains. Awareness of the ground realities was evident in a statement by Dr K Radhakrishnan, Chairman ISRO that, “India was not locked in a space race with China.” Indeed, a race between a hare and a tortoise is possible only in the realm of fables.

End June this year, China stonished the world with another success in the series of ventures into her space endeavour by way of the 13-day mission of the Shenzhou-9 capsule. The mission was executed flawlessly, flagging a landmark which was a major and a critical step forward in the country’s ambitious space program. Having mastered the technology of manned space flight several years after the US and the Soviet Union, in September last year, China moved forward to the next step in human space exploration with the launch of its unmanned space module, the Tiangong 1. This is an experimental space laboratory and a prototype for a future permanently manned Chinese space station to be established by 2020. The Tiangong 1 will be the platform for the mastering of technologies related to rendezvous and docking as also build-up experience for the construction, management and operation of a space station.

The mission in June 2012 included remotely controlled as well as piloted docking of the Shenzhou 9 capsule with the orbiting Tiangong 1 module. One of the important objectives of the mission was extensive medical monitoring of the astronauts as part of preparations for manning of a permanent space station. A unique feature of the mission was that it had onboard the first Chinese female astronaut, the 33-year old Liu Yang, an experienced pilot in the People’s Liberation Army Air Force (PLAAF). Also onboard were the 45-year old veteran astronaut Jing Haipeng, who was in command of the mission and newcomer Liu Wang, 43. Both these men are also pilots in the PLAAF with high levels of experience. The completely charred Shenzhou 9 capsule parachuted to a landing on the grasslands of the country’s sprawling Inner Mongolia region on Friday, June 29, 2012 at about 0200 hours GMT.

With the success of the Shenzhou 9 mission, China has leap-frogged in the global space race. In the first half of 2012, China has successfully conducted ten of the 35 launches in the world, racing ahead of both the US and Russia with the former having conducted eight and the latter, nine.

Although the development of rocket technology was pioneered in the ancient times by the Chinese, the first real attempt by China at foray into modern technology for space exploration was made by Tsien Hsue-Shen. He was born in China in 1911 and had gone over to the US in 1935 for higher studies on a Boxer Rebellion Scholarship. On his return to China in 1955, he initiated the development of China’s space industry a year later. In the initial stages, China’s efforts at the development of space technology were hampered by primitive industrial infrastructure and low levels of scientific and technological expertise. In fact, the Chinese aeronautical industry did not possess the capability to build even a supersonic combat aircraft let alone a spacecraft. However, through relentless efforts, after five and half decades of struggle and with some assistance from the erstwhile Soviet Union, China today ranks among the most advanced countries in the world in the regime of space technology. 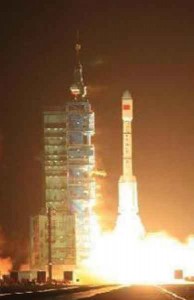 Having developed an unmanned spacecraft, indigenous cryogenic engine technology and the family of Long March rockets capable of inserting payloads of up to 9,200 kg in orbit, China entered the international commercial launch market in 1985. By the year 2000, China had launched 27 satellites for the international market. On parallel track, by the year 2000, China had launched 47 satellites of various types to meet with the requirements of the domestic segment. The success rate achieved in these was of over 90 per cent. It may appear somewhat incongruous but it is understood that the Chinese space effort did receive some assistance in respect of improvement of design following a series of launch failures prior to 1996. US support was, however, withdrawn subsequent to embargo on transfer of technology and other political considerations unfavourable to China.

By this time, China had established three launch sites appropriately situated for achieving different desired orbits for their satellites. These were – Jiuquan for mid-inclination orbit, Xichang for geo-synchronous orbit and Taiyuan for polar orbit. The four categories of satellites developed by China were Fanhui Shei Weixing, Recoverable Test Satellites used initially for military reconnaissance, Shijian (SJ) scientific research and Technological Experiment Satellites to obtain data on the space environment, Dong-fang-hong (DFH) satellites employed for telecommunications, Feng-yun (FY) meteorological satellites for tracking of weather with FY1 series operating in low-earth sun-synchronous orbit and the FY2 operating in geo-synchronous orbit. Incidentally, China was the third nation in the world to develop satellite recovery capability.

With the success of the Shenzhou 9 mission, China has leap-frogged in the global space race.

The China National Space Administration (CNSA) was established by the government at the turn of the century for the management of the Chinese space programme for civilian use as well as for international cooperation. CNSA had a wide ranging mandate with objectives spelt out for a 20-year timeframe which included the development of an integrated space infrastructure, marketing of space technology and applications, international cooperation for advanced technology from the West and to assist developing countries in the regime of space technology. However, the central focus for CNSA was to steer the national efforts for China to become a world leader in the field of space science and exploration of outer space.

In response to the initiatives by the US, the then Soviet Union and Europe in space exploration and military related space activities such as the Star Wars programmes, in July 1985, China conceived and initiated its own manned space flight programme. However, the project actually commenced in 1992 and was designated as Project 921-1 with a mandate to launch the first manned mission into space in October 1999. China was clearly determined not to be left behind in the space race or in any way slowdown her drive to emerge as a world power. The scientific community in China was of the firm view that merely sending astronauts into space to orbit the Earth was not enough and that the establishment of a manned space station ought to be one of the national goals for the nation. They believed that this would help China develop all aspects of space technology in a comprehensive manner including advanced launch vehicle capabilities.

The plans for space exploration in China were executed with utmost secrecy and its details remained largely unknown to the outside world. Also, China declined invitation by the US for participating in the Space Shuttle and International Space Station programmes. However, in the period 1983 to 1988, China signed a number of treaties on space under the auspices of the United Nations and began participating in international conferences.

China today ranks among the most advanced countries in the world in the regime of space technology.

After years of careful planning and testing as also a series of unmanned space flights in the preceding four years, China’s first manned spacecraft, the Shenzhou 5 (Divine Craft), finally blasted off from the Jiuquan Satellite Launch Centre in the North Western province of Gansu on October 15, 2003, four years behind the originally planned schedule. The Shenzhou 5 spacecraft atop a Long March II F rocket was piloted by Yang Liwei, 38, a Lieutenant Colonel of the People’s Liberation Army (PLA) and a member of the PLA’s Astronauts Team trained inhouse. The Shenzhou 5 spacecraft orbited the Earth 14 times before landing safely in North China the following day. The successful launch and recovery of the spacecraft made China the third country after Russia and the US to send a human being into space. In 2008, a Chinese astronaut completed the nation’s first space walk.

As stated earlier, to date, China has launched a total of four manned space missions since 2003 as against the total number of 118 manned space flights by Russia and 170 by the US. Eight Chinese nationals have been into space on manned flights undertaken by China since 2003.

While China’s space programme was projected all along as having a civilian character, the technologies employed and the capabilities developed could easily be adapted for military use, a practice not unusual amongst all spacefaring nations. However, on a dedicated military front, in September 2006, China is reported to have secretly fired a powerful laser weapon from the ground designed to disable American spy satellites by ‘blinding’ their sensitive surveillance devices when transiting over China’s territory. This was not publicly acknowledged by the US government under compulsions of international diplomacy. At that point in time the greater concern of the US was that its attempts to co-opt China in diplomatic offensives against North Korea and Iran did not run aground.

Again on January 11, 2007, the Chinese military successfully carried out its first hard-kill test of an anti-satellite weapon. In this experiment, a ground-based medium range ballistic missile was fired to physically destroy one of its own ageing weather satellites orbiting in space 537 miles above the surface of the Earth. Though seemingly inconsistent with her stand against the weaponisation of space, the anti-satellite weapon experiments demonstrated China’s ability to target spy satellites not only of the US but of other nations hostile to China which could include India as well. With this demonstration, China clearly displayed her resolve to play a major and a dominant role in the global military space regime as well.