Change of guard on subcontinent 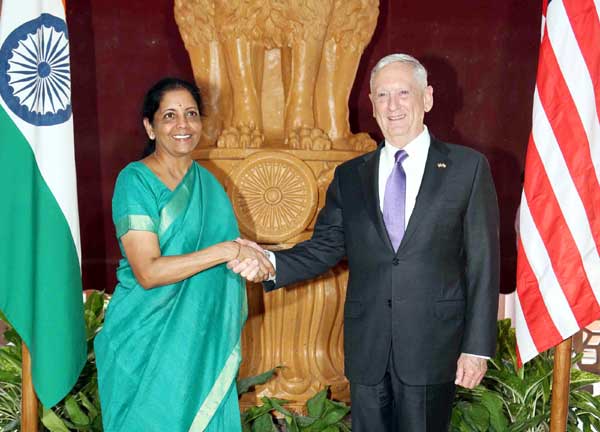 US Defence Secretary James Mattis recently met with his Indian counterpart, Nirmala Sitharaman in New Delhi. Two subjects took precedence over a variety of items on their agenda for talks. These were (a) meeting the challenge of global terror and (b) strategic defence partnership.

Roadmap for this Indo-US interaction was laid when Prime Minister Modi met with President Trump in the White House on June 7 last. Mattis is the first cabinet minister in Trump administration to visit India.

Obama administration was neither clear nor decisive on US’ role in meeting the threat from jihadi terror. Trump is clear and forthright on the subject, and hence disliked by elements sympathetic to Theo-fascism.

In G-20 meet in Turkey PM Modi had called upon the world community to join the dialogue of countering global jihadi terror. There were no takers. Western powers as well as China gave precedence to national interests over the interests of world community. India, facing externally sponsored terrorism since two decades and half in the past, could visualize the far-reaching consequences of terrorism if not checked and resisted now.

Trump seems to have realized that jihadi terror is not a threat only to the individual states but to the hard earned democratic dispensation and governance for which the Western world had fought two world wars ad made enormous sacrifices in terms of men and material. More than two centuries and a half ago, Americans, too, had fought a civil war for preservation of democracy and freedom.

We appreciate that realization has dawned upon Trump administration and it is seeking the hand of like-minded friends and partners in meeting the challenge. In the process the US has rightly placed her finger on the map of India as the bastion of democracy and freedom in the East.

Honest Indian historians and analysts will have to dispassionately evaluate whether letting the recently independent India slip into the vortex of two conflicting ideological blocs into which the world was divided during cold war era, really served the interests of our nation. After tacitly honeymooning with the Communist bloc and then initiating the idealistic non-aligned ideology we only helped the western bloc become more skeptical about our intended policy.

The rise of jihadism owes its origin not necessarily to the rise of Iranian patriarch Ayatollah Khumeini or the Wahhabism of Abdul Wahhab of Saudi Arabia. Its roots are embedded deep in cold war strategies with the erstwhile Soviet Union committing the suicidal blunder of invading Afghanistan and the US countering it with evenly keeled suicidal blunder of raising, arming and indoctrinating jihadi legions in Afghanistan. In the words of Pakistan foreign minister spoken at Asia Centre in New York recently Pakistan cannot be blamed for allowing the jihadi terrorist organizations sprout on her soil because there was a time when terrorist outfits like Taliban, Haqqani, LeT and others in Afghanistan and Pakistan were the “darlings” of the Americans and they “wined and dined with them in the White House.”

This is called serving the national interests, and hence the irrefutable truth in the axiom that in diplomacy there are no permanent friends or foes, there are only interests.

Now that the Frankenstein created by the Americans has begun to boomerang on them, they are in search of new allies and new forces that would lend direct or indirect support to their national interests.

There is even dichotomy in that as well. In what way can one define the ‘national interests’ of the US? Washington is pouring the entire wrath on Islamabad for providing safe haven to the Haqqani and Al-Qaeda outfits and at the same time it has continued huge financial assistance to Pakistani army for the dubious fight against the TTP in KPK.

Conversely, James Mattis wants the hand of India in fighting the demon that has spread it dark and dismal fangs over the ideology of democracy which is the strongest in the US and the largest in India. Clearly, the US is on the horns of dilemma. It has to be either on the side of democracy or shifting ‘national interests’.

India has, from the very beginning, looked at the rise of jihadism as a serious challenge to democracy meaning true freedom and emancipation of mankind.  Later events have vindicated India’s stand. With this realization dawning upon the Americans even if belatedly, is reverberation of India’s note of caution. Hence there is logic in two defence ministers converging on the imperative of forging common strategy of meeting the menace. India would be glad to walk two steps if the US or any other democratic country agrees to walk the talk. By designating some Pakistan-based jihadi organizations and their leaders the US does not put India under any obligation; Washington has done so by way of atonement of its suicidal blunders.

As regards the second part of the talks between the two defence ministers, viz. strategic and defence partnership, India has chalked her policy towards her two hostile neighbors that are now on the tango. What has prompted US lately to focus on Indo-US strategic partnership is the fast growing political, economic and strategic aspirations of China in which she has found a manageable client state in Pakistan. Asia-Pacific security is Washington’s prime concern; so is it of India. This has found reflection in a statement coming from the Pentagon which says, “The United States views India as a valued and influential partner, with broad mutual interests extending well beyond South Asia,”

Actually, Mr. Mattis’ predecessor Ashton Carter had pushed hard for stronger defence ties with India. With Sino-Pak camaraderie in sight, US are like to persuade India to buy Lockheed Martin’s F-16 Block 70 aircraft in a deal potentially worth $15bn. The US manufacturer is competing with Swedish defence giant Saab, whose Gripen E made its maiden flight in June. Both Companies have offered meeting India’s initiative to cut imports and build a domestic defence industry. We need at least 100 single-engine fighters to counter what it says the growing air threat posed by China and Pakistan.

US giant Boeing has also offered to set up a plant in India for production of its F/A 18 Super Hornet aircraft if it wins a deal. In addition a drone deal for the Indian Navy will also figure in India’s purchase list,

In the context of defence equipment deals, the significant thing to note is that the reshuffle in the Union Cabinet that brought Nirmala Sitharaman to head the Defence Ministry was done before the visit of the US Defence Minister. Immediately after sworn in as new Defence Minister Mrs. Sitharaman took a couple of crucial administrative decisions obviously in anticipation of Indo-US defence cooperation prospect that was to unfold thereafter.

In one of her meetings with the defence top brass preceding Indo-US Defence Ministers talks, Mrs. Sitharaman decided that the Defence Acquisition Council, the highest decision making body on defence procurement, would meet on a fortnightly basis to ensure a time-bound clearance of proposals on military acquisition. Sitharaman would also have a separate meeting with the defence secretary every day, the ministry said in a statement.

This resume of new initiatives of Indo-US cooperation in two crucial areas of containing jihadi terror and in protecting the political ideology of democracy against the unprecedented phenomenon of radicalism should give an idea of parameters along which the two defence ministers have met and talked about. Maybe Kashmir separatists are able to decipher the signal from Washington.