Capacity, Autonomy and Venality: The Larger Challenges of Governance

Mr. Suba Rao, previously RBI Governor, has stirred a hornet’s nest by calling the IAS’ elitist, self-serving, perpetuating a set of bureaucrats who are out of touch with reality and wallow in their privileges and social status and have lost their courage of conviction to stand up for what is right’. As if this is not enough, he believes that the numbers who are corrupt is no longer miniscule. He also does not believe that the politicians can be faulted for the intellectual and moral decline of the IAS. “No political system, no matter how venal, can corrupt bureaucracy”. While all this is common knowledge, what stands out is his call to bureaucracy to be ‘meritocracy’, as ‘there is general complacency that everyone will get promoted by efflux of time, the corrupt and incompetent will not be weeded out, and there is no pressure to perform and deliver results’.

This is surprising as the six principles of Weberian concept of bureaucracy rested on specialization, formalized rules, hierarchical stream, well trained employees and impartial management. While the German sociologist admired the rational legal model of bureaucracy, underpinned by rules, he also underlined its potential for red tape, and restricting employees to come up with innovation.  Robert Merton went one step further and highlighted inefficiencies of bureaucracy and observed that instead of serving as means to an end,‘ rules become ends in and of themselves.’ This has the potential to cause dysfunctions, harming the institutions.

Samuel Huntington, who wrote the controversial book ‘Clash of Civilization’ observes that highly institutional political systems have bureaucracies with high degree of autonomy. His student, Francis Fukuyama, who wrote the iconic book “End of History” (1992) after the fall of the Berlin wall and disintegration of USSR to highlight how liberal democracy has ended all ideological in paper titled ‘What is Governance’ (2013) writes that ‘the quality of governance is a function of interaction of capacity and autonomy.’  In the figure (given below) Fukuyama brings out the relationship between the two variables and has identified how different countries have mixed up capacity and autonomy. Countries like Germany and Singapore show very high levels of bureaucratic capability and high degree of autonomy as well. India, however, Fukuyama notes that ‘is famous both for high level of corruption and clientelism and simultaneously having excessive rules and bureaucratic red tape.’ He believes that India clearly needs much greater state capacity across the board. 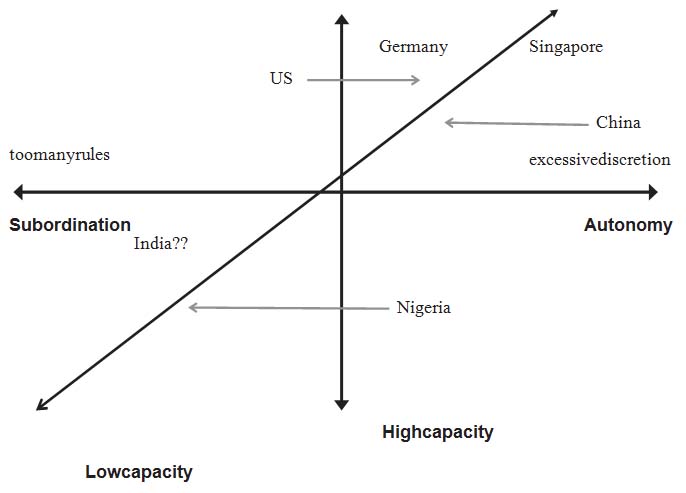 Be that as it may, the central concern is lack of adequate capacity and professional heft amongst the civil services, be it the IAS, IPS, Revenue Services and the Audit services. When India became independent Nehru relied largely on the technocrats for steering major programs like atomic energy (Bhaba), Space (Sarabhai).  PC Mahalnobis was picked up for planning India’s rapid industrialization The Second plan (1956-61) was the cocktail of good statistics and potent politics. The slew of IITs and IIMs which were set up fostered this process of technocratic excellence and global connect. Bhabha headed the International Atomic Energy Commission in Vienna, PC Mahalnobis’s name was proposed by US and seconded by USSR to head the World Statistical Organization and Sarabhai had a chair in Soviet Space program. This was the high noon of India’s position in the field of science and statistics. Some of the institution builders for India later on have been MS Swaminathan in ushering Green Revolution and making India self-sufficient in food, Kurien flooding India with milk with White Revolution and Dr Kalam who has made India, a real missile power to contend with. Nehru had once sardonically observed: One technocrat is as good as four bureaucrats. Being a student of science, he loved numbers, heavy industry and technology.He inked India’s foreign policy and gave autonomy to institution builders.

This was not the case with his successors. Shastri depended heavily on LK Jha, a bureaucrat and Mrs Indira Gandhi on PN Hasker, before Sanjay Gandhi, emergency and hubris overtook her and Bajpayee on Brajesh Mishra. Most distressingly Mrs G wanted a committed bureaucracy ‘wedded to powers that be rather than rule of law’. The excesses committed during emergency have been documented by the Saha Commission. It said: ‘Even the cream of the talent in the country in the administrative field often collapses at the slightest pressure. The overall picture is that the civil servants felt that they had to show loyalty to the party in power in order to advance their careers.’ This was not only true of civil servants but also of supreme court judges during the emergency. When SP Shukla was illegally detained and his wife prayed for habeas corpus, four judges agreed with the government that the right to life does not exist during emergency. The lone dissenting voice was of Justice HR Khanna, who was superseded to the post of CJI. The famous jurist Granville Austin wrote: All the judges hung together, lest they will be hung. Mr Subba Rao has alluded to the self-serving nature of bureaucracy. As shown above, it can overpower judiciary also though it is constitutionally protected to act independently and act as a check and balance in our democratic polity.

The other area that needs to be paid serious attention to is the need for greater professionalization of the civil services. The Administrative Reforms Commission had observed that there is need for every IAS officer to specialize in one area of expertise after 12 years of service. While the civil services attract some of the best talents after a real grueling competitive examination and are exposed to a wide array of training programs, most of them they do not do specialization, say a PhD, from a reputed university.  While privatization is the toast of the town we are gradually gravitating to collaborative model of governance where   industry, local communities and government are partners. In the complicated areas of contract finalization and administration, global financial systems and social sector delivery, there is a need to up the professional antennae. The Mandalization of the Civil Services with 26% reservation has also affected the quality of intake. The tendency of present government to bring back the specter of committed bureaucracy is also affecting efficiency and impartiality, two vital components of Weberian bureaucratic construct.

There is, however, a welcome change PM has brought in is by bringing professionals from outside to join the government at the level of Joint Secretary and above in important ministries like Ministry of Finance, Infrastructure and Social Sector Ministries. They bring in innovative ideas, uncluttered by bureaucratic fossilization. This is proving to be a good experiment. In the early 1980’s , Dr Manhohan Singh brought in excellent technocrats like Dr Montek Singh Ahulwalia , who inked the architecture of economic liberalization in India in the 1990’s. Dr Nandan Nilakeni as Chairman UDAI in 2009 also ensured that the Aadhar initiative is undertaken by officers from the civil services and IT experts from outside. In the newly created set up in MoD under the Chief of Defense Staff, there is an increasing realization that the requisite military advise and expertise is getting duly factored in before taking important decisions. The earlier grouse that the civilians without requisite expertise were hijacking or derailing decision making has now been substantially assuaged.  Fukuyama had observed that the impact of variables like autonomy and capacity on governance are extremely onerous to be assessed. However, there can be no debate that meritocracy rather than governance by generalist has to be policy option for any functioning democracy. The development model of the future, Jeffrey Sachs writes in his book ‘Ages of Globalization’ will have to more collaborative, with industry, local community, NGOs and government as partners rather than government led and pilloried for their inefficiency.Professional excellence is the over arching need of all services and not limited to the IAS. Capacity has to run hand in hand with autonomy and accountability in a liberal democracy like India. Mr Rao has made the right noises but should have fleshed the larger challenges with greater dexterity and finesse.