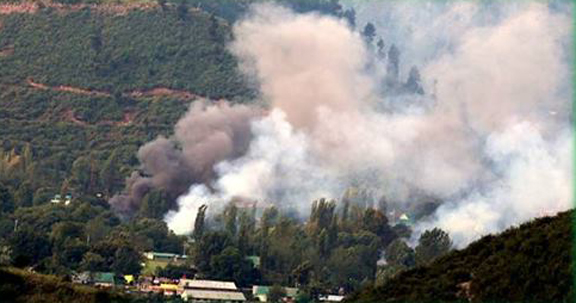 Consider the following statement made by Pakistan’s Defense Minister Asif Mohammad Kwaja in an interview to Pakistan Urdu news TV channel on 26 September;

“Tactical weapons, our programmes that we have developed, they have been developed for our protection. We haven’t kept the devises that we have as showpieces. But if our safety is threatened, we will annihilate them (India).”

The threat of use of nuclear weapons by Jihadis has been another concern for international community.

He had made a similar statement to Geo TV on 17 September a day before the attack on Indian Brigade Headquarter at Uri in Jammu and Kashmir.

The above statements were sufficient to ring alarm bells to the international community who seem convinced of Pakistan’s appetite to create mischief and thereafter act in an irresponsible manner through use of tactical nuclear weapons should it be threatened through conventional means.

The threat of use of nuclear weapons by Jihadis has been another concern for international community. In a fund raising event organized by Ms Hillary Clinton earlier in the year, she stated “Pakistan is running full speed to develop tactical nukes in their continuing hostility with India.  But we live in fear that they’re going to have a coup, that jihadists are going to take over the government, they’re going to get access to nuclear weapons, and you’ll have suicide nuclear bombers. So, this could not be a more threatening scenario.”

US State department took note of Pakistan Defence Minister and responded by stating “Nuclear capable states have the responsibility to exercise restraint regarding nuclear weapons and missile capabilities.”

The Indian action was as much a message to Pakistan, its deep state combines of ISI and Army that Indian threshold had been breached and it will not hesitate to take strong action…

Unfortunately, Pakistan’s strategic community, retired armed forces officers, diplomats and academics have been consistently articulating the viewpoint that Pakistan has a low nuclear threshold, which it will not hesitate to employ should it be threatened by a superior conventional adversary on its soil. So in essence Pakistan’s Defence Minister was espousing similar viewpoint when he made above mentioned statement.

The first use policy for tactical nuclear weapons has been primarily aimed against India and meant to thwart its superior conventional capability and response strategy against terrorist strikes.

When seen from a global scenario the irresponsible statement given by Pakistan Defence Minister and stated policy on use of Tactical Nuclear Weapons, the dangers of a nuclear conflict actually become real.

Pakistan’s use of state sponsored terrorist proxies to attack Indian interests; Indian parliament, Mumbai attacks, targeting families of Indian soldiers at Kalu Chak, Pathankot air base and lately the audacious attack at Uri, coupled with persistent support to proxy war in Kashmir have nudged India no end.  The threat of use of nuclear weapons should India retaliate to a terror strike had in a certain measure prevailed upon India to desist from initiating any bold action.

In other words, India had been blackmailed into accepting Pakistan’s threat of use of Tactical Nuclear Weapons in event of a major action by Indian security forces on Pakistan’s territory.

The sham of Pakistan was finally called on 29 September 2016 when India retaliated in a limited manner and carried out surgical strikes against terrorist launch pads in Pakistan Occupied Kashmir. The Indian action was as much a message to Pakistan, its deep state combines of ISI and Army that Indian threshold had been breached and it will not hesitate to take strong action should Pakistan continue the use of terrorists to destabilize India.

Probably in the event of a conventional proactive retaliatory strategy, leading to India making major territorial gains, the threat of use of Tactical Nuclear Weapons by Pakistan on its own soil may still be relevant. According to Gurmit Kanwal “there is space for limiting war below the nuclear threshold. Though Indian military retaliation to a major terrorist strike would be carefully calibrated to avoid threatening Pakistan’s nuclear red lines, under certain circumstances the exchange could escalate into a war in the plains.”

How India develops a strategy to tackle the threat of nuclear blackmail by Pakistan in conventional scenario would remain a major challenge, but for the time being India, in response to Uri terrorist attack, has successfully managed to give a befitting reply to Pakistan in spite threats of nuclear retaliation.