Beyond Defence Deals: The Alchemy of Elections

There is a consensus that the NDA government (2014-2019) has followed broadly the same path of economic liberalisation as the UPA government during (2004-2014). To be fair to the NDA, they have not whittled down the scope of employment generating programs like MNREGA, which has been the biggest social sector initiative to provide employment to about 31 million households a year. India’s poverty ratio, which was around 40% in 2000 has now come down to around 20%.

While in terms of absolute numbers, 280 million living in abject poverty is a dismal picture, the consistent high growth rate of around 7% since 2000 and continuation of inclusive schemes like MDM, ICDS and MNREGA have made India less poor and a more inclusive society. Under Mr. Modi’s watch, four very significant initiatives have been taken viz. the IBC (Insolvency and Bankruptcy Code) for bringing down humungous non-performing assets in an effective way, provide easy credit to the small scale sector through the Mudra initiative, provide gas cylinders to BPL women under Ujjwala scheme and improving the infrastructure footprint, particularly of roads and national highways. 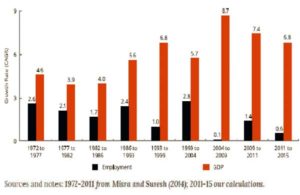 Both UPA and NDA governments have been equally guilty of this, largely due to a stagnant industrial sector which is traditionally the spring board for employment generation and current account surplus as in countries like Germany, USA, Japan, Korea and China through their global manufacturing hubs. The grandiose plan of generating 10-12 million per year through National Manufacturing Zones has remained a pipedream.

The following table brings out the sectoral contribution of primary, secondary and tertiary sector of India since 2000 in terms of employment and contribution to GDP and disturbing picture of unemployment of the youth and percentage of the employment.

It would be seen from the above that there is a mismatch between employment and contribution to GDP in the agricultural sector, which is characterised by disguised employment (Nurkse) and low farm productivity. The manufacturing sector has been largely stagnant and the service sector does not generate adequate employment, as is the case in developed countries.

In a perceptive analysis, Prof. Dani Rodrik and Prof. Arvind Subramanian have brought out how China has fared better than India because of its emphasis on manufacturing, economy of scale, high productivity of workers and global demand for its labour intensive low skill products. The authors are not sanguine that India would be able to compete with other developing economies to increase its global share of exports significantly.

A major highlight of the above table is the growing trend of unemployment of youth and high vulnerability to unemployment in the informal sector where the youth and women are engaged. Post demonetization, they were most affected by unemployment and acute hardship. The Economist had, therefore, pithily summed up India’s predicament; as one of ‘formalizing its informal sector’.

There is yet another dimension that the World Bank Report has brought out viz. huge inequality of income and wealth in many developed and developing economies like India. The Gini coefficient of income in India is around 0.5, which is way ahead of many developed countries. While Gini coefficient for wealth is not available for India, it is assessed that the top 1% accounts 50% of India’s wealth and top 10%, 70%. The Gini coefficient of wealth in France is as high as 0.7% and 0.8% in USA, that triggered Thomas Piketty to write his seminal tome “Capital in the Twenty-First Century”.

One of the serious fall outs of such high inequality of income and wealth is that those who need to consume do not have the purchasing power. This seriously impacts aggregate demand, leading to economic stagnation and sluggish incentive for private sector to invest; a typical Keynesian problem. Add to this is the very low increase in real wage of the workers; who are particularly in informal employment, depresses private consumption.

The World Bank report also brings out how the high vulnerability to unemployment of the youth is leading to serious ‘substance abuse’ issues and mental problem in India. There is a criticism that the Modi government is promoting crony capitalism. Sri Ruchir Sharma has worked out a Crony Capitalism index where India stands at 9th position amongst 29 countries; with countries like Hon Kong, Russia leading the list. The sectors where the state typically shows undue favours as per this index are casinos, coal, oil, infrastructure and defence. Prof. Jinglin in a perceptive study of China observes, that crony capitalism operates through state patronization. In contrast a market economy operates under ‘rule of law’ through transparent bidding and evaluation process. The charge of the opposition party of ‘crony capitalism’ in the Rafale defence deal is a subset of this criticism. However, such cosy relationship between corporates and governments is not the monopoly of any party in power, or of India.

Most governments tend to business friendly, instead of fostering a good business environment. However the youth is not overly bothered about such debates. They are looking for an environment, where they will have a credible opportunity to get jobs. In such a situation, they seems to believe that the trickledown effect of business friendly government, which Mr. Modi to promote, will be to their advantage.

As Acemoğlu writes in his book ‘Why Nations Fail’, “The youth want progress. They do not look at each other as Muslims or Christians”. The outcome of India’s election will rest on this promise of progress not on the perception of crony capitalism in Rafale deal!