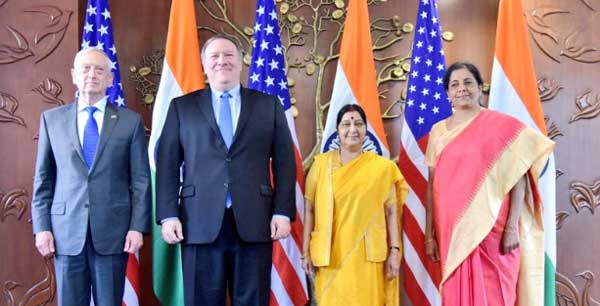 USA’s strategic and business interests in Indo-Pacific region puts India under its cross hairs as priority one. To counter China and its growing menace in the region, India fits into the overall scheme of this Great Game, perfectly well. But, India needs to be tamed and this has been a major challenge for the Americans in past decade. India’s strategic interests have to be aligned with those of the US.

As it is said that in the real world, there exists no permanent friends or foes, only the national interest is permanent. Under the changed geo-political dynamics, America seems to be abandoning its long-time ally Pakistan as of now.

Not going too far back into history, it will be in contest to recall the geopolitical environment prevailing in 70s till the end of 90s.For all good reasons, India has always exercised strategic independence. And for this very reason, we have braved through the toughest crisis arising out of 1971 war and the Pokhran nuclear tests of 1998.

During the war for Bangladesh’s independence, US had moved its 7th fleet in Bay of Bengal threatening India, but we stood our ground and crushed the American ally, Pakistan. Similarly after the 1998 nuclear tests, India was put under tough US led sanctions and we rendered them all redundant.

As it is said that in the real world, there exists no permanent friends or foes, only the national interest is permanent. Under the changed geo-political dynamics, America seems to be abandoning its long-time ally Pakistan as of now.

The US Secretary of State, Mike Pompeo on his way to New Delhi for the 2+2 dialouge, arrived in Pakistan on Sep 04. A time when relations between the two countries have sunk to a new low. The United States had recently cancelled a $300 million Coalition Support Fund payment to Pakistan. And Mike Pompeo just before stepping the Pakistani soil, announced the appointment of an unpopular figure in Pakistan, Zalmay Khalilzad, as the new U.S. special adviser for Afghanistan Reconciliation.

Thereafter, at New Delhi on Sep 06, Mike Pompeo and Sushma Swaraj held the 2+2 dialogue. India’s leading English daily, the Indian Express reported on the significance of the dialogue, “Almost two years after the Uri attack that was mounted from Pakistan-occupied Kashmir and the retaliatory surgical strikes against terrorist pads in PoK, the US signed off on using New Delhi’s language and used “territory under Pakistan’s control”, and not Pakistan’s “territory” — to describe Pakistan-occupied Kashmir. They also slammed the use of “terrorist proxies”, a description for extremist political groups used by Pakistan’s army in the region.The Indian side also used the term “retribution” for the first time when it came to justice for those behind the Mumbai terror attack in 2008. But, the US stuck to the standard formulation of “to expeditiously bring the perpetrators to justice”, and did not mention retribution — a key theme for the Indian side after the 2016 surgical strikes.Sources said that this “diplomatic formulation” in the joint statement Thursday — agreed at the first-ever Indo-US 2+2 bilateral dialogue — is “new” and “significant”.“This shows their acknowledgement that PoK is not Pakistan’s territory and it’s under its control. A lot of negotiations went in to get this language change in the joint statement.”

With this agreement in force, India now will be able to procure specialised encrypted communications equipment for US origin military platforms like the C-17, C-130 and P-8Is.

On the same day, India and the US signed the second foundational or enabling agreement, Communications Compatibility and Security Agreement (COMCASA) on the side-lines of the inaugural 2+2 dialogue.

COMCASA is one of the foundational agreements that the US signs with allies to facilitate inter-operability between militaries and sale of high end technology. As per the officials, this agreement is an India-specific version of the Communication and Information on Security Memorandum of Agreement (CISMOA). It will be valid for a period 10 years.

With this agreement in force, India now will be able to procure specialised encrypted communications equipment for US origin military platforms like the C-17, C-130 and P-8Is. Currently, these platforms use commercially available communication systems and are not as secure as the encrypted American systems.

As per the press brief, “specific additional provisions have been incorporated in the text to safeguard our security and national interests. This will enable greater communications interoperability between the militaries of India and the US. Data acquired through such systems cannot be disclosed or transferred to any person or entity without India’s consent.Both the countries will implement this agreement in a manner that is consistent with the national security interests of the other”.

The joint statement after the 2+2 dialogue and signing of this critical foundation agreement of COMCASA are indeed a paradigm shift in Indo-US relations. Across the board, all the leading media houses in India have hailed this COMCASA agreement as a positive development.

Economic Times says that “this pact will pave the way for fitting special communications systems on Indian platforms like the C130J and the Naval P8I aircraft that will enable them to interact with the US military. For example, a US ship that would have picked up a Chinese submarine movement near the Malacca Strait would be able to transfer information like its speed, location and direction to the Indian Navy in real time. Beyond that, in case India acquires armed drones from the US, the agreement will give the two nation the ability to share targeted information —say, a live satellite feed that is monitoring a terrorist leader’s convoy in a third nation.

Ambassador P Stobdan writes, “From the US perspective, these accords (LSA, COMCASA & BECA) were not only meant to ensure the protection of US military interests but also create a string of dependency for the client state….”

The Hindu reports, “as a consequence of CISMOA, India will get access to Combined Enterprise Regional Information Exchange System or CENTRIXS for short which is the secure communication system network of the US. Navy ships with CENTRIXS systems on board can communicate securely with the U.S. Navy when needed and can benefit from the wider situational picture of the region as they have a large number of ships and aircraft deployed.This will reduce the stress on our assets and allow us prioritise our deployments more efficiently.”

The Times of India said, “this tightening strategic clinch between India and US, with an eye firmly on an expansionist and aggressive China in the Asia Pacific region, is a marked departure from the stance adopted by the previous UPA regime. It had stonewalled all attempts by the US to push for the three so called “foundational agreements” during its 10 years tenure on the ground that it would compromise India’s “strategic autonomy”.

On the contrary, there have been words of caution as well. The Indian Express in its June 25, report highlighted India’s concerns. It reported, “New Delhi is believed to be concerned about intrusive American access to Indian military communication systems, and about the violation of Indian sovereignty due to visits by US inspectors to Indian bases to inspect the COMCASA-safeguarded equipment. There is also a fear that a lot of Russian-origin and indigenous Indian military platforms may not be compatible with COMCASA.

Interestingly Ambassador P Stobdan, who is a senior fellow with India’s leading think tank, IDSA, in his article, “Whither the Indo-US Defence Partnership” dated June 25, writes, “From the US perspective, these accords (LSA, COMCASA & BECA) were not only meant to ensure the protection of US military interests but also create a string of dependency for the client state. If we look at the cases of many client states like Pakistan that have a history of importing high-technology and cutting-edge weapons from the American supply chain, they have had to considerably compromise on an array of sovereign choices. Invariably, these nations get forced into accepting the American diktat in their foreign and defence policies. In other words, the client loses its sovereign authority to wield independent power over its own territory. For example, the intrusion of US Special Forces into Pakistani territory during Operation Neptune Spear in May 2011 and the series of targeted drone strikes against Al Qaeda and Taliban hideouts are instructive cases of violation of Pakistan’s sovereign airspace”.

However, the persistent concern that COMCASA under the overall Defence Technology and Trade Initiative (DTTI), would give access to the US Navy into India’s own secure defence communication network. And also, that the information shared with the US could well be accessed by Pakistan. The officials have thus far brushed aside these fears. As per them, specific measures have been incorporated in the agreement “to have full access to the relevant equipment and there will be no disruptions.”

It is important to understand the overall scope of this strategic understanding between India and the US. As we remember, all this process began in 2012 when Defence Technology and Trade Initiative (DTTI) was signed between India and the USA. The processes of forging a closer politico-military relationship was set in motion. DTTI was not a treaty or a law but a broad strategic understanding between the two, aimed at:

With the signing of COMCASA, India and the US have managed to define the exact contours of Major Defence Partner (MDP) status.

•  Transforming the bilateral defence relationship into a one, that is limited only by independent strategic decisions, rather than bureaucratic obstacles or inefficient procedures.

•  Strengthen India’s defence industrial base by moving away from the traditional “buyer-seller”, towards a dynamic and a more collaborative approach.

•  Explore new areas of technological collaboration from science and technology cooperation through co-development and co-production.

This was followed by the renewal of ‘Framework for India-US Defence Relationship’ in June 2015. Under this framework if India decided to taking the defence collaboration further, it would require her to sign the three ‘foundational accords’:

•  Logistics Support Agreement (LSA), is the first one which the US signs with her allies facilitating use of each other bases and ports for supporting each side’s military operations.

•  Basic Exchange and Cooperation Agreement (BECA) is the third agreement of the foundational accords. This allows the sharing of sensitive geospatial intelligence gathered from satellites and other space based platforms.

With the signing of COMCASA, India and the US have managed to define the exact contours of Major Defence Partner (MDP) status. A status bestowed by the US on India that was created solely for her. It is only when the history is written in the years ahead,  one cay say, if India had surrendered its strategic autonomy or regained its lost strategic space in the South Asian region, on the historical day of September 06, 2018.

8 thoughts on “Analysing the Communications Compatibility and Security Agreement”