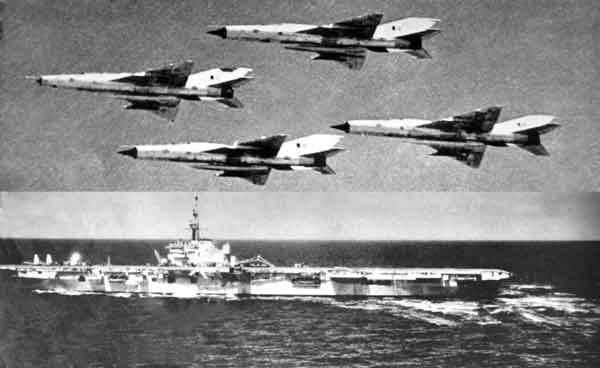 On 3 December 1971, No 26 Squadron, PAF initiated the pre-emptive strikes against Indian air bases with strikes at Srinagar, with a Time Over Target (TOT) of 1739 hrs. Each strike package consisted of four F-86Fs Saber fighter aircraft armed with 2×500-lb general purpose bombs and two escorts with guns only. Both missions were considered successful by the Pakistan Air Force (PAF) though they failed to cause any damage1.

… the Air Defence Artillery (ADA) presence at these targets had a large part in subverting the PAF designs of damaging IAF bases.

This was followed by the second set of strikes designed to neutralise Amritsar and Faridkot radars, so as to facilitate subsequent strike missions against Amritsar and Pathankot airfields. These strikes were by a pair of F-104s Starfighter aircraft each carried out a strafing attack on the two radars at 1740 hrs. PAF claimed to have hit the antenna of Faridkot radar.2

The PAF raids continued during the night with the B-57s Canberra raiding as deep as Agra and during the course of fourteen-day war, PAF launched a total of 288 counter-air sorties against Indian air bases and radar installations of which 81 sorties (28% of the effort) were considered to be unsuccessful by PAF itself as the armament could not be delivered.3 Even the 146 day sorties (including 35 escorts) flown against nine IAF airfields did not cause any serious damage to the runways and it was usually repaired within a few hours. The reason for failure was given by PAF was its inability to locate the targets, ammunition failure or interception by Indian Air Force (IAF) aircraft but a closer look at the details show that the Air Defence Artillery (ADA) presence at these targets had a large part in subverting the PAF designs of damaging IAF bases.

By its own admission, PAF lost only five aircraft during the 288 counter-air sorties i.e. an attrition rate of 1.7 percent which is not very high but interestingly four of the five losses were attributed to ADA by the PAF– one F-104 at Amritsar on 5 December and three B-57s on night 5/6 December.4 The losses admitted by PAF were understandably much less than the Indian claims but more of that a bit later.

Indian ADA shot down a PAF F-104 Starfighter on 4 December itself when Lance Naik Shreepati Singh claimed the Starfighter though PAF did not acknowledge this loss.5 The only loss of F-104 Starfighter (tail no 56-804) admitted by PAF was for its loss on 5 December when a Starfighter equipped with a locally developed radar homing device, which was the only one of its type in the PAF was shot down over Amritsar. After its failure to locate and destroy the Amritsar radar, including its efforts during the 1965 war, PAF had made great efforts in trying to pin point the radar location.6 The F-104 was able to locate the radar but PAF had apparently not factored in with the presence of ADA which brought down the Starfighter. The pilot managed to eject and was taken prisoner.

… notable achievement of ADA while defending the air bases was shooting down of three B-57s in a single night when they were shot down at Amritsar, Bhuj and Jamnagar…

PAF accounts claim that ‘the Amritsar radar busting project came to a halt at mid-day on 5 December’ with the shooting down of the F-104 but records indicate that strike against the radar continued all throughout the war with PAF making as many as twenty nine attacks over the next ten days.7 The radar ‘stopped functioning only once. Even on that one occasion, the disruption of power supply and damage to the equipment was rectified in about half an hour.’8 It was all due to the opposition put up by the ADA forcing PAF to admit that the sorties flown for ‘suppression of enemy air defences’ did not yield the desired results.9

Another notable achievement of ADA while defending the air bases was shooting down of three B-57s in a single night when they were shot down at Amritsar, Bhuj and Jamnagar during the course of the night of 5/6 December. These were the only B-57s lost by PAF during the war except the one RB-57 destroyed by the IAF on ground during a raid at Masroor.10

Pakistan did not admit to any other loss over Indian air bases though at least six PAF aircraft were shot down by the ADA during PAF air raids according to the official history of the war. A similar trend persists in the claim, and counter-claims during close support missions.

PAF accounts claim that interference by IAF was not prohibitive and the PAF was, by and large, able to perform its task. Even so, PAF accounts admit that almost 40 percent of the 296 sorties in Shakargarh sector were failures. It needs to be noted that mere delivery of the weapon load was considered as a successful sortie and did not necessarily mean that the target was hit or destroyed. This is important as PAF says that the ‘strike rate’ of ADA was poor and it lost only three aircraft during close support missions. The only plausible reason for the failure of the close support missions then that the ADA present did not let the PAF engage the targets.

… PAF lost more aircraft to ADA (15 aircraft) than to the IAF with the latter credited with 12 kills in the air.

The losses accepted by PAF, and the Indian claims, vary in case of losses during close support missions also as ‘The India-Pakistan War of 1971: A History’ credits Indian ADA with a total of six kills but PAF accounts mention only three losses- one each in Chhamb, Shakargarh and Marala sectors. Co-relating with the regimental claims is difficult as they are often not backed by any evidence and are thus difficult to be verified. The verification process is further complicated if there are conflicting claims as in the case of a F-6 claimed by a Gorkha battalion that was shot down by ADA on 7 December.12

Considering the figures given in the official history of the war for want of any other reliable source, one thing that stands out is that PAF lost more aircraft to ADA (15 aircraft) than to the IAF with the latter credited with 12 kills in the air. This was keeping with the trend of the losses during the 1965 war.13

The figure on 15 kills by ADA may seem low but the numbers need to be seen in the right context. PAF carried out far less counter-air missions than close support sorties but suffered the number of losses (six each). The main reason for low number of kills in the tactical battle area was the relatively lesser presence of the ADA in the tactical battle area (TBA). India had twenty six AD Regiments during the 1971 war of which twenty were deployed in the west, stretching from Kashmir to Bombay. Only six of these were with the field formations and the bulk of deployment was on strategic assets, air force bases and installations. This meant that there was inadequate ADA presence in the TBA to take on all the PAF aircraft.

Splitting of ADA Troops and the deployment in ones and twos by the formations further reduced the efficacy of ADA as these detachments hardly had any radar cover or early warning arrangements. With such constraints, it was creditable of ADA to have ensured air defence of own formations, and also shoot down PAF aircraft.

A comparison with Pak Anti-Aircraft Artillery and its performance will help put these figures in the right context. IAF lost a total of 71 aircraft during the war of which 52 were lost in the West. 40 of the 52 aircraft were lost in air, the majority (24 of the 52) to ground fire as only 16 IAF aircraft were shot down by PAF. If the losses in the East are also included, ground fire accounted for 34 aircraft i.e. almost 48 percent of the total IAF losses.14

Compared to India, Pakistan had fewer AA Regiments but fielded a larger number of AA Batteries during the war.

Pak AAA may have shot down more aircraft as compared to Indian ADA but two factors need to be considered. It had more AA Batteries than India in the tactical battle area and IAF flew far more sorties than PAF thus presenting greater number of targets to be engaged. In percentage terms, the Pak AAA did not perform as well as Indian ADA – 24 aircraft shot down by Pak AAA from 3,425 sorties (0.70 percent kill rate) as compared to 15 shot down by Indian ADA in 1,025 sorties (1.46 percent kill rate).

About the greater number of Pak AAA Batteries. Compared to India, Pakistan had fewer AA Regiments but fielded a larger number of AA Batteries during the war. As against the twenty-six AD Regiments with India (i.e. 78 AD Batteries) , Pakistan had four Heavy AA (HAA) and fourteen Light AA (LAA) Regiments translating into 68 AA Batteries (three Batteries in each HAA Regiment and four in each LAA Regiment). However, Pakistan fielded a total of 99 AA Batteries as per the ‘Report of the Hamoodur Rehman Commission of Inquiry Into the 1971 War’. These additional batteries were raised by Pakistan Army using Mujahids and reservists. They were not as effective as regular batteries were but they did provide a degree of deterrence and resulted in some degree of air defence to installations that would have otherwise been without any AD cover.16

The allocation of its AA Batteries by Pakistan Army followed a different pattern as compared to India. The Field Army given the priority over all other assets and  was allocated 59 AA Batteries against a requirement of 64 LAA Batteries. The remaining thirty-four LAA Batteries were distributed between PAF bases & installations, strategic assets like the railway network, Naval docks and Dams. All the available HAA Batteries were allotted to PAF, Navy and Karachi area. The emphasis was thus on defending the field army as compared to other assets and installations. Also, the allocation to the field formations in the TBA was that of regular AA batteries.17

A major reason for greater losses ( in numbers) suffered by IAF in the TBA was due to the larger presence of Pak AAA with its field formations but if the performance is compared, the larger number of Pak AAA Batteries were less effective as they shot down only 17 aircraft over the tactical battle area. As the PAF was grounded within 72 hours and remained absent from the skies in the East, no worthwhile comparison can be carried out about the relative performance of the ADAs in the Eastern Sector though it is worth noting that even in absence of any opposition from the PAF, IAF lost ten aircraft to AAA in the East including one Canberra on 15 December 1971 when IAF was ‘roaming the skies at will’.18