A Vision of Maritime India 2020 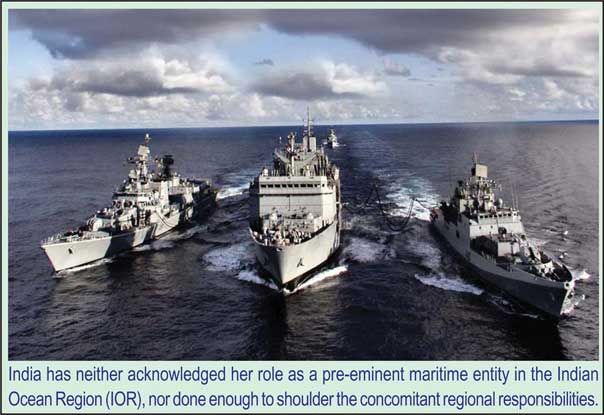 “What ship? Where bound?” is the traditional nautical query that goes out on the air when a warship encounters a stranger on the high seas. Recently an Indian Navy frigate on passage to the Persian Gulf was challenged on radio by a ship of the Coalition Task Force on patrol: “Unknown ship what are you doing in this area?” The IN ship shot back with barely concealed annoyance, “I happen to be an Indian warship in the Indian Ocean. What are YOU doing here?”

While this story may be apocryphal, it does serve to illustrate two aspects. Firstly that old mindsets take time to dissipate; guarding the seas East of Suez was historically considered the ‘white man’s burden’, and in some perceptions we may still be seen as interlopers in our own backyard. And secondly, that India has neither acknowledged her role as a pre-eminent maritime entity in the Indian Ocean Region (IOR), nor done enough to shoulder the concomitant regional responsibilities.

While others are reluctantly coming to terms with India’s quest for her rightful place in the evolving world order, Indians themselves have remained irresolute and diffident in this regard. Consequently, there is a likelihood, that the concept of ‘Maritime India’ may present a conundrum, to the citizens of a nation which has remained hostage to a continental mind-set for centuries.

Therefore, before making out the case for a Maritime India, a decade and a half into the future, I would like to briefly take my countrymen back into the hoary past to examine the context in which a substantive maritime underpinning can be claimed for India’s history.

While we revere our past and have been brought up to blindly believe that we are the inheritors of a great culture and tradition, as a nation we have been sadly remiss in neither researching the past, nor adequately recording our own history. William Dalrymple provides us a poignant reminder of this shortcoming in the Introduction to his celebrated new book, ‘The Last Mughal’. He refers to the 20,000 virtually unused Persian and Urdu documents relating to Delhi in 1857, known as the Mutiny Papers, that he found on the shelves of the National Archives of India and says, “…the question that became increasingly hard to answer was, why no one had used this wonderful mass of material before.”

It was left to conscientious British administrators, Jesuit scholars and other European researchers to unravel our glorious past by learning Sanskrit and studying our sacred Vedic literature. The discovery and collation of India’s history and culture by European scholars not only created great respect for it amongst them, but also inspired Indian nationalists to value and cherish their own inheritance, as they had never before viewed India from such a perspective.

However, those who write history also enjoy the license of giving it whatever slant they wish to; and this as we will see, is often at the cost of objectivity.

Almost all works on maritime history from Western sources start with a description of the seafaring tradition of the Mediterranean basin (circa 2500-2000 BCE), and dwell on the sea power of Crete, Phoenicia, Greece, Carthage and Rome. The first reference to the Orient generally relates to the Greco-Persian war in the 5th and 4th centuries BCE, where mention is made (with relief) of how Greek sea power thwarted an “attack by Asia on Europe”. In this context Greece was fortunate in having two accomplished historians: Herodotus who is known as the “father of history”, and the Athenian historian-soldier Thucydides, who maintained a meticulous record of the Peloponnesian Wars between Athens and Sparta (431-404 BCE).

In the fifteenth and sixteenth centuries Western Europe came once again under threat from the east; this time from sea power of the Ottoman Turks, who brought pressure to bear in the Mediterranean. The Battle of Lepanto in 1571 put an end to this last Asiatic challenge. Historians conclude that this was also the period that seafaring countries of Europe made certain breakthroughs in the fields of ship-construction and navigation, which enabled its sailors to start undertaking long-distance voyages. At the same time advances in gunnery and specialised fighting vessels provided them the means of overwhelming the opposition of ‘other races’.

It was the Indian Ocean, and specifically the lands washed by the Arabian Sea, which saw the first naval and oceanic sailing activity.

As Paul Kennedy puts it, the Western onslaught into the East was inspired by a mixture of political, religious and economic motives, particularly the latter. Once the Spanish and Portuguese fleets had demonstrated the ease of conquest, and the economic benefits to be gained by such maritime forays, the race was on, with Dutch, French, and English adventurers joining in what became a scramble for trading links, political advantage, proselytisation and loot.

So much for early maritime developments in the West; but it is intriguing to note that nowhere in these historical accounts does one find even a passing mention of India or the seafaring skills of ancient Indians.

For this we have to turn to the lone voice of Sardar KM Pannikar (1895-1963), our first ambassador to China, who combined in himself the attributes of statesman, diplomat, historian and visionary. Among the large number of his works in Sanskrit, Malayalam and English is a seminal essay entitled ‘India and the Indian Ocean’. First published as a monograph in 1945, this treatise is now out of print, and although read and quoted extensively by foreign scholars, it is little known to Indians. 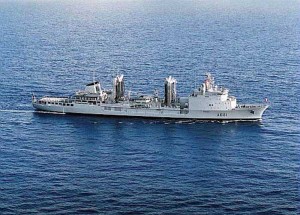 According to Pannikar, for geo-physical and meteorological reasons (currents, prevailing winds etc.), it was the Indian Ocean, and specifically the lands washed by the Arabian Sea, which saw the first naval and oceanic sailing activity; and European historians err grievously when they assume that the navigational tradition first emerged around the Mediterranean.

Long before seafaring developed in the “limited” Aegean waters, according to him, oceanic navigation had become common with the coastal people of peninsular India. He clinches his argument by stating that: “Millenniums before Columbus sailed the Atlantic and Magellan crossed the Pacific, the Indian Ocean had become a thoroughfare of commercial and cultural traffic between the west coast of India and Nineveh and Babylon (modern Iraq) as well as the Levant (E. Mediterranean)”.

Pannikar goes on to assert that not only do the earliest Indian literature, the Vedas (1500 BCE), speak frequently of sea voyages, but that much of the materials found in the remains of the Indus Valley Civilisation (3000-2500 BCE), and many products discovered in Mohenjodaro came either from the shores of the Red Sea or the extreme south of India and “could only have been transported by sea”. He places Indians firmly alongside the Greeks and the Arabs as ancient seafarers and claims that the Hindus had already in use a magnetic compass (matsya yantra) for accurate navigation, and having acquired the skills to build ocean going ships of great strength and durability ventured into the distant reaches of the Arabian Sea.

Of all the Indian flagged vessels, only about 10 percent have been built in Indian shipyards because of higher costs, lengthy delivery times and indifferent quality.

Though Socotra was perhaps an Indian settlement and Indian communities existed in Alexandria, and in other locations in the Red Sea and the Persian Gulf, maritime activity in the Arabian Sea was confined to commercial purposes only. On the other hand, the Bay of Bengal provided a highway for a succession of kingdoms in the southern and eastern Indian peninsula to embark on cultural, colonisation and proselytisation missions to lands beyond the Malacca Straits – as Far East as Japan. Interestingly, Pannikar debunks the commonly held belief that all Hindus had a religious objection to crossing the seas, saying: “it was never true of the people of the South”.

Pannikar recounts the continuum of colonisation as well as cultural and religious osmosis from India’s east coast, by sea to Southeast Asia. Starting with the Mauryan emperors, he traces Indian maritime activism through the Andhra, Pallava, Pandava, Chalukya and Chola dynasties. To make his point about intrepid Indian mariners providing continuous cultural sustenance and support from the ‘mother country’, he refers to the 500-year long dominance of the seas by the Sumatra based Sri Vijaya Empire (of Indian provenance) and to the growth of large Hindu kingdoms and empires in Champa (Siam), Cambodia, Java, and Sumatra from the 5th to the 13th centuries.

From this apogee, India’s maritime prowess went into rapid decline, mainly because the Central Asian dynasties, which ruled in Delhi, knew more saddles and stirrups than concepts of sea power.

The arrival of the 20-gun Portuguese frigate San Gabriele off Calicut in May 1498 marked the beginning of what Pannikar terms as the ‘Vasco da Gama epoch’ and commencement of four centuries of ‘authority based on control of the seas’ by European powers; and not all the daring, valour and patriotic fervour of the Zamorins, Marrakars or Angres could stand up to it.