A Two-Two as Army Chief 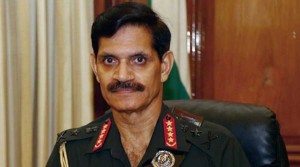 General Dalbir Singh Suhag, has yesterday taken over as the 26th Indian Chief of the Army Staff (COAS), following the retirement of General Bikram Singh.

General Dalbir Singh Suhag is from the Gorkha Rifles.

Earlier in his career, he served as a Commandant (Inspector General) of the Special Frontier Forces (SFF), the Tibetan Army based in Chakrata, Uttarakhand.

The SSF is not directly under the Army, but operates under the Cabinet Secretariat.

The SSF is not directly under the Army, but operates under the Cabinet Secretariat.

The SSF is also knowm as ‘Establishment 22′, or simply the ‘Two-twos’, because its first Inspector General Maj. Gen. Sujan Singh Uban earlier in his career had commanded the 22 Mountain Brigade.

On the occasion of a ‘Two-two’ assuming the highest post in the Indian Army, I repost an article published 2 years ago in The Pioneer.

I am not sure, if, as Army Chief, General Suhag will sing the ‘Vikasi’ song.

My article on the Tibetan Two-twos, Consigned to the dustbin of history appeared in the Edit page of The Pioneer.

The ‘unacknowledged’ brave men of the Tibetan Army’s Special Frontier Forces fought well in wars which were not theirs. They remain ready to defend India. The least one can do is remember them next November 14

For most Indians, November 14 means the birthday of Jawaharlal Nehru. It is not my purpose to comment here on the first Prime Minister of India, I just would like to mention another anniversary, an ‘uncelebrated’ one, occurring on the same day.

Many are not aware that the Tibetan force participated in the liberation of Bangladesh in 1971. Under the cover of the Mukti Bahini, the Tibetans infiltrated East Pakistan a few weeks before the beginning of the war.

The second one has for long been kept secret: I am speaking of the creation of the Special Frontier Forces, the Tibetan Army (also known as the two-twos) which was founded a week before China’s unilateral cease-fire in the 1962 conflict. There is little doubt that the two events (Nehru’s birthday and the SSF’s creation) are linked, as sycophancy prevailed in India during those days.

Why was the formation of the Tibetan Army initiated on October 14? BN Mullik, the then Director of the Intelligence Bureau (and one of the main culprits of the 1962 fiasco) probably wanted to please Nehru on his birthday by telling him that he ‘had found a solution’ to China’s military superiority. The Tibetans would themselves ‘liberate’ Tibet!

But Mullik realised he would need help for this; and he looked towards the United States.

On November 19, the day Nehru sent panicky two letters to the US President, a crucial meeting to answer Nehru was held in the White House. The then Secretary of Defence Robert McNamara, the Secretary of State Dean Rusk, as well as his Assistant for Far Eastern Affairs, Averell Harriman, a most respected diplomat and politician, were present. The CIA bosses were also in attendance.

The declassified US archives tell us: “McNamara urged that the first move be to find out what the real situation was. If we were to put our prestige and resources at risk, we must find out the score. He proposed sending a small high-level military mission immediately to Delhi. …McNamara again urged getting a high level mission out to Delhi, including State and Intelligence people in order to concert a plan of action with the Indians.”

Kenneth Conboy and James Morrison in their book The CIA’s Secret War in Tibet recounted: “Also mentioned (during the meeting) was the possibility of using the CIA’s Tibetan guerrillas. John McCone, a wealthy and opinionated Republican chosen by Kennedy to replace CIA Director Dulles after the Bay of Pigs, was on hand to brief the president on such covert matters. Joining McCone was Des FitzGerald, the Far East chief.”

McNamara’s delegation arrived in India three days later; during their stay, the CIA officials held lengthy discussions with BN Mullik. According to Convoy who quotes from David Blee, the CIA station chief in India: “The Indians were interested in the Tibet program because of its intelligence collection value…Mullik was particularly interested in paramilitary operations.” Mullik and his deputy ML Hooja made a special request during a session with FitzGerald and Blee. “They made us promise that our involvement would remain secret forever.”

As they did not ‘exist’ officially for the Government of India, nobody could be decorated.

By the end of the Harriman mission, the CIA and IB had arrived at a division of tasks; the IB with CIA support would train a 5,000-strong tactical guerrilla force; the CIA’s Far East Division would create a strategic long-range resistance movement inside Tibet and the Tibetan freedom fighters in Mustang (Nepal) would remain under the CIA’s control.

The honeymoon with the CIA did not last long and the Tibetan Force would eventually be built with purely Indian inputs under the supervision of Maj Gen Sujan Singh Uban (The SSF became later known as ‘Establishment 22’ or ‘Two-twos’ because Uban had earlier served as commander of the 22 Mountain Brigade).

Many are not aware that the Tibetan force participated in the liberation of Bangladesh in 1971.

Under the cover of the Mukti Bahini, the Tibetans infiltrated East Pakistan (soon to be Bangladesh) a few weeks before the beginning of the war. They conducted raids to destroy bridges and communication lines deep inside Pakistan’s eastern province. The operation was so secret that most Generals of the Indian Army’s Eastern Command in Calcutta did not know about the activities of 3,000 Tibetan jawans commanded by two Tibetan Dapons (equivalent to brigadiers in the Indian Army, also known as ‘Political Leaders’).

Though Major General SS Uban, (his designation was Inspector General) wrote his memoir The Phantoms of Chittagong, he only obliquely refers to his troops as Tibetans.

Ratuk Ngawang who was a ‘Dapon’ at the time of the Liberation of Bangladesh recalled: “The Force was established in 1962, after the Indo-China War. The main objective of the regiment was to fight the Chinese army with the help of the Indian Army. The plan was to engage the Chinese army in a military conflict within 5 or 6 months of the Force’s creation. But the Indo-China war came to an abrupt end (on November 22), and due to severe international pressure to maintain peace, no further military engagements occurred with China. Therefore, the services of Establishment 22 regiment were not used as planned.”

…the SFF have in some cases been replaced by the Ladakh Scouts and other local troops who can also acclimatise easily for high altitude warfare, they remain ready to fight to defend India’s frontiers.

When asked who ordered the SFF to take part in the 1971 war, Ratuk Ngawang answered: “A special army meeting was held in New Delhi (probably under RN Kao, the RAW Chief); later we heard that General Uban had volunteered to lead the Establishment 22 regiment in the Bangladesh war. It was SS Uban and my colleague Dapon Jampa Kalden who voluntarily decided to take part in the war.”

Ratuk Ngawang added: “When the regiment was established, there was a mutual agreement that we would fight the Chinese. This did not happen. However, I told General Uban and Jampa Kalden that if we were to get a formal order from the Indian government then we could join the operations.” They did.

The website Bharat Rakshak provides more information on the SFF’s achievements in Bangladesh: “After three weeks of border fighting, the SFF divided its six battalions into three columns and moved into East Pakistan on 03 December 1971.”

By the time Pakistan surrendered, the SFF had lost 56 men, nearly 190 were wounded, but it is said that they blocked a potential escape route for East Pakistani forces into Burma and would have halted Pakistan’s 97 Independent Brigade in the Chittagong Hill Tracts.

As they did not ‘exist’ officially for the Government of India, nobody could be decorated. However, some brave Tibetan commandos were awarded cash prizes by the Indian Government. 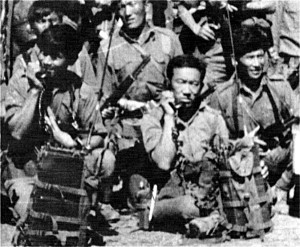 SFF during during Bangladesh Operations

It is also necessary to mention some of the many operations in which the SFF participated: An attempt to plant a nuclear-powered sensor on the Nanda Devi in 1965, a regular presence on the Siachen Glacier or in the Turtuk sector during the Kargil conflict.

Though the SFF have in some cases been replaced by the Ladakh Scouts and other local troops who can also acclimatise easily for high altitude warfare, they remain ready to fight to defend India’s frontiers.

I still remember a poem written in Hindi by a Tibetan SFF jawan who had participated in the Kargil operations; the song of the poet-jawan described joy, sorrow and emotion by expressing his gratitude to his second motherland and to the people of India who had given refuge, protection and education to his countrymen.

It is difficult to say today what is the future of the two-twos, but one can at least acknowledge that they fought well in wars which were not theirs and if the new leadership of China were to choose adventurism as its new policy and walk in the footsteps of Mao, one can be certain that the two-twos will be here to defend India. One should not forget them next November 14.

The Chinese snatched Tibet from us

and kicked us out from our home

One day, surely one day

we will teach the Chinese a lesson

we will play with our lives In the Siachen glacier

we got our second chance

have no sadness whatsoever

Whether it is Kargil or Bangladesh

we will not lose our strength

we will play with our lives

Where there is our Potala Palace

The throne of the Dalai Lama

was dear even then

Remember those martyrs of ours

who sacrificed with their lives

3 thoughts on “A Two-Two as Army Chief”