1962: The Sino-Indian War: Reflections of the Past 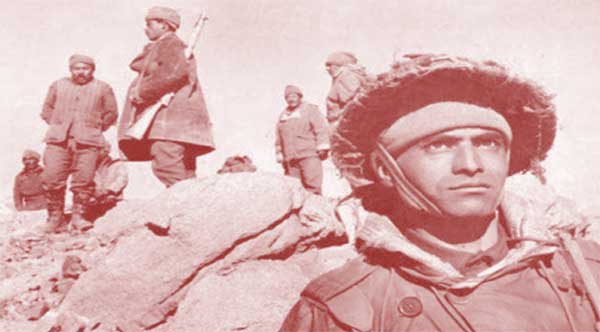 The 1962, Sino-Indian war is (rightly) remembered by Indians by its ignominy. While, this is justified, it needs to be heighted that the roots of the debacle lay squarely with the leadership; the war having been lost much before battle was joined. At the same time, it needs to be highlighted that wherever, and whenever directions were clear, despite being ill-equipped, ill-clad and hastily deployed in inhospitable conditions, Indian troops fought well, proving that the Chinese were no supermen – Rezang La being an incomparable example. The problem were ‘lack of nerves’ in the corridors of power in New Delhi and ipso-facto, the ‘enfeebled control’ of higher commanders and not with the soldiers.

The problem were ‘lack of nerves’ in the corridors of power in New Delhi and ipso-facto, the ‘enfeebled control’ of higher commanders and not with the soldiers.

A revisit to this excruciating part of the nation’s history, especially at a time when the brilliance of Diwali radiates across the nation, memories of the Diwali fifty-three years ago when the nation was shrouded by gloom, immortalised by the poignant voice of Ms. Lata Mangeshwar singing ‘Ai mere watan ke logon’need to be recounted to underscore defeatism in ‘being ill-prepared – diplomatically, militarily and emotionally. Mankindshould learn from history, and it is a sad reflection on the state of affairs that there is still reluctance to exhume the skeletons of the past, secreted behindclassified closetsin the (misguided) interests of national security.

Having said that, lessons learnt from ‘open’ sources, remain pertinent even today, especially in view of the dynamics which drive Sino-India relations. This is relevant to highlight, since, it ‘was’ and ‘is’ seemingly ordained by the western world that both Asian powers are natural rivals, hence adversaries – a sentiment reinforced by the ‘deeper than the sea and higher than the mountains’ Sino-Pak relationship. This, may or may not conform to the strategic interests of the India, especially at this critical stage of her strategic progression. Having said that, the right politico-military balance needs to be maintained.

Over three parts, extracts of the book ‘The Crimson Chinar-The Kashmir Conflict: A Politico-Military Perspective’ will be presented with a brief backdrop; this being the first. Though the book perse, deals with the conflict as it unfolded in Kashmir (Ladakh), the issues of the war, which remain unknown or are glossed overare being presented as a series over the week.

The Concurrent Re-emergence of India and China

it was the occupation of Tibet by Communist China when for the first time in their long histories; both civilizations found themselves facing each other across the barren and un-delineated Indo-Tibetan frontiers.

…it was the occupation of Tibet by Communist China when for the first time in their long histories; both civilizations found themselves facing each other across the barren and un-delineated Indo-Tibetan frontiers.

Despite the fact that China and India have been powerful neighbours with overlapping spheres, there was nolegacy of conflict since the mighty Himalayas discouraged social intercourse. Like it had been in the case of the first Kashmir War, the roots of the Sino-Indian War of 1962 can be traced to the omissions and commissions of the British as they had played their Great Game for the domination of Asia; a game which stimulated the creation of spatial buffers. In the case of China, the barren plateau of Tibet provided a formidable geographical buffer; despite being remote and difficult, Tibet was better connected with India than it was with China. It was largely because of this factor that despite the ‘convenient’ acceptance of Lhasa’s suzerainty to Peking, Britain, maintained her grip over Tibet. This legacy, which was inherited by India, was compounded by the ambivalence of ‘traditional frontiers’ and was driven by the dictates of the ‘Cold War,’ which created the circumstances for the Sino-Indian War. At independence, both nations, with their legacies of civilizational greatness exhibited an innate desire to ‘re-emerge,’ however, in physical terms, it was the occupation of Tibet by Communist China when for the first time in their long histories;both civilisationsfound themselves facing each other across the barren and undelineatedIndo-Tibetan frontiers.

Modern China and India had emerged as independent nations after intense struggles; their historiesof colonializationmaking them sceptic of western imperialism. China had emerged as a battle scarred nation who had not only fought the Japanese, but concurrently fought a long and intensely contested revolutionary war which resulted in the reincarnation of China as a Communist nation under Chairman Mao. On the other hand, India gained her independence after an equally longbut peaceful freedom struggle, though she too had fought a fourteen month long ‘infructuous’ war over Kashmir due to British machinations.

The debacle which followed reinforced the lesson of the first Kashmir War (1947-48) that Indians lacked ‘Strategic Vision,’ as well as the political will necessary to safeguard her vital interests.

Much has been made of their ‘concurrent re-emergence.’ It has been opined that with the independence of ‘democratic India’ and birth of a ‘Communist China,’exacerbated by the filling up the intervening space of Tibet and concurrent aspirations, their intersay relations cannot but be adversarial.John Garver, has commented on this ‘adversarial’ relationship. “A sense of urgency exacerbated this clash. In the second half of the twentieth century,India and China re-emerged with a strong sense of lost time and grievance against the world order that had denied them their rightful place for too long. Both countries wanted to put things right as quickly as possible.”[1]

Overview of the Sino-Indian Border War of 1962

The Sino-Indian war of 1962 war was unique in a number of ways. While purportedly, it was a war precipitated by conflicting territorial claims, it was a war for which China had prepared for and had won before the conflict was joined. It was also a war where India despite receiving adequate battle indicators, refused to read the writing on the wall and consequently, had very little to counter the threat which was becoming inevitable since 1950. India and the west dubbed it as Chinese Aggression, while the Chinese called it their ‘Counter Attack in Self Defensive on the China-India Border,’[2]implying that it was a reaction to Indian provocation and a defensive action taken in accordance with her professed doctrine of ‘active defence.’[3]For India, this was a war where for first time Indian and Western strategic interests converged, though this did not translate as collusive strength. On the other hand, this was a war when China, especially after the split with the Soviets, had enemies all around and was extremely vulnerable. However, she took advantage of the time window to pre-empt India’s strategic competition and stamp her pre-eminence in the region. The Indian leadership could neither fathom the intent nor appreciate the gravity of the situation. The debacle which followed reinforced the lesson of the first Kashmir War (1947-48) that Indians lacked ‘Strategic Vision,’ as well as the political will necessary to safeguard her vital interests. It was left to the Chinese leader Mao Tse Tung to teach the fundamental lesson that ‘Power comes from the barrel of a gun.’ In the real world, victory may be sought through diplomacy, but it is successful only when it is backed by military power. This is a fundamental lesson that India can ignore at her peril.

India demonstrated a dichotomous mismatch in her Aims and the Means, relying on bluster, goodwill and divine intervention.

In Kashmir, the Chinese were already in occupation of Aksai Chin before the war, the territory which mattered for her continued grip over Tibet. Since, she already controlled most of what she coveted, there seemed to be little point for her to go to war for – yet she did, and this reinforces the point that the war was initiated by China for not so obvious reasons. For China, Aksai Chin lay at the heart of the dispute and the raison d’être for the immediate conflict as it was only through this vital route that she could maintain her forces. However, since there was very little left of this desolate wilderness that she was not already occupying, hostilities in Ladakh were limited to demonstrative tactical battles, synchronised with the punitive actions in the east. The remoteness of the terrain in Eastern Ladakh entailed long and difficult lines of communications for both sides and this factor, coupled with the harsh weather conditions forced the Chinese to choose achievable objectives while the Indians defended to the best of the ability of the limited forces she had there. However, when war eventually broke out, unlike the debacle in the east, the withdrawal in Ladakh did not result into a rout though it was true that Ladakh was a side show and China did not press home her advantage.

This was a war which highlighted Chinese consistency of her perceived strategic aim(s) and displayed her determination to ensure them. Conversely, India demonstrated a dichotomous mismatch in her Aims and the Means, relying on bluster, goodwill and divine intervention. In South Asia, her aim was to dominate Tibet in order to pre-empt any imperialistic power from exploiting China’s weakness. After a century of humiliation, civil war and rebellion, China’s strategic priority was to secure her underbelly and this was her compulsion to occupy Tibet. It needs to be pointed out that this was undertaken at great risk to her security, as she was concurrently preoccupied with Taiwan, Korea and with America. The ‘liberation’ of Tibet, and the security this would provide China had always been high in the strategic priorities of Chairman Mao and within months of the establishment of the Communist regime in Peking, he proclaimed that Tibet had to be ‘liberated’ and there was an urgency to do so since China required time to build up against the more ominous threat of America, Nationalist KMT and the Japanese on her eastern sea board. China’s pre-eminence could only be ensured if India was not allowed to attain the stature of being a ‘near equal’ in South Asia, especially in military and economic terms. Chairman Mao was of the view that “If Tibet is not under firm Chinese control and Britain and other (India) imperialists were allowed to continue their presence there, Tibet would become a base from which the imperialists could menace China’s west. Counter revolutionary forces based in Tibet might join with similar forces elsewhere, possibly leading to a counter revolutionary victory on a nationwide scale…in the event of a war between China, India and the Soviet Union, Tibet’s location would make it extremely important.”[4]

The statement reiterated the apprehensions of Chairman Mao, and in the Chinese eyes the subsequent CIA sponsorship of the unrest in Tibet was seen as being facilitated by India and thus she had no doubts that India was culpable. From her perspective, the Indo-American nexus brewing trouble for China in her backyard mandated that India’s imperialistic ambitions needed to be nipped in the bud.

One thought on “1962: The Sino-Indian War: Reflections of the Past”