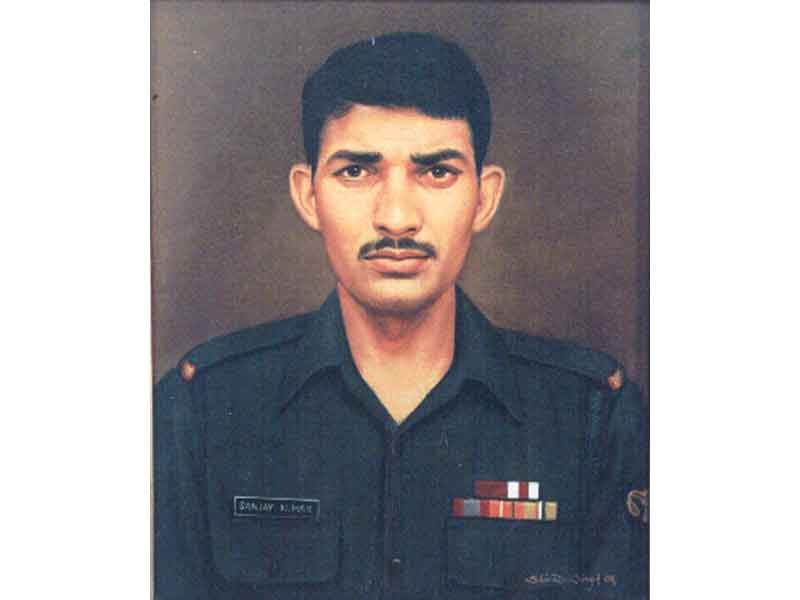 Rifleman Sanjay Kumar, 13 JAK Rifles, was the leading Scout of a team tasked to capturing Area Flat Top on 04 July 1999 being held by Pakistani-backed militants. Having scaled the cliff, the team was pinned down by machine gun fire from an enemy bunker, 150 meters away. Rifleman Kumar, realizing the magnitude of the problem and the detrimental effect this bunker would have in the capture of Area Flat Top, displayed extraordinary courage. Without concern for personal safety, he crawled alone up the ledge, along a flank, and charged towards the enemy bunker, through a hail of automatic fire. Almost instantly he took two bullets in his chest and forearm. Bleeding profusely from the bullet wounds, he continued the charge towards the bunker. Unhesitant, he then picked up the enemy machine gun and crept towards the second enemy bunker. Three enemy soldiers, taken completely by surprise were killed by him on the spot. Inspired by his dare devil act the rest of the platoon, emotionally charged, assaulted the feature and captured Area Flat Top. For his sustained display of the most conspicuous personal bravery and gallantry of the highest order in the face of the enemy, Rifleman Sanjay Kumar was awarded the Param Vir Chakra, India 's highest medal for gallantry. Rifleman Sanjay Kumar volunteered to be the leading scout of the attacking column tasked to capture area Flat Top of Point 4875 in the Mushkoh Valley on 4 July 1999. During the attack when enemy automatic fire from one of the sangars posed stiff opposition and stalled the column, Rifleman Sanjay Kumar realizing the gravity of the situation and with utter disregard to his personal safety, charged at the enemy. In the ensuing hand-to- hand combat, he killed three of the intruders and was himself seriously injured. Despite his injuries, he charged onto the second sangar. Taken totally by surprise, the enemy left behind a Universal Machine Gun and started running. Rifleman Sanjay Kumar picked up the UMG and killed the fleeing enemy. Although bleeding profusely, he refused to be evacuated. The brave action on his part motivated his comrades and they took no notice of the treacherous terrain and charged onto the enemy and wrested the area Flat Top from the hands of the enemy. Rifleman Sanjay Kumar displayed most conspicuous gallantry, cool courage and devotion to duty of an exceptionally high order in the face of the enemy.