Maoists and the Armed Forces

Armed forces personnel hailing from the Red Corridor are being subjected to intimidation and extortion by the Maoists for at least two decades now. The families of the servicemen residing in their native places are being forced to part with their hard earned money to fill the coffers of the Maoists. These servicemen, serving in some of the most difficult and remote areas on the borders, find it difficult to concentrate on their jobs of defending the nation because of the insecurity of their families back home. When they proceed to their homes after retirement, they are again made to surrender a part of the gratuity and commuted pension. While the servicemen protect the countrymen from external aggression, which includes the Maoists as well, their own security within the country has been of little importance to the State.

The overall security of the country is an interplay or harmony between internal and external security. External security cannot be guaranteed if internal security flounders. Such is the case with Maoism, which afflicts about 160 districts of India, i.e. 40 percent of the country’s territory. This is not a sudden development. In 1989, the former Indian Air Force Chief, Air Chief Marshal Dennis La Fontaine, who had chosen to settle in rural Andhra Pradesh, was robbed of his pistol by the Maoists. In fact, he was tied up with the chair and he remarked whether they were revolutionaries or dacoits? Twelve years down the line, i.e. in November 2001, he was again robbed of another pistol. Comparing the two incidents La Fontaine said: “The confidence of the teenagers this time was much higher because they were better armed.” In 1989, he maintained: “That seemed a ragtag bunch while this one came in jungle fatigues, boots and caps.” The State, however, did not show any resolve to tackle the menace of Maoism in the intervening years.

Now, the victim is a Group Captain of the Air Force, R K Prasad. He was made to pay Rs. 10 Lakhs for the release of his brother who was kidnapped by the Maoists in Jharkhand in this very year. The officer wrote to the Home Minister and was subsequently given a very patient and concerned hearing by the Home Minister and the Home Secretary.

Reproduced below is his letter to the Home Minister.—Editor

At the outset, I must express my deepest sense of gratitude to you for taking bold and firm steps towards eradicating the Naxal menace plaguing various states. It also gives me a sense of security and reassurance to be able to address my problems to you through the opportunity granted through your ministry’s website.

External security cannot be guaranteed if internal security flounders. Such is the case with Maoism, which afflicts about 160 districts of India, i.e. 40 percent of the countrys territory.

I am a pilot with the Indian Air Force with 28 years of meritorious service, with most part as a fighter pilot and subsequently as a helicopter pilot. I am presently employed as a Joint Director in the Directorate of Operations Room at Air Headquarters, Ministry of Defence, New Delhi.

It may not be out of context to mention here that my father, Honorary Capt BN Prasad, is a proud ex-serviceman who retired in 1975 after 30 years of military service as an infantry man. My younger brother, Sri SK Prasad, with whom my parents live as both are more than 80 years old, served for 12 years in the Indian Army before he took premature retirement in 1990 due to the poor health of my parents. My son, Flying Officer Ashwin Prasad, is also a fighter pilot with the IAF, commissioned in June 2008. And I wish to mention here that my daughter, Ms Neha Prasad is no less motivated and is all set to join the IAF and go for training at the Air Force Academy in January 2010.

Sir, such pride and honour in military service and the uniform, to commit three generations to take the pledge to make even the Supreme Sacrifice, when called upon for the sake of the nation, could not have been possible without faith and absolute trust that honourable and great leaders like you are at the helm of affairs, and are examples to ordinary citizens like us, in leading the nation ahead in its march to glory.

However, not all is as well as it sounds.

Therefore, I take this opportunity to highlight the monster that the Naxal menace has become in the state, and I say this with all conviction, having myself become the latest victim of militancy in Jharkhand.

I was travelling with my wife and daughter, on annual leave on 17 June 2009 by car to McCluskie Gunj in Ranchi District of Jharkhand to visit my parents, and my kin. Having put my wife and daughter in my house, which is looked after by a caretaker in my absence, I went to my brother’s house, which is about 800 metres away, to pay my respects to my parents who reside with him. Because of power failure there was no electricity in the area and even the telephone exchange was not working. 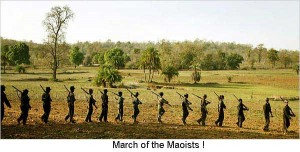 As soon as I entered the premises of my brother, I saw around 20 armed persons in camouflage fatigues, each one carrying a country made rifle. I was immediately surrounded by them. They started to interrogate me and asked if I was carrying a weapon or a mobile and simultaneously started to frisk me. They also frisked my caretaker who had accompanied me to my brother’s house.
1 2 3
Single Page Format
Rate this Article

One thought on “Maoists and the Armed Forces”