Home  >  Interviews  > Homeland Security  >  Indianness of Arunachal is not to be proven to anyone: Pema Khandu

Indianness of Arunachal is not to be proven to anyone: Pema Khandu 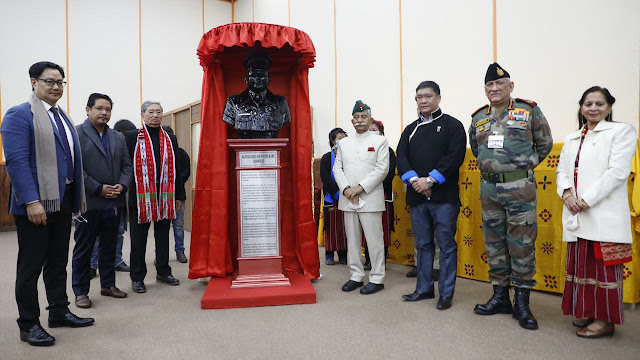 Inaugurating Maj Bob Khating Memorial with the Governor and the CDS, Gen Bipin Rawat in Tawang and Kiren Rijiju (right)

This is the second part of my interview with Pema Khandu, the Chief Minister of Arunachal Pradesh, Indianness of Arunachal is not to be proven to anyone.

‘Our love for our great nation — Bharat is second to none and our patriotism towards our motherland — India is for the entire nation to emulate.’

In April 2011, Dorjee Khandu, the chief minister of Arunachal Pradesh, died in tragic circumstances in a helicopter crash.

Soon after, his elder son Pema succeeded him as the MLA of Mukto in Tawang district; he was then only 32 years old.

Five years later, on July 17, 2016, after a long period of confusion in the state, Pema Khandu took oath as the chief minister; soon after, he joined the Bharatiya Janata Party.

During the 2019 legislative assembly elections, Khandu won a landslide victory with 41 seats out of 60 for the BJP alone.

The final segment of an exclusive two-part interview:

China is said to have built more than 600 ‘model’ villages on the border (most of them north of Arunachal). According to Beijing’s propaganda, there are two objectives: Poverty alleviation and defence of the border.

Arunachal Pradesh is home to patriotic 26 major tribes and over 100 sub tribes, we are a thriving society where people elect their leaders democratically by elections.

We are empowering our border regions to develop in conjunction with their culture and traditions.

We are running programmes where people decide to stay back out of free will in the border areas because the land, rivers and forests are sacred to us.

We are committed to protecting our environment and preserving it.

This is our model and it is an open source model. Anyone can use this model.

You have been trying to develop Arunachal as a sustainable tourism destination. Does the Bengal Eastern Frontier Regulation, 1873, known as the Inner Line Permit hamper your efforts?

Have you envisaged a sort of ‘digital’ pass which could remove the idea that Arunachal Pradesh is different from other states in India?

Inner Line Permit is not a restrictive regulation that hampers tourism but meant to conserve the culture and traditions of the indigenous tribal societies.

As the chief minister of the state, I have been talking of ‘High Value Low Volume’ tourism which is sustainable as well as provides employment to our youth.

We have made the process of granting the Inner Line Permit digital and is seamless.

Many places have been visited by Guru Padmasambhava, Guru Nanak or other saints/lamas/yogis. Do you envisage developing ‘spiritual’ tourism in Arunachal?

Not many are aware but Guru Padmasambhava and Guru Nanak Dev have travelled through the state.

Tawang has the largest monastery in the country and second largest in the world after the Lhasa monastery.

There is a beautiful Golden Pagoda in Namsai area of the state.

Malinithan has ancient temples in the Likabali area of the state.

We have the famous Parashuram Kund and a famous Shiva temple in the Ziro region.

There are various Christian denominations and some beautiful churches too in the state.

In March 2021 during the last National’s People Congress, a draft of China’s 14th Five-Year Plan was presented; it included the first phase for the construction of a mega hydropower plant or plants (thrice the size of the Three Gorges Dam) in the Great Bend area.

In view of the fragility of the Pemakoe area (seismic, landslide, biodiversity, etc) as well as the sacredness of the place, can something be done to put this project on hold?

The Government of India is taking all appropriate actions to secure the interests of her people and terrain of the region.

In 2009 at the conclusion of a two-day meet on environment, the chief ministers of five Himalayan states signed the Simla Declaration.

Do you think that this type of initiative should be repeated?

Would you take the initiative for a greater ‘Himalayan’ unity as far as environment and culture are concerned?

I have always been advocating that the Mountain States have their unique strength and challenges.

Therefore, the development model of this fragile ecology need a different treatment to take forward development of the area.

The Himalayan landscape and her people’s culture calls for unified and sustainable call for development.

We are mindful of taking these aspects very seriously, while taking up our development goals.

‘Migration’ towards the big cities seems to be a serious problem for your state. Can you elaborate? How are you planning to tackle this issue?

Yes, it is a universal phenomenon. Everyone wants to look for better avenues for a comfortable life for them and their families.

This is also true in Arunachal Pradesh.

While the same is NOT discouraged, the government’s endeavour is to provide all the basic facilities of health, education, housing etc in situ to encourage our people to live in the respective villages and ensure they are NOT uprooted from their roots.

We are also empowering our villages in the true sense in which Mahatma Gandhi talked of Gram Swaraj.

We have recently conducted the panchayat elections in the state and are determined to provide the 3Fs — Funds, Functions and Functionaries to the villages.

There are still too many remote villages in Arunachal Pradesh, with hardly any ‘modern’ facilities (school, dispensaries, communications, etc)? How do you plan to remedy this?

As I mentioned, we are late starter in our development journey.

However, in the last 6 years, we have added many ‘modern’ facilities in remote villages — Saubhagya for electrification, PMAY for housing, UJJAWALA for cooking gas and Jal Jeevan Mission to take potable drinking water to each household to name a few.

The government of Arunachal Pradesh conducted a programme called Sarkar Aapke Dwar or ‘Government at your Doorstep’ to take essential government schemes to extremely remote villages and benefitted over 4 lakh people.

Yes, we have still a lot of distance to cover and we are working towards this goal.

How does it feel to rule over a state claimed by another country? Do you think that more historical research could highlight the fact that Arunachal has never been part of China?

The Indianness of the People of Arunachal Pradesh is NOT to be proven to anyone.

Our love for our great nation — Bharat is second to none and our patriotism towards our motherland — India is for the entire nation to emulate.

Further to state on record that Arunachal Pradesh does not share any direct border with China, but it has a border with Tibet.