The deliberations, in the 1970s, of the United Nations Conferences on the Law of the Sea led to the establishment of India’s Exclusive Economic Zone (EEZ).

On 25 August 1976, India passed the Maritime Zones Act which claimed a 12- mile territorial sea, a 24-mile contiguous zone, a 200-mile EEZ and a continental shelf up to 200 miles or the outer edge of the continental margin, whichever was greater.

This in turn led to the need for a force for safeguarding this zone. 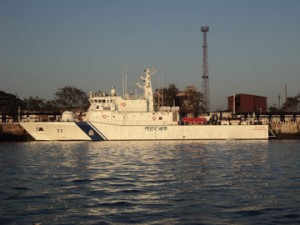 An interim Coast Guard was constituted on 1 February 1977 with two frigates and five patrol boats transferred from the Navy. Its tasks were to enforce India’s laws in the field of customs, immigration, poaching, and pollution at sea. It functioned under the aegis of the Navy until 1 August 1978.

The permanent Coast Guard was constituted as an armed force of the Union on 19 August 1978, under the Coast Guard Act – 1978, which came into force on that day.

The Act specified the Coast Guard’s duties and functions:

The Regulation of Fishing by Foreign Vessels in the Maritime Zones of India Act came into force on 2 November 1981. It laid down the procedure to regulate fishing by foreign vessels in India’s EEZ and provided for deterrent punishments like levying fines, confiscation of craft, etc. for illegal fishing in the EEZ.

Concurrently, notifications were issued extending the provisions of the Criminal Procedure Code and the Indian Penal Code over the EEZ.

The Coast Guard thus became the principal organization for enforcing all national legislation in the Maritime Zones of India, and the policing, surveillance and patrolling of:

In the implementation of the above, the Coast Guard is:

The structure that has evolved over the years is:

The Coast Guard participates in a number of peacetime activities in these maritime zones which include joint Search and Rescue exercises and conferences on issues like piracy and Search and Rescue.

Over the years the Coast Guard has undertaken joint exercises with foreign Coast Guards:

The Coast Guard has interacted also with maritime organizations like the ASEAN Regional Forum Workshop on Maritime Piracy and the International Maritime Search and Rescue Conference.

In 2001, the Coast Guard reached out as far as Japan to participate in an Indo-Japan Coast Guard Exercise.

The evolution of the Coast Guard has been remarkably cost effective. Most of its ships and aircraft are indigenous. With the Navy’s help, its manning and training have been extremely economical. Its anti-poaching operations, its anti-smuggling assistance to the Customs, its pollution-control operations, its protection to endangered marine species like the Olive Ridley turtles on the Orissa coast, its Search and Rescue Operations, its sustained round-the-clock surveillance in the shallow waters of the Palk Bay between Tamil Nadu and Sri Lanka, all have been invaluable.

From the time of its inception in 1978, the Coast Guard had, in round figures:

As is done by other Coast Guards of the world, India’s Coast Guard would during hostilities, function under the overall operational command of the Navy.

During the Kargil War in 1999 and during Operation Parakram in 2002, Coast Guard vessels and aircraft provided invaluable support to the Navy’s operations in the Arabian Sea.

Directors General of the Coast Guard

To ensure the closest possible interaction between the Navy and the Coast Guard, the Directors General of the Coast Guard have been senior Vice Admirals, except briefly on two occasions in 2001 and 2005.