India Lags Behind in Shipbuilding

There has been consistent boom in shipbuilding since 1990s. The main reason for this has been the rise in the volume of International trade due to healthy long range economic and energy demands. In addition the replacement of the single hull oil tankers have also contributed to driving new shipbuilding and this factor will continue to drive shipbuilding till 2010. The world Fleet has been growing steadily ever since 1990 and currently in the year 2007 it is 810 million GT and this is poised for growth to 1215 million GT by 2015. The average growth is expected to be 5.8 % during 2006 – 2010 and 4.1 % during 2011-2015.

China has dramatically grown in its shipbuilding capacity. The Chinas aim is to become second by 2010 and leading shipbuilder nation by 2020.

The above trends in the growing demands for new shipbuilding had been known and predicted. In order to take advantage of this boom in shipbuilding in the world, countries like Japan, S Korea and China had taken timely steps to enhance their shipbuilding capacity and opened new shipyards. They are now reaping the benefit of their actions taken well in time.

S Korea continues to enjoy the lion’s share of the world shipbuilding and likely to keep this supremacy for at least another ten years. Japan is number second. China is number three. During the year 2005, the delivered GT in the world stood as follows: 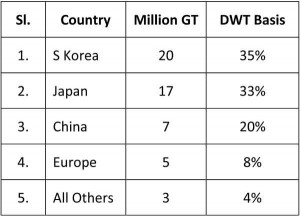 China has dramatically grown in its shipbuilding capacity. The China’s aim is to become second by 2010 and leading shipbuilder nation by 2020. There are currently 150 shipyards in China. It is understood that from March,2006 to August,2006, 45 new shipyards were added. Japan is setting up new shipyard in China to deliver 100 ships every year.

India has not been blind to the booming shipbuilding industry for the last 15 years. But we have not so far succeeded in increasing our shipbuilding capacity. The intentions are there but have not materialised so far all these years.

The increase in the shipbuilding capacity earlier in Japan, then in S Korea and now in China has been possible due to generous incentives by their respective Governments. Some of these incentives are enumerated below:-

It is understood that a large number of Naval architects from India are working in the Korean Shipyards.