Hafiz-Vaidik meet could be calamitous 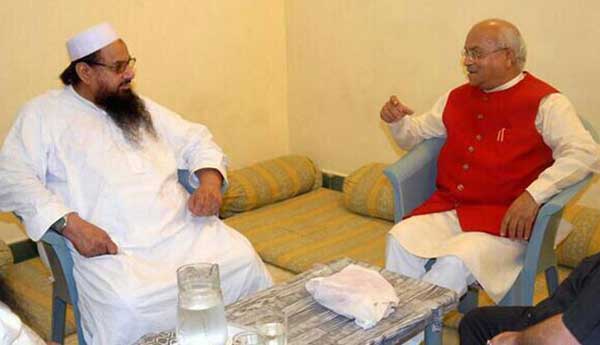 Indian news has been abuzz with the meeting of Ved Pratap Vaidik with in an internationally wanted Pakistani terrorist, Hafiz Saeed, while on a private trip to Pakistan. Much has been spoken on the rather unsavoury subject over the past few days, especially on the news channels. The Government of India, under fire of the opposition, has tersely disassociated itself from the meeting. The embarrassment of the government is compounded by the fact that even though Vaidik holds no political office, he is known to be ideologically associated with the ruling dispensation.

While the Indian press is going overboard in decrying the meeting, the Pakistan media is having a time of its life. It is giving out “structured inputs” that portray India as rigid and dogmatic in its approach towards Kashmir.

Experts feel that the kind of attention that the issue is getting is unwarranted. It is best to put the matter at rest but not before comprehensively listing the lesson learnt.

Having himself created the storm Vaidik is quite unrepentant about the meeting. He insists that he went for the meeting with the purpose of “analysing the mind of Hafiz Saeed about India and to understand what makes him commit such heinous crimes against India.” He also wants the country to believe that he met Hafiz Saeed after gaining enough information about the latter’s “humanitarian activities.”

While the Indian press is going overboard in decrying the meeting, the Pakistan media is having a time of its life. It is giving out “structured inputs” that portray India as rigid and dogmatic in its approach towards Kashmir. Hafiz Saeed is being portrayed as a much maligned innocent in the entire incident. He has expressed “shock” in the media over the “reaction of the Indian politicians to the meeting which has revealed the true face of India veiled behind a so-called secular demeanour.” The foregoing reaction of Hafiz Saeed has been taken from a prominent English newspaper of Pakistan – The Daily Times. He has also defined the proceedings as “utterly shameful” on Twitter. Doubtless the Urdu press and the news channels in Pakistan will be more belligerent.

Much is known about Hafiz Saeed and his terrorist organisation the Lashkar-e-Taiba (LeT) whose main objective is the disintegration of India. The US has acknowledged his terrorist activities and put a $10 Million bounty on his head. Pakistan bends backwards to project him as the head of a charitable organisation, the Jamaat-Ud-Dawa (JUD), that is supposedly dedicated to the spread of true teachings of Islam and establishment of a pure and peaceful society. Hafiz Saeed plays the role of a benevolent patriarch to the hilt. He addresses peace congregations and speaks of brotherhood while eloquently articulating the active participation of JuD in relief and assistance to victims of natural disasters, internal displacements and other calamities.

The disaster has come by as a golden opportunity for Hafiz Saeed to garner huge amount of funds to further his evil designs against India.

Significantly, he also leads the anti-India assault of fundamentalists in Pakistani, especially through the Urdu press. The focus is unmistakably to create an environment of hatred on religious grounds. He makes no bones in declaring his aversion and enmity for Hinduism and Judaism; he repeatedly declares the two religions to be enemies of Islam and swears to wipe them out from the face of the earth. He tells the poor uninformed people of Pakistan that India is going to deprive them of water and thus jeopardise their very survival. He asserts that India is creating a Sunni-Shia rift in Pakistan and India is behind the problems in Baluchistan. This is the most obnoxious and evil form of propaganda possible.

The true face of JuD is now known to the international community; the US State Department on June, 26, 2014, imposed a ban on the organisation for being a front for the LeT. Even the United Nations, in 2008, had declared JuD a front for LeT. Authorities in Pakistan had vowed to crack down on the outfit but nothing has happened till date.

Despite all the pressure, the position of Hafiz Saeed in Pakistan stays as firm as ever. Pakistan is presently confronting the miserable fall out of its ill conceived Operation Zarb-e-Azb launched to flush out Pakistan Taliban militants in North Waziristan. The military assault has not made a perceptible dent on the militants but almost a million innocent civilians have been displaced. International aid for these hapless people is pouring in, the combined US-Saudi Arabia effort itself accounts for more than $50 million; more is forthcoming from the UN and other agencies.

Once again it is Hafiz Saeed who is in the forefront to benefit from this largesse. The Fallah-e-Insaniyat, made responsible to conduct the relief activity is an off shoot of the JuD. This is apparent from the fact that it does not have a web-site or an address of its own and all of its activities are being carried out in conjunction with the JuD.

Hafiz Saeed has committed his entire life to the dream of destroying India. He enjoys, in his ambition, unrelenting support of powerful organisations within Pakistan like the ISI apart from many others in the international arena.

The disaster has come by as a golden opportunity for Hafiz Saeed to garner huge amount of funds to further his evil designs against India. He now also has a huge mass of deprived humanity to get recruits from. Instead of looking bleak, things are getting better for him by the day.

In his capacity of being a journalist, albeit semi-retired and out of the mainstream, Vaidik has the right to meet all persons across the spectrum that he is engaged with. One, however, wonders as to how he could control his revulsion while coming face to face with a person like Hafiz Saeed who harbours so much venom against his country. The justification for the meeting that he is now presenting and the outcome that he is talking about is something that the nation is finding rather difficult to digest. If his action was designed to get the people of the two countries closer to each other he has failed miserably. He has, instead, caused considerable embarrassment to his country and his government.

Hafiz Saeed has committed his entire life to the dream of destroying India. He enjoys, in his ambition, unrelenting support of powerful organisations within Pakistan like the ISI apart from many others in the international arena. There is nothing more to learn or know about this evil criminal and sworn enemy of our country and its people.

If Ved Prakash Vaidik or anybody else feels that terrorist leaders in Pakistan, the likes of Hafiz Saeed, can be deviated from their goal, they are living in a fool’s paradise. To meet them and speak to them can serve no purpose other than causing embarrassment to the nation. This is the enduring lesson that has been learnt from the unseemly and unfortunate incident.