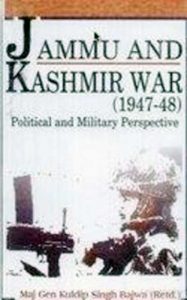 “On 12th and 13th December 1948, the Indian Air Force bombed a Pakistani military stores and ammunition dump at Palak, situated between Kotli and Mirpur. These activities appeared to have added a new dimension of reality to the already existing Pakistani fears of a major Indian offensive…… A counter-offensive to disrupt the Indian line if communication had now become an active option. Operation Venus was conceived and designed to destroy either the bridge at Akhnur or at Beripattan by concentrated fire attack with armour and artillery.”

Pakistan’s 7 Infantry Division, commanded by Major General Loftus Tottenham was given the overall operational responsibility of Operation Venus. A number of other British officers holding senior positions in the Pakistan Army assisted him in planning and mounting Operation Venus. Lieutenant Colonel Southey was the overall commander of all the artillery employed during Operation Venus. Elsewhere, there was one Major Sloan who commanded 71 Field Company under 10 Brigade in the Kishanganga Valley who was killed in June 1948, while clearing land mines. Lieutenant Colonel Harvey Kelly moved into the Jhelum Valley on 22nd May 1948 and was engaged in operations against 161 Indian Brigade till 17th July when a Pakistani officer relieved him. Earlier, on 1st August 1947, Lieutenant Colonel Roger Bacon, Major William Brown and Captain Mathieson with co-conspirators of Gilgit Scouts conducted a coup by which the Northern Areas of Gilgit-Baltistan was acceded to Pakistan.

Thus, it was not the last time in 1848-49 that the Indian native armies fought the British when the East India Company with its Bengal and Bombay Armies fought the Sikhs in the Second Anglo-Sikh War nor was it in 1857-58 when the Bengal Army rose to fight the Company in the First War of Independence. It was actually in 1948, one year after India’s Independence, that the Indian Army fought military forces led and commanded by British Officers.

The Book – Jammu and Kashmir War (1947-48): Political and Military Perspective, by Major General Kuldip Singh Bajwa, (Har-Anand Publishers Pvt Ltd, New Delhi, 2003), captivatingly brings out “an unequal equation between a naive and inexperienced Indian leadership and the wily British who knew what their national objectives were, and which they relentlessly pursued backed by a couple of centuries of experience in the art of intrigue and manipulation. The Indian response was weak-kneed and overly diffident.”

As military men we tend to deliberate on the accounts of the military battles and encounters during the 1947-48 War which have been studied individually to learn tactical lessons; higher direction of war and the political perspective is generally glossed over. In this book the Author has meticulously covered the details which expose the gross British manipulations and machinations.

The Author opines that on securing India’s independence the Indian leadership was reluctant to sever its umbilical cord of trade, industry and supply of defence stores from Britain. They considered that continued support of the British Government was vital to establish India as a functioning democracy. It was largely for this reason that substantive British presence was retained in the very top slots of the government. Lord Mountbatten became the first Governor General of India, he also convinced Nehru that instead of the Prime Minister heading the Defence Committee of the Indian Cabinet, it would be more beneficial that the Governor General heads it and Nehru naively agreed. Mountbatten had also advised Nehru to retain British officers to head the three wings of the armed forces and to head other sensitive slots. Lt Gen Nathu Singh claims that he has advised Nehru that retaining senior British officers would be against be against Indian interests. Sardar Patel too agreed with Gen Nathu Singh and recommended that India should have an Indian as Commander-in-chief, but Nehru rejected it. Nehru considered that Indian officers did not have sufficient experience in higher command and direction of war.

Apparently, Nehru had probably harboured a suppressed grudge against the military forces as he felt they did not play a substantive role in the fight for India’s independence. This mindset and Mountbatten’s advice influenced Nehru to retain General Sir Rob Lockhart (15 August 1947-31 December 1947) as the Commander-in-Chief who was relieved then by General Sir Roy Bucher (1January 1948-15 January 1949).  The Indian Air Force was headed by Air Marshal Sir Thomas Walker Elmhirst (15 August 1947-21 February 1950), followed by two more British officers upto 1954. As regards the Indian Navy the Chief during the War was Vice Admiral Sir William Edward Parry (26 January 1950 – 13 October 1951), followed by two more British Officers as Naval Chief’s up to 1958.

On the Pakistan side during the 1947-1948 India-Pakistan War the Army Chief was General Frank Messervy (15 August 1947 – 10 February 1948) succeeded by General Douglas Gracey (11 February 1948 – 16 January 1951), he was a personal choice of Jinnah who had known him for some time. The Pakistani Air Force Chief was Air Vice Marshal Allen Perry-Keene (15 August 1947 – 17 February 1949) and the Navy had Rear Admiral James Wilfred Jefford appointed as the Flag Officer Commanding (FOC) who worked on creating the contingency plan, “Short-term Emergency Plan (STEP)”, to work up the frigates and naval defences in case of escalation of the war at sea. Besides these senior commanders, over 500 other British officers were retained in command in the field force down to battalion/regiment level, in staff and instructional and advisory appointments.

In Pakistan there was a basic synergy between the Pakistani and British interests. There was, therefore, a marked harmony between British and Pakistani officers. As observed by the Author – “While the British officers in India, by inclination and by British policy thrusts, were pre-conditioned to keep the Indian policy on desired course to suit their common interests through an adroit mixture of advising, cajoling, cautioning and prodding”. This more than adequately brings out how the Indian leadership were compelled to take decisions and adopt certain courses of action which were not in India’s long term strategic interests and events since have proved so.

The Author observes the  -“The fact that Mountbatten, the blue-blooded cousin of the British King, couldn’t reasonably be expected to promote Indian interests at the cost of the British Imperial Agenda seemed to have escaped Nehru. In fact, Mountbatten during his tenure of office, both overtly and covertly, caused a great deal of deviation from far-sighted geo-strategic management of Indian security environment.”

It was a quaint situation where there were British officers in control of the militaries of both India and Pakistan. To expect them to turn into aggressive adversaries would be a complete denial of their bonding and camaraderie. There was a regular process of sharing information by the officers but the same was not shared the Indian leadership or the military. Plan for the capture of Kashmir by force was known to them well before the actual launch of the operation but not shared. Indian military found that whenever and plans of impending attacks were conveyed to the Army Headquarters in advance the Pakistanis seemed prepared for it. And when not conveyed the Pakistani’s were caught off guard.

When, by the first week of October 1947, it became known that the Ruler of J&K was most likely to accede to India, no plans were prepared to send military forces to defend the state. Neither did the government initiate adequate measures to prepare the armed forces for intervention. In fact the orders for airlift of troops were received at around 10 am on 26 October 1947, as if the armed forces were a police force being deployed for riot control and not for conventional war!!

At the apex of the political spectrum, Nehru held undisputed authority. Unfortunately he deferred overly to Whitehall, Mountbatten and the British Chiefs of the armed forces. Nehru was swayed by his “abhorrence of war”. He therefore tended to veer away from any course of action that might precipitate an open conflict with Pakistan. This weakness was mischievously exploited by Mountbatten to wrest a number of concessions favourable to Pakistan.

While Nehru had a very clear strategic idea of the importance of Kashmir, he refrained from taking effective military steps to ensure the security of that state due to “political considerations”.  He exhibited a rather indecisive diffidence to act even though being fully aware of ground realities. Mountbatten proposed a UN supervised plebiscite in the state. He also, unsuccessfully, tried to persuade Nehru to ask for a UN team to intervene to stop the fighting. Mountbatten was desperate to somehow bring UN into the conflict in J&K so that through international manipulations Britain could foist a solution upon India which would suit both Britain and Pakistan.  It was after a heated discussion in the Defence Committee chaired by Mountbatten, that Nehru accepted a compromise, which envisaged an appeal to the UN and simultaneously preparation of contingency plans to attack bases in Pakistan. Mountbatten was determined to frustrate the new aggressive approach of the Indian Cabinet. Mountbatten persisted in his effort and talked of international pressure and also by Britain hold back supplies of weapons, ammunition and spares of all the equipment held by the Indian armed forces.

Nehru was under a great deal of pressure from all the overwhelming British presence around him. He was expecting a fair deal prompted by his peace loving idealism and moral righteousness of the Indian case. Unfortunately, Nehru’s decision to refer Pakistan’s aggression in Kashmir to UN proved to be one of the biggest blunders of the Indian government. Nehru was naïve in expecting powerful nations to operate like a court of justice, ignoring their own long-term national interests and strategic concerns. In the UN machinations were set afoot to construe circumstances that would favour Pakistan. Britain deftly turned the Kashmir case before the UN into a territorial dispute between India and Pakistan. Rather than being branded an aggressor, Pakistan was made an equal party to a dispute which had no legal or moral rationale. J&K had been sucked into the vortex of international power politics and India found itself being helplessly spun around.

History is studied to draw lessons. This Book has lucidly covered the political and military events of that war. It has brought out amply that powerful nations dictate all the terms that run the world. They control the events around the world to suit their interests. Others just do their bidding. Pakistan has always been a master manipulator. Dealing with Pakistan needs a deft smart strategy. A case in point being the abrogation of Article 370 from the Indian Constitution which has been cunningly projected to the world by Pakistan as a move to target Muslims. India has a tendency to seek international approval and seeking brownie points and consequently compromise its interests. Its soft non-aggressive demeanour is exploited by the deceitful cunning and manipulative adversaries. Today India is under a hybrid attack if ever there was one. If these lessons are not heeded to, then India’s aspirations for being a global played will remain unattainable.