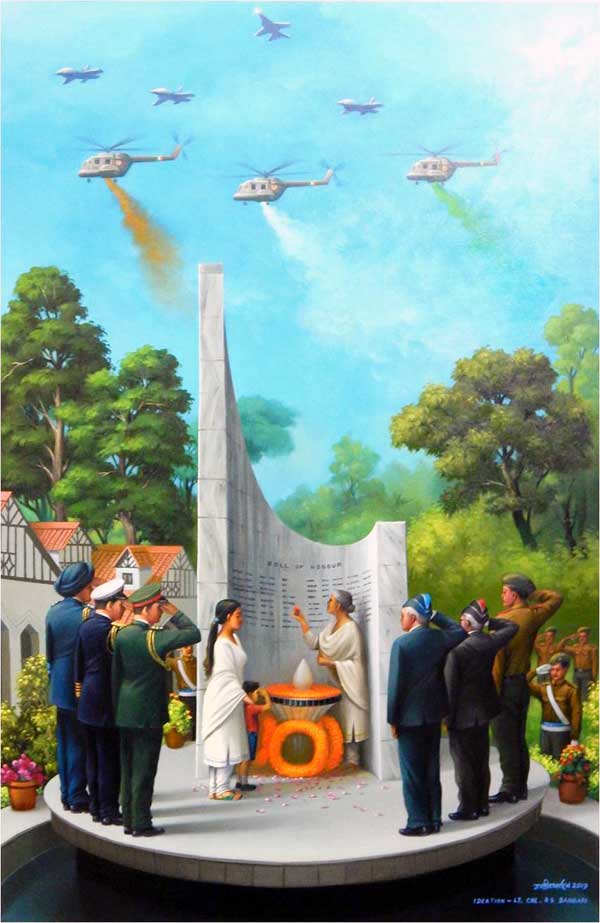 “Remembrance at the War-Memorial” is sculpted to be a “visual experience” to share some common human emotions rising upon encountering tremendous personal grief and loss, and the consequent struggle to overcome with hope for a better future. It began to take shape from a particularly poignant moment during the War-Memorial ceremony at the Rimcollians’[1] get-together in 2016; one of those moments when you happen to be at a place at just that time. I consciously use the term “visual experience” here to denote that it goes beyond merely being a painting in the manner it communicates with us viewers.

My wife, Vandana, and I were attending the annual Rimcollians’ Reunion together for the first time and after the War-memorial ceremony—an annual homage to our martyrs—we hung around there meeting with some young cadets, while we waited for the rush to clear from the War-memorial itself, so that I could show her this important monument to our dear departed at close range. When we reached there once most others had moved away, we took our places behind one last group of people who seemed to be solemnly standing there. It was very quiet.

And, then, I noticed two ladies closer up to the memorial, eyes scanning the names etched on the memorial’s inner wall. Names, with each of them holding a torrent of memories back against them; much of which a casual visitor will never know or experience. The elderly of the two now raising her right hand over a name in front of her, holding flowers delicately between her fingers and touching them to that name, as if trying to send her love and unspoken words, and more, across to her child, as it struck me now.

The young wife of the martyr, now just that name in front, besides, of course, many memories, stood by with her infant child held in her arms. The name of the martyr on the wall: “Maj. Dhruv Yadav, 75 Armd. Regt., 22 Sept. 2015”.Other close family members stood by, sharing together these very personal moments of grief.

I already had my camera in my hands and could not stop myself from taking a few pictures, even though, I was by now feeling quite out of place there—almost like intruding into someone’s personal space during such an emotional moment.

Flowers lightly crushed against the young martyr’s name; and a moment of reflection later, the mother almost willed herself away from her brief private comforting moments with her child—now gone. So also, for the others there. No words spoken, as they quietly moved away from the memorial’s wall and huddled close together, before moving to get on with their lives; what-we-all-have-come-for in this world.

The thought of sharing this encounter and its everlasting impression through a painting capturing these touching moments emerged from a desire to pay a tribute to this sacrifice by the near and dear ones of our martyrs, whose pain we can never truly feel. From this, began a process of ideating and sketching the layout of the scene with its core intact—situating that moment of remembrance in a somewhat broader context.

In a manner, I simply enlarged the circles around the core, adding the War-memorial ceremony as backdrop to this private space of remembrance, alluding to homage paid by the alma mater to one’s own. We see the trainee cadets, instructional staff, serving officers from different services and retired seniors in an outside circle, saluting the martyr and commiserating with the martyr’s family in its hour of grief;and, paying their respect to the near and dear ones for their personal sacrifice.

The circle widens further to encompass the three services as depicted by the helicopters in a fly-past, dropping flowers from the top—choreographed to signify the national tricolour, as a nation’s tribute to its brave son or  daughter. Finally, we can also see higher up in the skies, in a traditional aerial salute, fighter-pilot colleagues bidding adieu to their comrade-in-arms through a missing-man formation flypast.

The scene that unfolds here is an imagined one; almost surreal in experience. It juxtaposes immensely private moments with the public, yet maintaining a quiet, resolute dignity in backdrop of an unspoken camaraderie. I have taken creative liberty to articulate a scenario that brings together various actors in remembrance of a martyr—his family, his colleagues and others that have stood for the same values.

It is wishfully both a tribute to the act of doing one’s duty and thanksgiving of the grateful to those who must now bear the greatest impact of the passing away of these heroes—simple, honest, duty-conscious men and women—from our midst. May we never forget the sacrifices that they make on a daily basis!

This representation, however, should not be taken to be a militaristic (in the sense of jingoism) depiction of farewell to a fallen comrade; contrarily, it seeks to bring out the human side of this constant strife for a better world for the good of the common citizens. The grief of the close family is palpable. The young wife of the martyr stands there with her little boy (or, it could be a girl) next to her, holding him at his shoulders while the young child gives a salute to his father’s memory, unaware of the power games in distant lands.

The martyr’s parents express their grief in their own ways—the mother clutches on to those flowers, wishing them her son’s way, while the father, once in uniform and now retired, stands a little behind—almost stoic, along with other service colleagues.

Soon, the fighter aircrafts and the helicopters above would have disappeared beyond the horizon, the flowers now streaming through the air would have fallen amidst the gathering, the bugle would have been sounded and the salutes done. It would be time to move onto other tasks that await each of us. Hopefully, the fragrance of this experience will linger on in our memories and we shall dedicate ourselves to our duty and our cherished values to strive to leave behind a better world.

From the emergence of the concept behind this visual narrative to actually giving it a shape, even as I was sketching out initial rough ideas, I first identified an artist to work with. Rajib Gain from West Bengal is someone whose work I have liked and had also worked with earlier to give shape to a painting showing Gurudev and Gandhi conversing during their last meeting in Shanti Niketan in 1940. For this, we first worked on a smaller version of this scenario, using traditional colour-wash technique.

Thereafter, based on some discussion with and feedback from Wg. Cdr. Rajvir Yadav and Mrs. Shalini Yadav (parents of Late Maj. Dhruv Yadav), we worked on the final version that is here. To take the viewers through this process, I am sharing a few of the sketches and interim work as we communicated over distance and some language and other issues to refine the work, in line with what had been conceptualized.

As can be seen, the scope of the visual narrative is expanded and some new ideas introduced over successive iterations. Rajib chose to do this final one in oil on a larger canvas, in line with the new concept. We dedicate this effort towards keeping the memories of our martyrs alive, as a thanksgiving to their valour and sacrifice, as also of their beloved families and near and dear ones. It would bring us immense satisfaction if this visual narrative is able to communicate this sense to you, the viewers, and our countrymen. 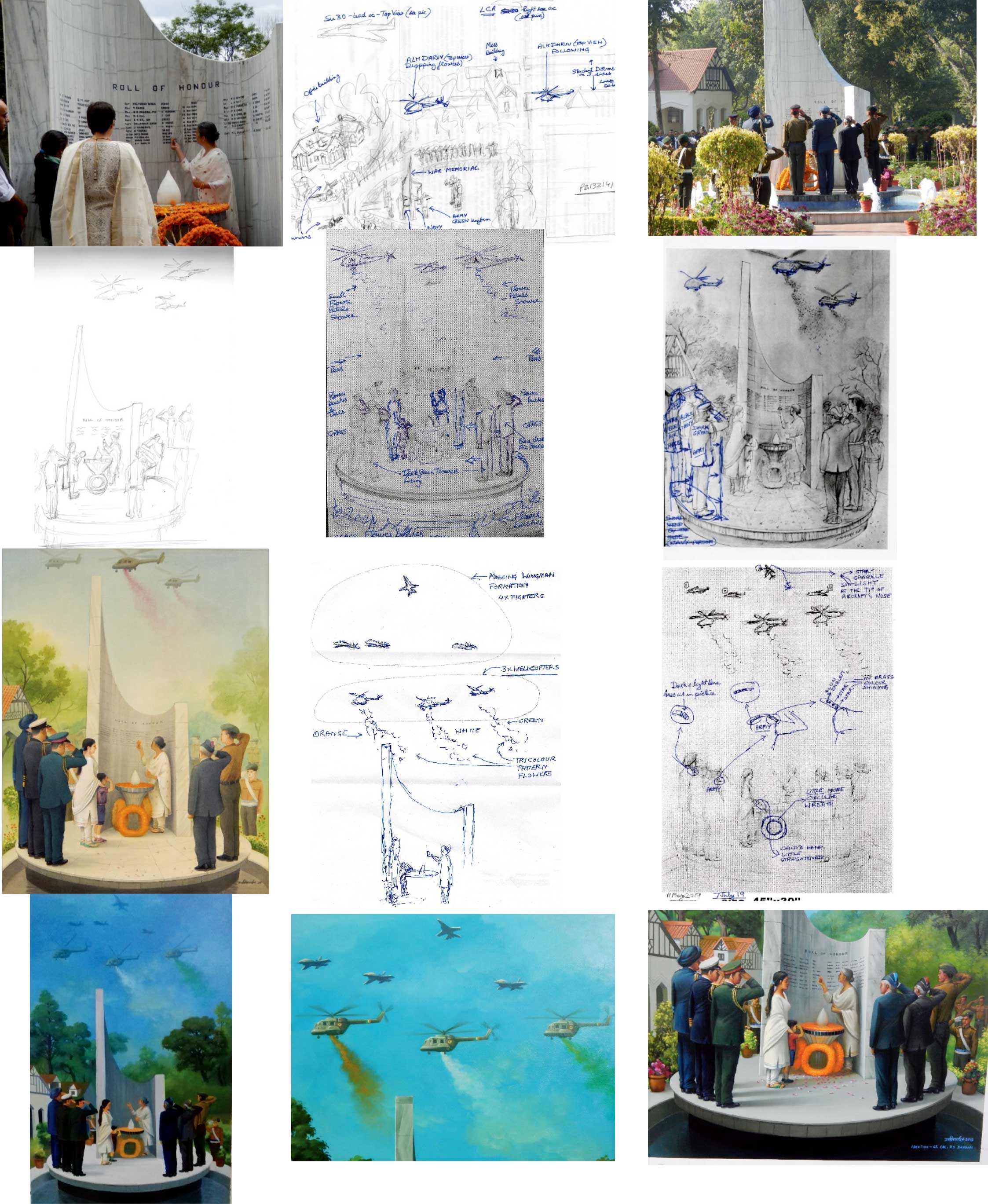