On the Plausibility of a Military Response to Pakistan-Backed Terror

Mihir Shah is a mechanical engineer who writes on military and aerospace issues. He has previously contributed to LiveFist Defence, Swarajya Magazine, and Newslaundry. 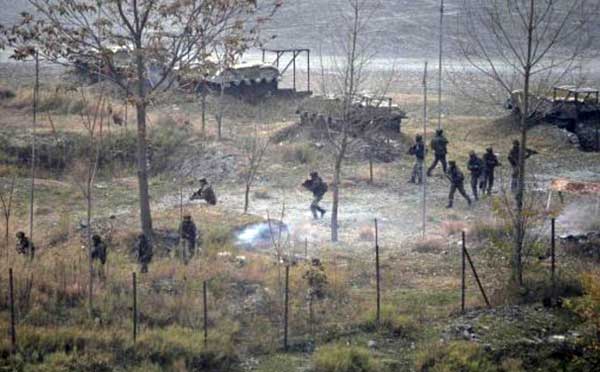 Pakistan’s possession of nuclear weaponry should not prevent India from considering offensive action in response to a terrorist attack.

“But Pakistan is a nuclear weapon state.”It’s almost an incantation—invoked to strike down any talk of military retaliation against the Pakistani military-jihadi complex[1] for perpetrating acts of terrorism against India. It is backed by a powerful-sounding argument, which proclaims that any such action on India’s part would be madness, for it runs the risk of it snowballing into an all-out war that ultimately culminates in a nuclear holocaust.

This assessment has its roots in the events of Operation Parakram[2]—the 2001-2002 India-Pakistan standoff that saw threats of a nuclear exchange[3] forcing India to back down without achieving anything concrete. Thereafter, Pakistan’s rapid nuclear build-up[4], coupled with its perceived willingness[5] to use nuclear weapons to blunt an Indian attack has led many commentators to conclude that has completely nullified[6] India’s advantage in conventional strength. The implication is that India can no longer respond to Pakistani provocations with force. That the only way forward is dialogue with Pakistan or a concerted diplomatic effort to build a global consensus against Pakistan’s use of terrorism as a state policy.

While this proposition certainly holds true under a very narrow range of conditions, to say that it precludes the military option altogether is false. To understand why, it is important to recognise that Pakistan is not the irrational, suicidal state[7] that many observers believe it to be. Its past history demonstrates that it is a fundamentally rational actor, albeit one prone to strategic overreach. Like any rational actor, it would never seek to instigate a conflict that puts its own existence at risk. Its political and military leadership certainly wouldn’t set off a nuclear exchange with India at whim. This would change only if it were forced into a situation that threatened its existence[8]. Under such circumstances, its leadership would be expected to exercise every option at its disposal to either defeat that threat or severely damage it even as the nation plunges towards its own destruction. The heightened nuclear tensions that accompanied Exercise Brasstacks[9] and Operation Parakram[10] exemplify this paradigm rather starkly.

On the other hand, if India were to limit the extent of potential hostilities to a smaller scale, it could effectively neutralise Pakistan’s casus belli for nuclear brinkmanship. Two episodes from recent history—both involving actual combat instead of mere posturing—illustrate why.

In 1999, Pakistani soldiers, initially disguised as irregulars, crossed the Line of Control (LoC) and occupied key Indian positions in the Kargil sector. The Indian government, unable to force a Pakistani withdrawal through the proportionate use of force, escalated the skirmishes to a larger border war. It pressed large numbers of troops into direct combat, subjected enemy positions to heavy artillery barrages, and ultimately launched air strikes against enemy strongholds and supply nodes.

Had the Pakistani leadership been truly as irrational and pugnacious as it portrays, it could have chosen to spread the war to other sectors, or even ratcheted up nuclear tensions to force a ceasefire that left it in a favourable position. Instead, it actively sought to de-escalate hostilities; first by eschewing the use of air power to counter India’s aerial dominance, and then by seeking US diplomatic intervention[11] to bring an end to the fighting.

The Pakistani response was largely driven by the Indian government’s decision to confine the conflict to a limited sector and keep Indian forces on the Indian side of the Line of Control. Often derided as “weak”, it was a calculated gambit that helped achieve two outcomes. One, it painted Pakistan as the aggressor and allowed India to retain control over the public narrative. Two, it granted the Indian military the freedom to undertake all manner of offensive operations on the Indian side and within a limited distance into no man’s land without holding back.

The second event occurred barely two weeks after the war officially ended. In August 1999, the Indian leadership proceeded to further escalate already heightened tensions: it authorised the Indian Air Force to shoot down[12]a Pakistan Navy aircraft that violated Indian airspace over Gujarat. It was an uncharacteristically aggressive move on India’s part, though it was couched as a defensive one. Once again, Pakistani bellicosity was conspicuous by its absence. Instead of upping the ante through retaliatory action, Pakistan opted to take the matter to the International Court of Justice, seeking compensation for its loss from India.

These experiences reveal a broad range of opportunities for limited military retaliation against Pakistan that don’t threaten the survival of the state and its administration, and avoid crossing any nuclear redlines. One option is surgical Special Forces raids targeting terrorist infrastructure and key personnel. Another is the use of artillery fire to destroy Pakistani Army installations, terrorist launch pads, and logistics infrastructure across the border. Yet another would be small-scale air and missile strikes to hit targets deeper inside Pakistan.

Of these, the second strikes the right balance between effectiveness and escalatory potential. Additionally, a multitude of modern technologies[13] allow artillery to operate with a flexibility that was impossible in the past. These include precision-guided shells and rockets; long-range projectiles; a variety of munition types; counter-battery radars; drones for target acquisition, real-time engagement, and battle-damage assessment; and many more. Such technologies now allow artillery fire to be precisely tailored to achieve desired military outcomes without having a single soldier cross the border. The Indian Army has first-hand experience with such offensives. It used increased cross-border fire to inflict heavy casualties on the Pakistani side in September 2014[14], and could do so again.

None of these actions are likely to invite an immediate nuclear response from Pakistan. They may, however, invite a conventional riposte, possibly of a similar nature. But this is where the Indian armed forces could leverage their superior firepower, technology, and staying power to keep Pakistan on the back foot. It shall also allow India to stay firmly in control of the escalation ladder, as it did during the Kargil War.

The Modi government has already shown its resolve by pursuing terrorists into Myanmar[15]. Moreover, India’s military modernisation has equipped it with a wide range of military capabilities that would allow the nation to calibrate its response to Pakistan-backed terror without inviting a nuclear attack in return. Carefully applied, these capabilities might enable India to extract a price for terrorist violence that crosses a certain threshold, deter future attacks, and more importantly, pave the way for peace on India’s terms.