Italy goes back on its word 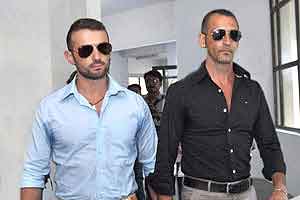 The latest turn of events in the Italian marines case is most unfortunate for both India and Italy as the bilateral relationship is being put under serious strain. The Indian side had greater reason to feel aggrieved by the cause of the crisis. Indian nationals were killed near the Indian coast, plainly without justification, by Italian marines.

For the marines to believe that Somali pirates operate near the Kerala coast shows their limited awareness of the geographical reality of threats against which they were supposed to defend the Italian cargo ship. That they killed so readily showed the inadequacy of their training in dealing with suspected piracy situations.

The marines being in Indian custody, it was inevitable that there would be pressure on the government to bring them to justice in India.

The Italians argued from the beginning that the marines being Italian naval personnel, India had no jurisdiction over them. If an Italian warship were involved, international law would have upheld Italy’s position. However, there is no clarity in international law about the sovereign immunity of military personnel deployed on commercial vessels because such vessels, unlike military vessels, have no sovereign immunity.

It was unrealistic on Italy’s part to expect that India would simply hand over the marines to the Italian authorities and lose control over the judicial process to bring them to justice.

For India, it was for its courts to determine whether it would have jurisdiction over a crime committed against Indian nationals in the contiguous zone and whether naval personnel deployed on Italian cargo vessels under Italian law for protection against acts of piracy were entitled to sovereign immunity. These issues could not be decided purely at the diplomatic level.

India is considering retaliatory options should the marines not return by the due date. The Ambassador could be declared persona non grata and all high-level official contacts could be frozen.

Other developments have been favourable for Italy, in that the case was moved out of Kerala to the Supreme Court. The Indian side showed abnormal consideration for the marines, allowing them to join their families for Christmas on the basis of the Italian Ambassador’s affidavit guaranteeing their return. The marines were allowed to go home again in February, again on the basis of a similar affidavit by the Italian Ambassador. The Supreme Court’s generosity may have been intended to placate the agitated public opinion in Italy by treating the marines humanely. The India-Italy agreement on the exchange of prisoners also opened the possibility of transferring the marines to Italy to serve their prison sentence after conviction here.

The Italian government has suddenly escalated matters by reneging on the Ambassador’s affidavit. That a major European power, a law-abiding democracy believing in the rule of law and sanctity of accords between countries, should so flagrantly disregard its own solemn commitment to a friendly country and show contempt for its highest court is unprecedented. That it ceded to domestic pressure is neither here nor there, as India too has to contend with public opinion, and, on top of that, with the ignominy now of being treated in such a cavalier manner.

Italy’s explanantion that there is now an international dispute with India and that it is open to a solution through arbitration is doubly injurious as it presents India with a fait accompli, asks India to reject the finding of its own Supreme Court and indirectly endorse the legitimacy of the Italian government’s step. The Italian Ambassador’s second affidavit seems, with hindsight, a cynical ruse to get the marines out.

The fact that the marines were received on return by the Italian Prime Minister shows that they are not being seen as criminals but heroes who have escaped Indian persecution.

The Indian Prime Minister is right in describing the Italian decision as unacceptable and has warned of consequences if the marines are not returned. His statement that Italy has violated every rule of diplomatic discourse has called into question the solemn commitments given by an accredited representative of its government and that bilateral relationships have to work on the basis of trust is entirely to the point.

…the only option for the government would be to declare him (Ambassador) a persona non grata and expel him. Italy may actually be ready for this.

India is considering retaliatory options should the marines not return by the due date. The Ambassador could be declared persona non grata and all high-level official contacts could be frozen. Besides the repercussions on the Augusta Westland case, business relations will be affected by the downturn in bilateral relations.

The Italian government would have weighed all possible Indian reactions while taking its highly provocative decision. It is apparently not overly concerned about the consequences.

The court cannot physically prevent the Ambassador from leaving the country should he choose to do so, as this will be violative of the Convention. If he refuses to explain to the court the Italian government’s position on the ground that he is not subject to its jurisdiction and attempts to leave the country, the only option for the government would be to declare him a persona non grata and expel him. Italy may actually be ready for this.

It is most unfortunate that the Italian government has provoked this unnecessary crisis.

3 thoughts on “Italy goes back on its word”