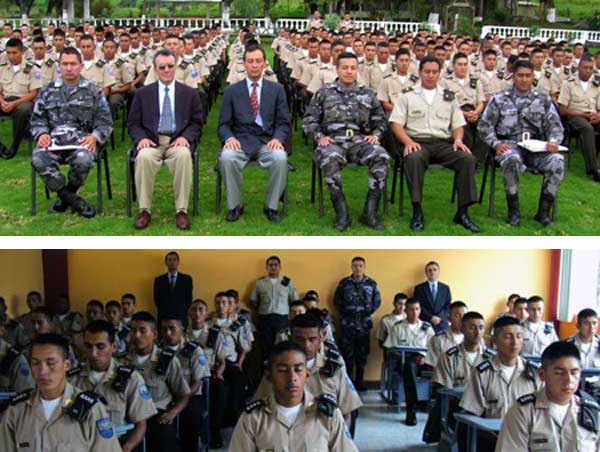 Dmbarrassed, her face turned red as she quickly left the room with all eyes upon her, valiantly attempting to keep up with CPT MacGregor who was already twenty feet ahead of her. She thought: “My God, what could I have done wrong to provoke this disconcerting response? Whatever it is, what a shame, so close to graduation,” she thought. As they were running down the stairs towards his office she asked him: “What’s going on?” He tersely replied: “Classified.” Nothing else was said until they arrived at the Commandant’s office and the door was tightly closed.

No pleasantries were exchanged, the Commandant MG Hyun got right down to business immediately. COL Torres looked at final USAWC Program Research Paper advisor Prof. James Lynch with a look of puzzlement that implied “What’s wrong.” He nodded in acknowledgement but said nothing. MG Hyun pointed to the live video screen and briefly introduced the key members of the ongoing classified teleconference, which included Directors of the CIA, DIA, NSA, members of the National Security Council (including the Joint Chief of Staff) and the US President Rachel Goldstein.

MG Hyun spoke: “The President and Directors of all of these organizations have questions for you. Computer searches of your military records as well as Internet searches have revealed that you attended Maharishi University of Management,[17] and participated in Yogic Flying.[18] Is this true?” “Yes, sir, it is,” she replied. “Please elaborate,” said the general.

“As part of my academic studies I learned this advanced meditation technique as well as others. I practiced it together with other students in a large group in a class every day called “Collective Research into Consciousness.” “Sir,” she asked, “May I please ask what this about, so I can better answer any further questions.”

MG Hyun paused for a moment, thinking ‘to save time I better go right to top.’ “Madam President, do we have your permission to show COL Torres the classified video and quickly brief her regarding this situation?” “Yes,” the POTUS replied, “but be brief, we’re running out of time.”

As the video ran, the CIA chief explained that an operative secretly recorded it at an Ecuadoran military base. Their security forces meditated close together, in the cross-legged lotus position. Suddenly, many simultaneously hopped high into air, like popcorn kernels popping at the same time. Several hovered for several seconds.

With an astonished look COL Torres exclaimed: “They have broken the hovering barrier!” “What do you mean?” asked the NSA chief. COL Torres replied, “The Yoga Sutras of Patanjali describes three stages of yogic flying. First, hopping: the body shakes and hops like a frog. The next level is hovering: the body rises up and floats in the air as you have seen in this video. The third level is flying: the body flies through the air at will.[19] This is described as ‘mastery of the skies’.”

COL Torres continued, “I was a finalist in the Yogic Flying Competition. However, as good as I was, I have not yet hovered. This feat has tremendous ramifications for mankind.”

“The President of Ecuador agrees” said the DIA chief. “He called an international press conference tomorrow morning to announce their breakthrough. We secretly obtained a draft of his speech. We are concerned about what he will say.”

The CIA chief added, “This situation parallels Russia launching Sputnik. It will be embarrassing to the US.” The POTUS agreed, saying “I will take prompt action by calling on Congress to vote for immediate funding for a Department of Defense program so our military owns the domain of ‘Inner Space.’[20] They must become ‘Inner Space’ experts who harness all of its possibilities.”

The POTUS continued, “Tomorrow afternoon I will deliver a speech before a joint session of Congress to inform them that the United States must win ‘The Race for Inner Space’ just as we won the race for outer space by beating the Russians to the moon. According to my briefings, our military personnel must quickly learn to contact the inner space of the unified field to maintain our military superiority and competitive advantage. They must quickly learn to manipulate the unified field of pure nothingness, as Ecuador’s hovering Yogic Flyers prove that even nothing is really something in the quantum world.”[21]

COL Torres asked, “Madam President, if I may humbly ask, what does this have to do with me? The POTUS replied, “My speech is scheduled, but it is not written yet. I have no cohesive plan to achieve this goal. I spoke with your Master’s degree paper advisor. He and other faculty members concur that your paper presents an intelligent plan to harness the full potential of Yogic Flying to defend our country by creating victory BEFORE war by preventing enemies from arising.”

“Please come to the White House immediately to help write my speech. After my talk, you will give a non-classified presentation about your plan to the press.”

COL Torres, ever practical, replied, “Madam President, I will be honored to help you, but afterwards I want to return to Carlisle Barracks to graduate with my class,” “My apologies,” said the POTUS, “but you will not be returning to Carlisle. Major General Hyun, can you arrange for Colonel Torres to graduate immediately from the Army War College? I want to mention her distinguished accomplishment in my speech.” “Yes, Madam President; you can also mention she graduated summa sum laudeand already lives up to the USAWC Vision statement of “Our graduates will be highly valued, respected and in demand.”[22]

The POTUS replied: “Major General Hyun, it is important for her to experience a rite of passage marking her graduation with honors. Please quickly arrange a short graduation ceremony combined with her promotion ceremony. By direct executive presidential order I am promoting Colonel Torres to the rank of Major General. She is ordered to assume the duties of commanding a military unit of Yogic Flyers, which she will form immediately.

After hearing this, The Chairman of the Joint Chiefs of Staff said: “I am not sure of the legality of your request; this will take some time to research. Won’t Congress have to approve this?” The President responded, “Surely you agree that this is an extraordinary situation which demands extraordinary measures? You have seen the movie “Patton?” “Uh…yes,” the Chairman responded, “several times.” The President replied: “Remember the scene where General Omar N. Bradley frowns as Patton is pinning on his third star and says, ‘What’s the matter, Brad? I’ve been nominated by the president.’ And Bradley replied, ‘I know… but it doesn’t become official until it’s been approved by the Senate.’ Patton wisely answered, ‘Well, they have their schedule and I have mine.’ Well, we must all be wise and everyone’s schedule must be expedited, because tomorrow afternoon the American people will demand answers why were not the first to deploy a defense system that, paraphrasing from the Star Wars movies, is ‘more powerful than we can possibly imagine’.”

“I understand, Madam President,” the Chairman replied. “The promotion ceremony will take place immediately at the Army War College, as you have requested, and if you so further order, I will quietly brief and elicit influential members of Congress to make sure there are no obstacles to your request.”

Late that night, after arriving at the White House and reading the current draft of the President’s speech, MG Torres intuitively knew that she, the POTUS and her writing team would not have enough time to come up with a cogent and creative speech that would stand the test of time. She said to the President, “Sun Tzu’s Art of War advises when weak, appear strong. We are tired and time is of the essence. Tomorrow when you address Congress as Commander-in-Chief, the American people as well the whole world must see you rested and powerfully full of vigor. In 1961, President Kennedy gave a tremendously successful and nearly perfect speech. It united our great country and inspired us to win the race for outer space. Let’s paraphrase President Kennedy’s time-tested stern logic, clear connections and utter simplicity to inspire our country to win the race for inner space.

We can utilize the historical legacy of President Kennedy’s “Camelot” by updating his urgent call to action. In your speech you could compare his situation with our current situation. Then paraphrase his still relevant words as follows:

Recognizing the head start obtained by the security forces of Ecuador with their large groups of Yogic Flyers which gives them many months of lead-time, and recognizing the likelihood that they will exploit this lead for some time to come in still more impressive successes, we nevertheless are required to make new efforts on our own. For while we cannot guarantee that we shall one day be first, we can guarantee that any failure to make this effort will make us last.

We take an additional risk by making it in full view of the world; this very risk enhances our stature when we are successful. But this is not merely a race. This is an exciting and historical opportunity! Inner space, the unified field of all the laws of nature, is open to us now; and our eagerness to share its meaning is not governed by the efforts of others. We must master inner space because whatever mankind must undertake, free men must fully share.

First, I believe that this nation should commit itself to achieving the goal, before this decade is out, of achieving the third stage of Yogic Flying–mastery of the skies. No single project in this period will be more impressive to mankind, or more important for creating lasting world peace; and unlike the race for space 75 years ago, will be so much easier and less expensive to accomplish.

Certainly we will salute the success of our military personnel who first make these daring flights. But in a very real sense, it will not be just our military members mastering the skies–if we make this judgment affirmatively–it will be our entire nation. For all of us must collectively desire to put them there.

The POTUS voiced her approval and the next morning they put the finishing touches on her speech as they watched the international press conference by the President of Ecuador. As predicted by the US intelligence leaders the previous day, the world was astounded. The incredible live Yogic Flying demonstration of Ecuadoran warriors constantly played over and over on the world’s news services.