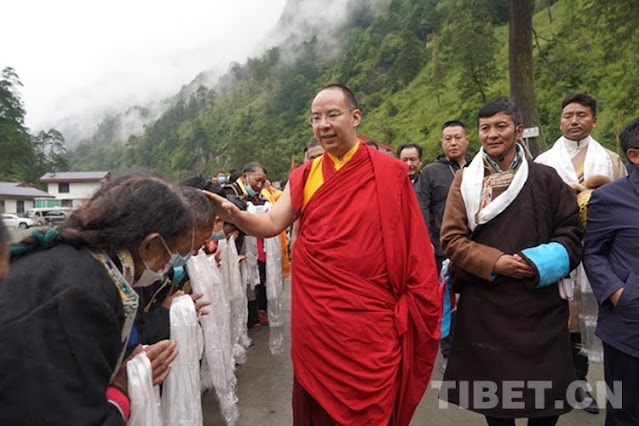 On July 22, China Tibet Network posted an article announcing that the Chinese-selected Panchen Lama (Gyaltsen Norbu) visited a village on the Indian border: “Panchen: Guarding the border is a great cause,” was the title of the article.

It mentioned the name of a 71-year-old Tibetan lady “wearing new clothes, wearing new hats and holding white khatas eagerly waiting, with faithful masses, in the fine rain,” for the arrival of the Lama

The name of the village as given by the article is Lowa.

It is probably a Tibetan translation for Lho(pa)-wa, i.e. Lhopa tribe village.

But the newly-built village is in fact Longju, the site of the first bloody clash between India and China in August 1959.

For decades, India has considered the place, where the new village is located, to be in Upper Subansiri district of Arunachal Pradesh and not in Tsari Township of Lhuntse county in Lhoka prefecture as mentioned by the Chinese.

“Knowing that Panchen Rinpoche was today going to visit our village for inspection, we waited at the entrance of the village early in the morning, looking forward to seeing Rinpoche as early as possible,” said the lady.

The narrative continued: “The new village lying quietly at the foot of the Himalayas became lively with a strong smell of mulberry smoke in the air; the masses of believers welcomed him, bowed and prayed.”

Wang Shu [Wangchuk], the secretary of the Party Branch of the new village gave an introduction to the Panchen Lama about the situation in the new village.

According to China Tibet Network, the new village is located on the border at 2,735 meters above sea level, 7 kilometers from the seat of the township government (Tsari/Migytun): “in the village, two-story small buildings are lined up, staggered and greenery is found in front of each house with flowers in full bloom, a vibrant scene.”

The article admitted that the ‘Lowa’ new village is part of the ‘relocation’ scheme and new inhabitants arrived on January 15, 2021. Since then, more than 90 families have moved in.

The village Party Branch Secretary showed the Panchen Lama around and explained the construction of the new village on an exhibition board showing the new village’s relocation; the role of the villagers, living in well-off houses, who have to guard the border and improve the rural revitalization conditions as well as the industrial and ecological development of the area.

The local Party Secretary added: “In addition to the high standard construction of well-off houses, the Party and the government also invested in the supply of water, electricity, telecommunications and other infrastructure facilities as well as the construction roads. It is supporting the construction of bamboo processing plant, Tibetan incense plant, greenhouses and other special industries.”

Gyaltsen Norbu asked: “How many children do you have? Where do the children go to school? Where are the teachers from?”

He later went into the first floor of the Village Committee House and visited two households “to talk to the masses of relocated households to understand their living situation after relocation.”

“Going around the village, you can see that our current housing, living and other conditions which are particularly good,” said the villagers.

The Panchen Lama looked at the happy smile on the face of the border people and told that they were different from others; your tasks to guard the border: “it is a great cause, you should feel the Party’s grace, listen to the Party, follow the Party, to do a good job in the new era of garrison people, continue to work hard to guard the territory of the motherland. I believe your future life will be even better.”

The article mentioned that in 2021, the per capita disposable income of the new village of Lowa reached 25,804.08 yuan. It is pure propaganda as the village did not exist a few months earlier.

But in 2022, the villagers’ income has doubled and more prosperous days are ahead, said one of the villagers while guarding the border is not only “our unshirkable responsibility, but also our glory, we firmly believe that under the wise leadership of the Party and the State, the new village of Lowa will have a better tomorrow.”

No photos of the Dalai Lama, of course.

The article concluded that after receiving the blessing from Panchen Lama, “still many religious people who did not want to leave for a long time.”

One of the villagers said: “I didn’t expect Rinpoche to travel so far to visit us in the village. Before, I had only occasionally seen Rinpoche on TV, but I never thought I could see him with my own eyes in this life.”

With tears in her eyes, the old lady immediately enshrined the picture of Lama on the altar of her house after returning home.

Probably along with the photo with Xi Jinping.

It is pure propaganda to show that Longju belongs to China, and the Tibetans are given the freedom to practice their religion, but where are the stupa, the gompas, the prayer flags, the prayer mills in the new villages.

Nowhere, but is clearly a provocation in retaliation against the Dalai Lama’s visit to Ladakh.

But a poor retaliation, for the Dalai Lama there was a 10-km line-up in Leh, in Longju hardly 20 people, representing the ‘masses’.