The famous conversation between the defeated King Porus and the victorious King Alexander after the battle of Hydaspes (Jhelum) river is known to most school going children and history students. The conversation went something like this-

Alexander — How would you like to be treated?
Porus – Treat me as a King would treat another King!

We are told that Alexander was so happy with the reply of the vanquished king that he returned Porus his Kingdom. And since by that time, the Macedonian soldiers were on the verge of mutiny, Alexander was forced to go back home after advancing a little further, upto the Eastern banks of the Hyphasis (Beas) river.

Whether this conversation between the Macedonian King and Porus took place, cannot really be verified. But what is indisputable is that Alexander did make a foray into India. The two cities founded by him, Nicaea (Greek for Victory) and Alexandria Bucephalus, to honour his favourite horse, still exist in what is now Pakistan.

We also know that Gandhara city conquered by Alexander in 327 BC is known for its Greco-Buddhist sites which are an obvious result of Alexander’s invasion. In addition, there also exist many known statues of Buddha robed in Greek fashion. Enough evidence exists in the subcontinent as well as in Greece about Alexander’s march to India. An interesting aspect, though not confirmed by any scientific evidence or authentic records, pertains to the Kalash tribe in Northern Pakistan and the inhabitants of Malana, a cluster of 12 villages in Himachal Pradesh, who claim to be of Greek ancestry!

A lot Greek literature on the battle of Hydapses/Jhelum is available. It is recorded history that after defeating Porus, Alexander marched on to the next river, Hypasis (Beas), near Gurdaspur. It was somewhere here, after meeting resistance from his soldiers, that Alexander ended his campaign. There are five surviving written sources that provide us with most of our information on Alexander the Great’s campaigns including the battle of the Jhelum. Even these are secondary sources, no primary source has been ever recorded. Of these, the source that is generally considered the most reliable is the Anabasis of Alexander, written by the Greek historian Arrianos of Nikomedia. It should be noted that all these five chronicles rely on earlier writings of which there is no record as such. Possibly, the contents of these five surviving sources are derived from the accounts of other writers and officials who had written about Alexander’s conquests. Another important source is the Greek historian Megasthenes (lived c. 350 – c. 290 BCE), who served as an ambassador of Seleukos I Nikator to Chandragupta Maurya, and who wrote a history of India titled ‘Indika’, which has been used extensively as a source by some of these five ancient writers, including Arrianos and Diodoros Sikeliotes.

Indian history has very few records pertaining to Alexander’s foray to India. Whatever exists or what we have learnt or read in the sub-continents history books, has mostly been borrowed from Greek/European sources. Some Indian literature does mention that the ‘Yavanas’ in Mahabharat and Purana’s actually allude to the Greeks. This may or may not be true. Alexanders invasion is dated 326 BCE, the Mahabharat was written sometime between 400 BCE and 200 CE and the Purana’s in written form came into existence hundreds of years after Alexander’s invasion. References of Alexander’s invasion in these texts too, are from secondary sources and hearsay.

Many years back while leafing through a brochure of Station HQ Tibri (a military cantonment astride the River Beas and about 8 KMs from Gurdaspur), I came across a mysterious and interesting paragraph stating that there is a connection of the name ‘Tibri’ with the Greek word ‘Tibor’. It was mentioned in the brochure that the Greek army had camped somewhere near present day Tibri and that the name ‘Tibri’ is courtesy the Greeks. There is no supporting evidence for this claim and neither do we know the location, along the Beas, from where Alexander had turned back. And where are the 12 huge ‘victory altars’ which Alexander had supposedly constructed on the Beas before turning back?

The ancient Greek historian Arrian has recorded in his writings:

‘He then divided the army into brigades, which he ordered to prepare twelve
altars to equal in height the highest military towers, and to exceed them
in point of breadth, to serve as thank offerings to the gods who had led him
so far as a conqueror, and also as a memorial of his own labours.
When the altars had been constructed, he offered sacrifice upon
them with the customary rites, and celebrated a gymnastic and equestrian contest’.

No verifiable trace of these wonders has ever been found. The point here is not to really debate as to who had won the battle; or as Spencer Alexander McDaniel, a historian of some repute tells us ”the existence of an alternative version of the story in which Alexander lost the battle’’. None the less, it did surprise me when I read that Marshal Zhukov and JFC Fuller share the same viewpoint! While addressing the cadets of the Indian Military Academy, Dehra Dun in 1957, Zhukov had said that Alexander’s actions after the Battle of Hydaspes suggest he had suffered an outright defeat. In Zhukov’s view, Alexander had suffered a greater setback in India than Napoleon in Russia. In the same vein JFC Fuller (The Generalship Of Alexander The Great) casts doubt on the generally accepted outcome of the Hydapses battle.

The aim is not to ‘change or challenge’ established history, let us accept what history says– Porus was defeated by Alexander, after a hard battle. Be that as it may, what I find interesting is that there truly are certain incongruities which strike the military mind. Mainly some interesting facts and figures. We all know that over time an element of romanticism begins to overpower fact; myths get injected into actuals and ‘hundreds’ get converted into ‘thousands’. A lot of early written history is more often an exaggerated literary representation of actual events that happened long ago.

Without going into the tactical details of the battle, let us see for a moment the strength of the opposing forces. Available records tell us that Alexander’s army, at the Battle of the Hydaspes is estimated to have included around 40,000 infantry and between 5,000 to 7,000 cavalry. This army had travelled, with all its paraphernalia including soldiers, camp followers, horses, chariots, the sick and wounded, plunder, food, clothing and all the material needed to sustain an invading army — over tracks, jungles, rivers, deserts, mountain passes and hostile territories; a distance over 8000 kms. Not an easy task.

Meanwhile, Porus’s army at the Battle of the Hydaspes is estimated to have included somewhere between 20,000 and 50,000 infantry, between 2,000 and 4,000 cavalry, around 130 war elephants and around 1,000 chariots. It was, all in all, quite a massive confrontation. In the Hydapses battle, Porus not only lost one of his sons but also suffered casualties to the tune of 12,000 soldiers killed and 9,000 captured against Alexander’s loss of about a 1000 killed. So how is it that we still have no historic site of this great confrontation identified? How is it that Indian history has no mention of any cremation/burial site of thousands of these warriors killed during the battle? A point to ponder.

The Greek historian Diodorus Siculus notes that after the battle with Porus, Alexander received reinforcements at the river of more than 30,000 infantry and nearly 6,000 cavalry; also suits of armour for 25,000 infantry, and 100 ‘talents’ of medical drugs. All the way from Greece? A follow on second echelon which reached in quick time! As mentioned earlier, everything, including these reinforcements is in hundreds and thousands. History does get distorted over time.

It is chronicled that Alexander gave King Ambhi of 1000 Talents (25,000 kilos) of Gold for fighting against Porus. A simple military calculation (staff check) shows that a 545-kilogram (1200 pound) horse, would be best off carrying no more than 109 kg. That is ideal. Let us say we ‘overload’ the horse with a weight of 120 kgs. Even then to carry this load of 25,000 kg of ‘bribe’ gold, Alexander would have had to earmark a train of more than 200 horses carrying most of this gold from his start point. Over inhospitable and hostile territories, rivers, deserts and mountains. Ofcourse, this may include some booty and horses gathered from plundered territories enroute. A major logistical exercise indeed.

Alexander definitely was not a gentle or large hearted king. Egoistical, shrewd, ruthless and a brilliant military leader like many great warriors, Alexander was also known as the Accursed, the Conqueror of the World, the Philosopher-King, and the Mad-Man of Macedonia, among others names. It is recorded that Alexander had slaughtered a large portion of the population of the Phoenician city of Tyre (in what is now Lebanon) after that city fell to his forces in 332 BC. Would such a man really return his spoils and captured territory because of joy at receiving a witty answer? And after having lost a thousand of his men! Could it be that the Hydapses battle had actually resulted in a truce of sorts and not an outright victory for Alexander? 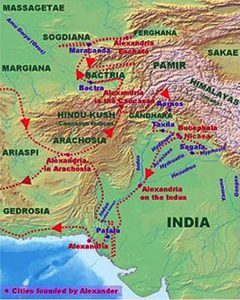 And was it really because his men were ‘tired’ of fighting and homesick and on the verge of mutiny that Alexander decided to return? As Rakesh Krishnan Simha (Alexander Versus Porus Beyond The Fog Of War; available at http://indiafacts.org/alexander-vs-porus-beyond-the-fog-of-war/) has mentioned in his article ‘imagine if German soldiers had told Hitler they were tired of fighting’! They would have been shot. And that applies to all armies even today.

Plutarch the Greek historian, does add that one of the reasons for Alexander’s decision to turn back was because of information given to him that further East, beyond the Beas, the kingdom of the Nandas “were awaiting them with 200,000 infantry, 80,000 cavalry, 8000 war chariots, and 6000 fighting elephants”. What is chronicled in history and what we know is that Alexander, after crossing the Jhelum marched on to Beas and thereafter moved down, South-West, to go back. After reaching the mouth of the Indus river he divided his army into two. One part was to leave by ships that would hug the Makran coast and sail to Babylon (modern Iraq) and the other part marched back on foot. Here ended Alexander’s foray to India.