Xi Jinping is the New Führer 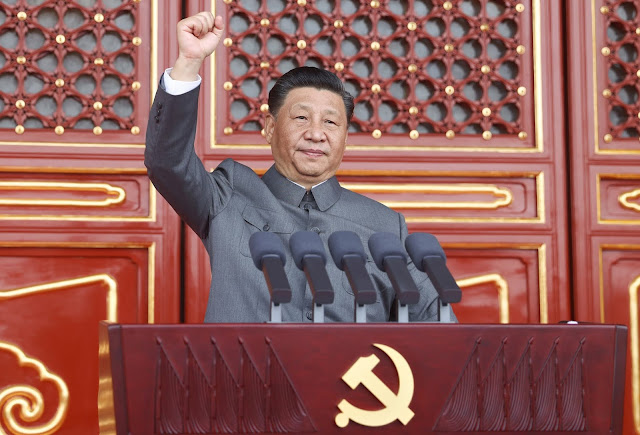 Like Hitler’s Germany, China is trying to expand its territory and influence not only in the Himalayas or in the South China Sea, but everywhere from Central Asia to Africa and South America.

“I volunteer to join the Communist Party of China, support the Party programmes, abide by the Party’s Constitution, fulfill my obligations as Party’s member, implements the Party’s decisions, strictly observe the Party’s discipline, keep the Party’s secrets, be loyal to the Party, work actively for the Party, fight for Communism during my entire life and be ready at any time to sacrifice everything for the Party and the people, and never betray the Party.”

This is the oath that tens of millions of Party cadres, soldiers and officers of the People’s Liberation Army or ordinary citizens have to take on the eve of the 100th anniversary of the Communist Party of China.

Reading this pledge, the Nazi regime in Germany comes to mind; in 1940, Sri Aurobindo, the rishi living in Pondicherry, explained his views on the ‘inner’ war going on; he had just sent a large amount (for that time) of Rs 1,000 to the War Fund to support the British government. Many of the disciples were incredulous, why support the forces that India wanted to be liberated from.

The sage explained: “Hitler and Nazism and its push towards world domination are an assault by a formidable reactionary force, a purely Asuric force, on the highest values of civilisation and their success would mean the destruction of individual liberty, national freedom, liberty of thought, liberty of life, religious and spiritual freedom in at least three continents.”

Is it not the same with a communist China today, which is trying to expand its territory and influence not only in the Himalayas or in the South China Sea, but everywhere from Central Asia to Africa and South America, imposing its views on the world?

In 1940, Sri Aurobindo observed: “If Britain were defeated, that result would be made permanent and in Asia also all the recent development such as the rise of new or renovated Asiatic peoples would be miserably undone, and India’s hope of liberty would become a dead dream of the past or a struggling dream of a far-off future… Mankind itself as a whole would be flung back into a relapse towards barbarism, a social condition and an ethics which would admit only the brute force of the master and the docile submission of the slave.” This is what happened to the Tibetans in 1950, when their country was invaded.

The victory of the British Empire was necessary for the world to evolve towards a more human, if not enlightened, state; the freedom of India emerged from this (it did two years after the end of the War).

Sri Aurobindo spoke of “a clash between two world-forces which are contending for the control of the whole future of humanity. One force seeks to destroy the past civilisation and substitute a new one; …a reversion to the old principles of dominant Force and a rigid external order and denies the established values, social, political, ethical, spiritual, altogether.”

India should keep this in mind when it negotiates with China in Ladakh or elsewhere; the present ‘battle’ is between two opposite words, particularly since the virus, which mysteriously emerged from Wuhan. India, despite having an incredible number of weaknesses and deficiencies, represents an aspiration for freedom, peace and diversity on the planet.

Today, Xi Jinping is the new ‘Führer’ (‘guide’ in German) and all Chinese people have to swear by him… if they are attached to their lives.

It is not that China has never seen hope on the horizon in the past. Take the example of Xi Zhongxun, a very progressive Vice-Premier. In the Fall of 1962, Kang Sheng, a shady character, arrived on the Chinese political stage. During the Tenth Plenum of the 8th Party’s Congress, Mao violently attacked Xi Zhongxun, accusing him of supporting the rehabilitation of Gao Gang, a Communist Party leader who had been purged in 1949. Machiavellian Kang Sheng led the charge; he announced that Xi should be ‘investigated’ for his ‘anti-party activities’.

Dr Li Zhuixi, Mao’s personal physician later wrote: “Kang Sheng›s investigations implicated more than three hundred cadres from the party, government, and military.” Dr Li continued: “I knew Xi Zhongxun well, and the charges against him and his supporters were fabricated. But Kang Sheng’s job was to depose and destroy his fellow party members.”

Subsequently, Xi Zhongxun, Xi Jinping’s father, disappeared from public view for 16 years. The foundations of the Cultural Revolution were laid. On 25 June 2021, accompanied by the members of the Politburo, Xi Jr visited Mao Zedong’s residence in Zhongnanhai in the Imperial City; Xi praised the Great Helmsman, who had sent his father to jail: “We must always maintain our red blood, use the party’s struggle history and great achievements to inspire fighting spirit and guide the direction, use the party’s glorious tradition and fine style to strengthen our beliefs, gather strength, and use the party’s historical experience,” he said.

China watcher Willy Wo-Lap Lam mentioned other cases of more liberal leaders in the last China Brief of the Jamestown Foundation: “Looking Back on Short Flashes of Liberalization in the Chinese Communist Party’s 100 Years.” He cites amongst others Deng Xiaoping’s two designated successors, Hu Yaobang and Zhao Ziyang: “Deng, Hu and Zhao spearheaded the thought liberation movement, which can be summarised by the saying ‘practice is the sole criterion of truth’… This ideological reform freed the nation from unthinkingly following the dictates of Marxism-Leninism and Mao Zedong Thought. Deng’s post-Mao political reforms included introducing village-level elections, the abolition of the personality cult, the establishment of a retirement and succession mechanism and the separation of party and government.” All these reforms have gone with the Red Wind.

In the meantime, the situation is deteriorating on India’s northern borders. Take the example of the Kyungling village, located a few kilometres north of the LAC, north of the Shi Yomi district of Arunachal Pradesh; a Chinese website says: “Party Branch earnestly studied and implemented the spirit of General Secretary Xi Jinping’s important reply to the masses of Yume Village [the first model village adopted by Xi on the border in 2017]. …Day after day and year after year, party members and the masses of Kyungling Village participated in the defense of the border, braved the wind and rain, over the snowy mountains, wandered into torrents, lived in rock caves, measured the country with their footsteps, and defended sovereignty with practical actions, …[people] are on duty building a ‘bronze wall and iron wall’ on the border.”

How long will the Tibetans be brainwashed thus? Let us hope it is not too long. In any case, India has no option but to fight the present regime in China at all levels, keeping in mind that perhaps one day, a more-enlightened regime will emerge. The planet will be so much better without a totalitarian ‘guide’ in Beijing, but Delhi should not bank on this presently.