Why start with demilitarising Siachen? 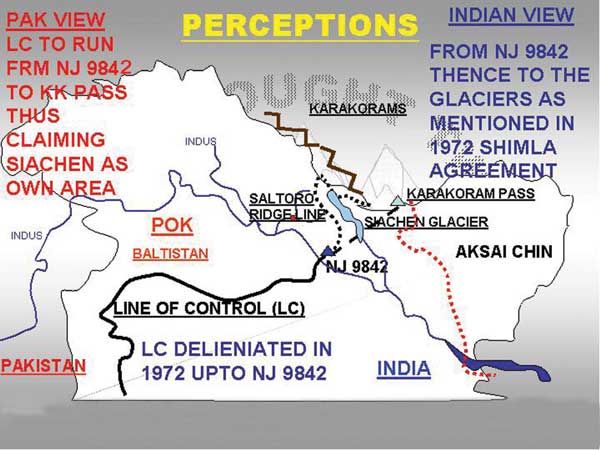 The talk of demilitarising the Siachen Glacier which was on the back burner for a long time suddenly hit centre stage after a tragic snow avalanche buried all the 140 odd personnel of the Pakistan Army in their forward base at Gayari on 7 April 2012. In a visit to the area a few days after the incident, Pakistan’s Army Chief mooted the idea of withdrawal of Indian and Pakistani troops deployed on the Saltoro Ridge. Kayani’s statement that Pakistan was ready for demilitarisation of Siachen created a buzz in political and military circles, and many well-meaning people from both sides quickly took up the refrain. There is perhaps a certain element of glamour and grandstanding involved when people talk of peaceful settlement of issues. Peace of course is of vital concern and needs no reiteration. That peace can be brought about by withdrawing troops from the Saltoro Ridge is however etched in fantasy.

The fact that India is sitting on its own territory hence makes any talk of mutual withdrawal nonsensical. A withdrawal from territory which we are holding and which we have defended from continuous Pakistani assaults will only weaken our stated position on Kashmir.

A comprehension of the geography of the place would perhaps lead to a better understanding of the ground realities. The Siachen Glacier lies between The Aksai Chin and the Nubra River. No troops are deployed on Siachen. Towards the West is the Saltoro Ridge, which lies between the Nubra and the Shyok Rivers and dominates the Siachen Glacier. Indira Col on the northern tip of the Saltoro Ridge was first reached by Colonel Narendra Kumar of the Indian Army in 1981 and he named it Indira Col. Harish Kapadia reached the same col in 1998. The col is a saddle between the Siachen Glacier to the south and the Urdok Glacier to the north, on the watershed between the Indus River Basin and the Tarim Basin. The term Indira Col has also been applied to another, higher col 2.4 km further east on the Indira Ridge. This eastern col was named Indira Col in 1912 by Bullock Workman, after one of the names of the goddess Lakshmi. The area to the north is part of the Trans Karakoram Tract, (Shaksgam Valley) illegally ceded by Pakistan to China under a 1963 border agreement between the two countries.

Post the peace accord signed in Shimla in 1972 between Mrs Indira Gandhi and Mr Bhutto, the military commanders from both India and Pakistan set about delineating and authenticating the line of control (LC) as existing between the two sides in Jammu and Kashmir according to the terms of the accord. As is well known, the delineation took place up to a point referred to as NJ 9842. Beyond this point, the two sides left the boundary unmarked and chose to describe it as, “and thence Northwards, towards the glaciers.” NJ 9842 lies on the Saltoro Ridge. Northwards hence logically means starting from NJ 9842 and thence continuing along the crest line of the Saltoro which in the instant case leads to Indira Col. That is the international convention. It cannot mean descending down to the Nubra and then going over the Siachen Glacier in a Northeast direction towards the Karakoram Pass as claimed by Pakistan. In fact, it was Pakistani attempts to force the latter interpretation by according permission to foreign mountaineering teams to the Siachen that led India to occupy the Saltoro ridge.

The fact that India is sitting on its own territory hence makes any talk of mutual withdrawal nonsensical. A withdrawal from territory which we are holding and which we have defended from continuous Pakistani assaults will only weaken our stated position on Kashmir. The political ramifications of such a move are tremendous. If Pakistan is so concerned about the security and welfare of its troops, they are welcome to withdraw from the posts held by them on the Western slopes of the Saltoro which are at lower heights. India can and should give them an assurance that it will respect the present line and not move into posts vacated by them. To ask for Indian troops to withdraw because Pakistan finds it difficult to maintain its troops post the disaster at Gayari is stretching both logic and goodwill a bit too far.

The aim (Pakistan) appears to be to link Pakistani presence and control over the glaciers with Chinese occupied Aksai Chin.

The second argument thrown about in favour of withdrawal is that the harsh conditions at Siachen have led to many health related casualties and the expense involved in maintaining troops at such heights is debilitating. This line of reasoning too is flawed. The cost of maintaining troops on the Saltoro Ridge is no more than in maintaining troops located at other similar heights by India. Then why single out only the Saltoro ridge for demilitarisation? There is no clamour for withdrawing Indian troops from the Glacier at Sub Sector West, located South of NJ 9842. Neither is there any call for withdrawing troops from Sub Sector Hanif located West of NJ 9842 on the line of control. There is a cost of maintaining troops here too. But Pakistan has no problems of maintaining its troops opposite India in these areas and so these sectors receive no mention. The talk of casualties is also flawed and not borne out by evidence. The casualties suffered on the Glaciers are no more than suffered in other high altitude areas. A lot of care and effort is taken on the acclimatisation process and many units have returned from the Glacier with a zero casualty rate. In any case, when has cost and casualties been a consideration for defending our territory?

We need to look into the larger game plan of Pakistan which seeks to take the Glaciers by guile as it has failed to do so by force. The aim appears to be to link Pakistani presence and control over the glaciers with Chinese occupied Aksai Chin. The strategic implications of such a move are obvious. Guarantees by Pakistan that it will not move into the areas vacated by India are worthless. And what would happen if Chinese troops move in? How would India respond then?

Peace is certainly a worthy cause and must be pursued but Siachen is not the start point. India can unilaterally stop the absurd drill being followed at the Wagah check post and let Pakistan do the silly goose stepping. That measure cannot backfire. We can unilaterally return Pakistani prisoners, at least the ones who have inadvertently strayed into Indian Territory or who have been apprehended fishing in Indian waters.  There are many ways to develop goodwill without risking our strategic interests. Then why start with Siachen? Demilitarisation as a process must encompass the entire border and for that Pakistan must stop acts of terror on Indian soil. Trust can be built if Pakistan closes the 42 terrorist training camps it has established to bleed India and also hand over the perpetrators of the Mumbai carnage. Anything less will not inspire confidence.

Finally, the stated position of the Indian Army that withdrawing from the Saltoro would not be in India’s interest is merely stating a military reality. Regardless of the guarantees given by Pakistan, should the Saltoro be occupied by Pakistan in contravention to any guarantees given, it would be impossible for the Indian Army to regain the feature. It is incumbent on the part of the military to give its professional opinion on military matters. This can in no way be viewed as going against government policy. The Political authority in India is supreme and can overrule military judgement based on political considerations. It must however take responsibility for its action.

4 thoughts on “Why start with demilitarising Siachen?”