The Darkness of Taliban’s Sharia 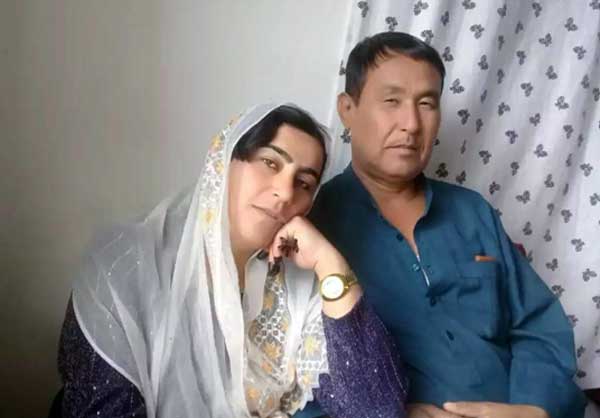 The Photo of Rajab Ibrahimi and Golandam

A Marriage Declared Null and Void

These two persons who came together and formed a family after loving unconventional and unpolluted loves, These lovers may never have imagined falling into the trap of monsters again. Mr. Rajab Ibrahimi is a Hazara Shiite, Mrs. Golandam is a Sunni Pashtun who fell in love and married 15 years ago in the “Alang Village of Dolatabad district” in the Balkh province in northern Afghanistan, and the couple has four children.

The Torture After 15 Years

Rajab Ibrahimi, 50, and Golandam, 40, are Balkh province residents in northern Afghanistan who fell in love and got married 15 years ago. On Friday, June 3, 2022, they were arrested by the Taliban in Kabul while trying to flee to Pakistan for fear of the Taliban and the Golandam family. They are currently being tortured in Taliban prison in Kabul, Afghanistan. Rajab Ibrahimi is a Hazara ethnic, and Golandam is from the Pashtun tribe and Hanafi religion.

The couple now has four children and are residents of Alang village in the Dolatabad district of Balkh province in northern Afghanistan. The couple’s relatives told local media that they got married 15 years ago, after much effort and struggle, and despite ethnic and religious differences in a country like Afghanistan. But during this time, Ms. Golandam’s relatives and brothers were constantly threatening them.

So, the Golandam brothers and father did not stop persecuting and following the couple until today. Now they found another opportunity against the couple and complained against them for honor revenge in the Taliban court, which the courts of the Taliban will not be a justice court.

From the Balkh to Kabul Prison

According to local and media reports, with the collapse of the former Afghan government and Taliban rule in Afghanistan, Rajab Ibrahimi and Golandam left their home in Mazar-e-Sharif in northern Afghanistan. They moved to Kabul to escape the Golandam brothers and father. The couple lived in secret in Kabul for the past nine months and had repeatedly tried to leave Afghanistan, But due to economic problems and not having a passport, they could not leave Afghanistan.

After the Taliban took control of Afghanistan, passport issuing to Afghan citizens became a systemic problem that people still are facing many difficulties in obtaining a passport in this country.

An informed source who witnessed the case of Rajab and Ms. Golandam in the previous Afghan government said, on condition of anonymity, that the Golandam brothers tried to arrest the couple after the collapse of the previous government because of their ties to Taliban commanders. But Rajab and Golandam were living secretly in Kabul when they were eventually arrested and imprisoned by the Taliban. They are now being tortured to death by the Taliban in Kabul prison.

“The Taliban arrested Rajab, and Golandam and their four children in the northern of Kabul city on Friday as they tried to go to Jalalabad and from there to Pakistan,” said the man, who had been in contact with Ms. Golandam until Saturday evening. According to this person, on Friday, the Taliban first took Rajab and Ms. Golandam to 3PD of Security in Kabul and then to 5PD of Security. The couple is currently being held inside 5PD of Security and is being severely tortured.

According to a video released by the Persian Independent newspaper, Golandam, her four children, and her aunt, an older woman, are trapped in a dark basement that appears to be a warehouse. The video shows Golandam’s children crying in terror, and Ms. Golandam says Taliban soldiers are severely torturing her husband in the basement.

The UNAMA’s Office Vague and Unclear Answer to This Issue

So, Sources who contacted the couple added that many efforts had been made to secure the release of Golandam and Rajab Ibrahimi, including contacting the Office of the United Nations Assistance Mission in Afghanistan (UNAMA). But UNAMA officials said they did not have access to Taliban officials or prisoners in Kabul, Afghanistan

According to relatives and media sources in Afghanistan, Golandam, Rajab, Golandam’s aunt, and their four children were detained by the Taliban in the 5th security zone of Kabul city until Monday morning, June 6, 2022. Golandam and Rajab are constantly tortured for falling in love by the Taliban.

The Man Who Introduces Himself as Golandam’s Fiancé

Currently, none of Rajab Ibrahimi’s relatives and family members have access to him or his children for fear of the Taliban. But the Golandam brothers and a man who claims to have been Golandam’s fiancé 15 years ago. The man traveled from Mazar-e-Sharif to Kabul to meet with the Taliban commanders and the head of Kabul’s 5th security zone.

The Traditional and Avenger Society

Many lovers and young people were stoned, killed, or fled to foreign countries for security reasons.Including Mohammad Ali and Zakia from Bamyan province in central Afghanistan, where Mohammad Ali is a Shia Hazara and Zakia is a Sunni Tajik who fell in love a few years ago.

The lovers were imprisoned for falling in love with Zakia’s revenge family.The case of Zakia and Mohammad Ali took place during the time of former Afghan President Hamid Karzai, when Zakia’s family, like the Golandam family, sought revenge and murder. So, Zakia’s family complained to the government, then Zakia and Ali were imprisoned by the police in Kabul city.

The couple was later released from prison with the intervention of human rights organizations, including Sima Samar, head of the Afghan Human Rights Commission, and President Hamid Karzai, and their case was transferred to the Afghanistan Attorney General’s Office. However, Zakia’s family never stopped harassing and taking revenge on Ali and Zakia.

Finally, The couple fled to the United States in 2016 to save their lives from being revenge, fired, stoned, and murdered by Zakia’s family and relatives. The New York Times report is available at this link: https://b2n.ir/www.time.ali.zakia.c

One thought on “The Darkness of Taliban’s Sharia”