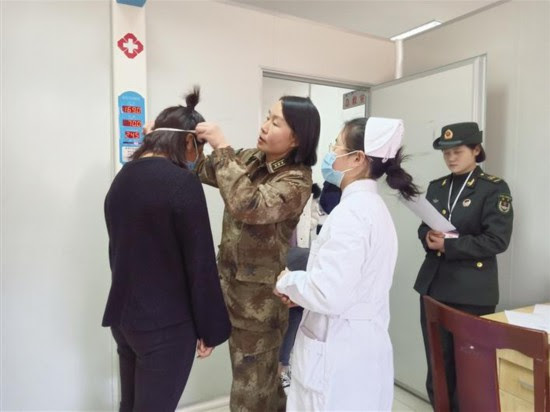 According to the website China Tibet News, many young Tibetans applied for recruitment in the Chinese Army in the first half of 2021.

This was the first post Covid-19 recruitment exercise for the People’s Liberation Army (PLA), after the confrontation with the Indian Army in Ladakh. Normally, recruitment happens twice a year all over China; Beijing is apparently trying hard to recruit Tibetans in the PLA; offering many incentives to those willing to join.

The article says: “This year is an important year for Tibet to implement biannual conscription. At present, the conscription work in Tibet has entered the final stage. As a key part of ensuring the quality of troops, the recruitment department of the Tibet Autonomous Region (TAR) attached great importance to the work of conscription medical examinations.”

On March 8, 22 young women from different prefectures in the TAR had passed the preliminary screening; once preselected, they were sent to Medical Examination Center of the General Hospital of the Tibet Military Command for further testing.

There is no doubt that ‘political’ assessment is the most important in the volatile Land of Snows.

This year, despite the conflict in Ladakh, the number of Tibetan applicants, aged 18 to 22, is said to be more than 3,800 (3,069 young men and 753 women); the exercise targets educated youth, mostly college students, most of them with degrees. Another recruitment session will take place in June/July this year.

After the fiasco in Ladakh, where the Chinese soldiers did not fare well compared to the Indian jawans (one of the reasons is the enforced military conscription in China), Beijing is seriously thinking to bring reforms and enroll more minorities like the Tibetans in the PLA (for sure, the latter are suffering less of the lack of oxygen unlike Chinese soldiers); of course, ‘ideology’ remains the crucial criteria for the final selection.

Recruitment and conscription are major issues for the PLA leadership, which has probably realized its shortcomings on the Ladakh front.

China Military Online had reported in January that a first plenum of the inter-departmental joint conference on national conscription work was held in Beijing on January 18.

It was addressed by General Wei Fenghe, Defense Minister and member of the all-powerful Central Military Commission (CMC). The Chinese media commented: “The joint conference is responsible for implementing related major decisions and deployments concerning the military conscription.”

Beijing seems to be fully aware of the recruitment deficiencies; one of them being the quasi absence of ‘minorities’ troops in the PLA.

While addressing the PLA delegation during the recently concluded Two Sessions (the Chinese People’s Political Consultative Conference or CPPCC and the National People’s Congress or NPC), President Xi Jinping noted that the PLA achieved “a good start in strengthening national defense and the armed forces during the 14th Five-Year Plan (2021-2025) period.”

Xi, also CMC chairman praised the armed forces “for reaching the targets and missions for 2020 amid the COVID-19 epidemic and complex domestic and international circumstances.”

Xi urged the PLA to focus on combat readiness and while remembering the ‘instabilities’ and ‘uncertainties’ in China’s current security scenario; the PLA “must always be ready to respond to all kinds of complex and difficult situations, resolutely safeguard national sovereignty, security.”

To be ready for a war with India may not pass well for the Tibetan recruits, most of whom have relatives living in exile in India.

Undoubtedly, the recruiters must be asking themselves some serious questions: can the Tibetans be loyal to the Communist Party and faithfully serve Chairman Xi and their ‘Chinese motherland’ or will they continue to pay obeisance to their spiritual leader in exile in India?

One detail is telling: the PLA delegation in the NPC (which also includes the People’s Armed Police) has 294 representatives. Most of the top generals are NPC members, including the infamous Gen Zhao Zongqi, who triggered the Doklam incident in 2017 and more recently the Ladakh confrontation.

These are puppets to show the world that Tibet is represented, though today China needs Tibetan puppets for its propaganda, however, it fools less and less people around the world, even if China continues to call itself a good neighbour and a peace-loving country.

On March 1, China Military Online, quoting a statement from Ministry of National Defense stated: “China’s strategic choice to take the road of peaceful development and independent foreign policy of peace, as well as the traditional Chinese culture advocating ‘harmony’, …China unswervingly pursues a defense policy that is defensive in nature.”

The same article stressed that “China must not lose an inch of the territory that the country’s ancestors have left behind. The building and development of China’s national defense and armed forces is entirely driven by the need to safeguard China’s national sovereignty, security and development interests, not targeting any country or not posing threat to any country.”

One could ask: have these ‘ancestors’ ever set foot in Ladakh, in Arunachal Pradesh or elsewhere on India’s northern border? The answer is no.

During a recent CPPCC session, the PLA deputies discussed a number of issues related to national defense; one of these was how to “incite rural revitalization in ethnic areas through military-civilian cooperation.”

The present recruitment is in line with this policy.

However, the truth is that the PLA leadership today fears the Tibetans.

Recently, a notice from the Metok Border Management Brigade announced that from March 1, the Chinese authorities began “to check border pass, ID cards and other documents of people entering and exiting Metok.”

Metok is the last small, but strategic town located near the Great Bend of the Yarlung Tsangpo, north of the McMahon Line (where mega hydropower plants are being planned).

Even the PLA is not exempted from these new restrictions: “officers and soldiers of the PLA and the People’s Armed Police who are not stationed in the area must present a certificate issued by the competent department to enter and leave the border area.”

China clearly has a dilemma; how to show that the Tibetans are on its side, when they are probably not.

This is happening when Beijing is preparing to celebrate the 70th anniversary of the 17-Agreement Agreement on the Peaceful Liberation of Tibet; an accord signed under duress according to the Dalai Lama (at gun point in fact). A great dilemma indeed for Beijing.