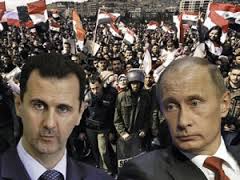 Commenting on the recent military Russian intervention in Syria, Jeremy Shapiro, a senior fellow in the Brookings Institution, said “the Russian intervention is so incredibly stupid that it took the US by surprise that (Russian President Vladimir) Putin would actually do it.”  As to why the US would be happy to let Putin have his way in Syria, he quoted Napoleon, to say “When your enemy is making a mistake, do not interrupt him.”

If one were to look at US President Barack Obama’s Middle East strategy (despite many analysts contending there is none) it has been to put the Middle East into a ‘free fall’, letting the ‘geopolitical forces in the region find their equilibrium’.

This strategy has seen a series of moves (and half-moves) being initiated; the latest one being letting Turkey have its way with the Kurds and in the process have it move away from Russia and behaving more as a member of the NATO (North Atlantic Treaty Organisation), that it is; all supposedly to get Turkey to join the fight against the Islamic State. Turkey is now threatening to scuttle some key energy deals with Russia which had been secured with a promise of billions of dollars in Russian financing for a nuclear plant in Turkey.

The next question would be: did Russia pull off a surprise in Syria? Well the Saudis did definitely have a premonition, otherwise they would not have rushed to Moscow to strike a deal and try and head-off Putin. Even Israeli Prime Minister Benjamin Netanyahu was in Moscow in September.

Therefore, is there merit in the argument that Russian presence in Syria not only serves Obama’s Middle East strategy but also give him an opportunity to ramp up pressure in Ukraine and regain his fast disintegrating leverage with the European Union? This article examines some aspects of this argument.

According to Dmitry Adamsky, commenting in the Foreign Affairs magazine, Moscow’s goals in the Middle East are: “To build a buffer against radical jihadists on its southern flank, to export arms and nuclear energy, to project power in the Middle East’s warm waters and beyond, to compete with the West, and, recently, to expand influence among and through regional Christian communities.”

Operationally, the Russian move in Syria is seen as an attempt to change the situation on the ground in order to coerce the US and its regional allies into accepting Syrian President Bashar al-Assad as part of any political solution. While Russia would like to use the resulting favourable ground situation to negotiate from a position of strength, the US on the other hand believes Russia is going to have difficulty in supporting its forces, both operationally and economically, and therefore may not be able to alter the situation in Syria to its advantage.

Russia is considering the deployment of irregular troops, or “volunteers”, to carry out ground operations. Reportedly Russia is looking for volunteers on social media to join the country’s fight in Syria. Putin has allocated $60 billion from a secret fund to accelerate the military build-up despite the country’s struggling economy.

The fund is an unallocated part of the Russian federal budget. Russia has already lost some $40 billion due to sanctions imposed by the West on Russia since March 2014 over Ukraine. Since then, its currency, the rouble, has slumped, oil prices have tumbled, and billions of dollars worth of assets have left the country.

Russia appears convinced that any success in Syria would weaken the sanctions regime; but the US would believe that the economic fallout of Putin’s Syrian foray would prove to be the tipping point for the tottering Russian economy.

Putin since then has gathered his own anti-Islamic State/pro-Assad coalition of the willing, with the Kurds too throwing in their weight behind him.

In a recent press conference Obama said he believed Russia was making a strategic mistake by deepening its support for Assad, but emphasized that he would not increase US military intervention in Syria.

He has ruled out engaging in a proxy war with Putin’s military, possibly scale back US engagement to focus on lessening the violence in Syria and, for now, to give up on removing Assad.

However, Washington would not let Putin have a free run, even if he sought to install a regime in Syria without Assad  but controlled in part or in full by Russia and Iran.

The US is making plans to create no-fly zones along Syria’s border with Turkey and possibly Jordan to restrict the airspace available to the Russians. It has also airdropped ammunition to Syrian rebels fighting the IS.

Russia also feels that it is a good operational move to battle the hundreds of jihadists from the Russian Caucasus and the Central Asian Republics in Syria rather than closer to home; while US is of the view that IS will be another factor that will contribute to Russia’s undoing.

It is felt that, as was the case with Iran’s intervention in Syria, Putin will succeed in stoking hatred towards Russia, escalating the jihadist threat against Moscow to disturbing levels. In all probability, the festering discontent within Russia’s own borders too will be exacerbated.

Ahrar al Sham, an Al Qaeda-linked jihadist group that fights side-by-side with Al Nusra Front throughout Syria, claims to have launched rockets at the Hmeimim (or Hamim) airbase in the Latakia province where Russian forces are stationed.

This isn’t the first time Ahrar al Sham has claimed attacks on the Russians’ airbase in Syria. Other jihadists have launched rockets at Hmeimim as well. On September 29, the predominantly Uzbek group Katibat al Tawhid wal Jihad (KTJ) claimed responsibility for “rocket attacks” against the “Russian infidels” stationed at the base.

With the Taliban threatening to overrun large parts of Afghanistan, First Vice President Abdul Rashid Dostum is seeking help from Russia, including pressure the republics of Central Asia, three of which border Afghanistan. Dostum requested for heavy weapons and helicopter gunships.

Russia has also announced that it will deploy attack and military transport helicopters to beef up its military presence in Tajikistan after Tajik President Emomali Rahmon expressed concern about the “increasingly deteriorating situation” in northern Afghanistan. Point here is that Russian security one way or the other is linked to developments in Afghanistan.

The problems that Russia’s expanding presence in Syria will bring for Putin’s regime are reminiscent of those that brought about the Soviet rout in Afghanistan.  Russia will be utilizing its resources on two fronts, Ukraine and Syria, putting a severe strain on the country’s economic and financial resources.

Putin’s Syria gambit is also open to blow-back from the anti-Assad governments of the Middle East, which will respond to offset Russia’s increased military assistance to Assad. Some of them in all likelihood will step up their support to their proxies operating in Syria, delay the securing of key territories and thereby consume vital Russian firepower.

However, the real crunch will probably come from Afghanistan where the Afghan government, security forces, and citizens seem to lack the resolve to halt Taliban’s momentum. In Syria, Russia, maybe not Iran, had a choice, but the same may not be the case in Afghanistan. It’s in Afghanistan that the US can really arm twist Russia despite the strong possibility of China stepping in.

Even with the threat of foreign fighters, refugees streaming into Europe, and the strategic consequences of loss of long-term control of the Middle East, the US seems clear that it would give enough room to Russia and Iran to dig themselves into a hole.

Some would still argue that the Obama administration’s reluctance to be more assertive in Syria is a strategic necessity born out of war weariness and a lack of attractive options, while Russia’s actions are not simply about Assad and ISIS; they are, more importantly, about reshaping the geopolitical landscape in the Middle East. But as David Lesch, US professor of history, put it (and some strategist in US possibly believe), “fifty years from now, historians may identify Russia’s 2015 push in Syria as the beginning of the end of Putinism, just as the 1957 landing was the beginning of the end of Nasserism.”