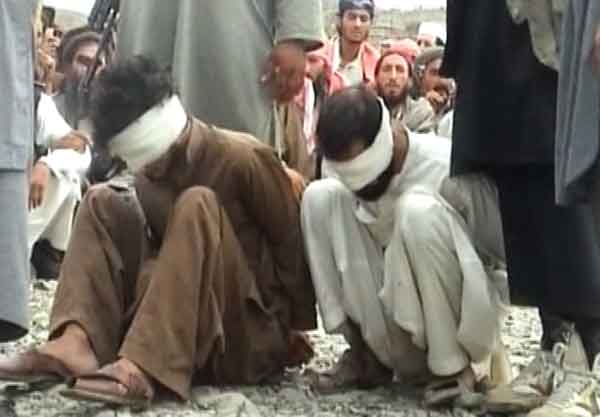 With an exit forced on Taliban in 2001, the world had come to believe that it was finally time when the winds of change would propel Afghanistan on the path of present to a brighter future. But, hardly has the world been wrong in its prophecies as much as it was in this case.

On the one hand where the newly inaugurated Cabinet of Ministers in Canada represent gender balance and diversity at its best, in another part of the globe far from it, a woman was put in a hole and stoned to death. This is the 2015 of Justin Trudeau who says that women need to be in power precisely because it is 2015; this is also the 2015 of those who would deny women the right to life because hey, it is still 2015!

Stoned to death, the bludgeoning of a 19 year-old girl in southern Afghanistan is, unfortunately, not a scant occurrence. While it did certainly shock many, the practice of violence against women continues in one form or the other, with some being as cruel as being stoned to death, and that too on a charge of something as innocuous as being in love. Incidentally, a film was made on ‘love crimes in Afghanistan’ not so long ago; a documentary that lists being in love as amounting to committing a crime to many in that country. The situation in India is no different where in the name of honor, women and men are hacked to death or are killed in the most gruesome ways, and often without shame or even a trace of remorse.

While violence against women is rampant throughout the world, this specific case that came to light from Afghanistan reflects something that is more systemic: the presence of Taliban. Happening some 45 kilometers from the provincial capital of Ghor, it is purported that those who had run this kangaroo court and executed the punishment are the members of Taliban, or at least have their backing.

Situated next to the province of Kandahar—which is known to have been the seat of Taliban back in the years when it was ruling in full force—this tragic incident has not been a lone reminder of the barbarism that continues to run amok in the hinterlands of the country. In fact, it would be a misnomer to identify the stretches of such places as hinterlands alone as the lynching of Farkhunda Malikzada in the heart of Kabul would certainly belie it. But apart from the sheer barbarity that was put to display, what this incident tells us is that the grip of Taliban on Afghanistan has not loosened much even after the fourteen long years of war that was waged against it.

Displaying its strength, Taliban has been at the forefront of unleashing deadly assaults on the civilians of Afghanistan and the foreign forces alike. In fact, ever since the drawdown of 2014, Taliban has come to hit-back with greater force and to an extent that it could manage to take hold of the provincial capitals in those regions that were not considered to be its traditional space. They not only overran the government forces, but they could maintain their hold on the captured capitals for days before they decidedly departed from the scene.

What is more troubling than this however, is the existence of their parallel governments in many places in Afghanistan. Addressed as ‘shadow governments’ by those in power, ostensibly to diminish (albeit in one’s own mind) about the power Taliban enjoys, these governments of this political-movement-cum-organization is complete with all branches of governance—from administrators to judges to executioners.

Notwithstanding what they are addressed by those who hold the ‘formal’ reins of power, in practice, the spread of Taliban’s control is both expansive and effectively felt in great portions of Afghanistan. While they have been pushed out of the major cities of the country, their presence is not difficult to detect. From the deadly blasts they execute to the threats they issue, Taliban continues to lurk as frightening shadows in the urban parts of Afghanistan, with the situation in the rural areas being even worse. Their physical presence in thronging numbers adds materiality to the verbiage of threats that continue to affect the peace and prosperity of Afghanistan.

Their persistent presence in Afghanistan indicates the sheer resilience of this organization that is able to guarantee it of a continued existence. Although slightly uprooted from their home domain in the South of Afghanistan, their presence in this part of the country is far from being over. Moreover, if the capture of provincial capitals in the North of Afghanistan is anything to go by, the expanse of Taliban can be said to be widening even as people wish ‘death to Taliban’.

Certainly the fear of gun can extract unwilling obedience from those who are shown the weapon, but it is crucial to understand that Taliban is more than just a weapons brandishing group; it is a political movement and organization in its own right. Like any other political entity, Taliban functions on an agenda that has both ‘negative’ and ‘positive’ facets to it. To add to this, they have the organizational capacity to execute their constitutional and ideological commitments, giving them a governmental-esque make-up.

Akin to any institution, be it political or otherwise, Taliban’s programs run on measures that are both punitive and incentivizing. They are punitive to the effect that any violation of the norms set by them is punishable, and rather in the goriest of ways; as for their incentivizing measures, much of it depends on exploiting the existing grievances at almost any and every level.

Panning out to cover almost all the aspects of life—be it social, political or even economic—Taliban’s operations works on the principle of disenchantment and subsequent co-optation. For instance, taking advantage of the lack of ‘governmental’ reach, Taliban not only promises justices but delivers it too, and often at a quicker pace. In fact, it would not be a mistake to think that is for their very efficacy in delivering justice that Taliban is often able to edge-out the formal, legal course that is found to be tardy, distant and long-drawn.

In distancing the people from the formal processes of governance by offering quicker (although highly brutal) remedies, Taliban simultaneously co-opts those in whose favor it delivers the verdict. Here it becomes critical to note that like any other ‘rational’ political agent’, Taliban too does its cost and benefits analysis, with the result being that it often exploits the politically, socially and economically vulnerable in favor of those who are strong.

However, instead of inhibiting the base over which it thrives, these calculations are often countered by a rather flexible approach to co-optation. As cited in the Inter Agency Journal (IAJ), Taliban has in place an effective reconciliation program that allows its cadres to swell by taking-in even those who were their adversaries in the past.

A highly-flexible but a consolidated entity, Taliban—much to the dismay of those in control of the formal, legitimate apparatuses of power—effectively demonstrates the execution of the ‘carrot and stick’ policy. In being located at the very site where it operates, unlike the formal institutions of administration and governance, Taliban ensures that it provides an alternative that is tailored to the requirements of the place. In other words, while a common ideological theme informs the whole movement, the operations of Taliban adapt to the circumstances they encounter such that they are spatially and temporally malleable.

Also, while these decisions are more often than not taken in favor of those already privileged, this template does not prevent Taliban from reversing the trend and placating those who it had hitherto opposed. For instance, if reports are to be believed, the capture of the cities in the North of Afghanistan are purported to have been made possible for Taliban because of its recruitment drive among those communities that it was traditionally not related to. If indeed true, these reports are effective reminders of the sheer rationality of a movement that is often dismissed as ideologically over-charged.

Even after fourteen years of war waged against it—the embers of which continue to burn till date—Taliban appears to be far-reaching not only in the form of the physical space it covers, but also in terms of the kind of consequences it is still capable of creating through its activities. Despite its internal conflicts, Taliban continues to make its presence felt in Afghanistan, and which certainly does not bode well for the fragile security situation of the country as well as for the whole of South Asian region.