Siachen: An episode to Remember 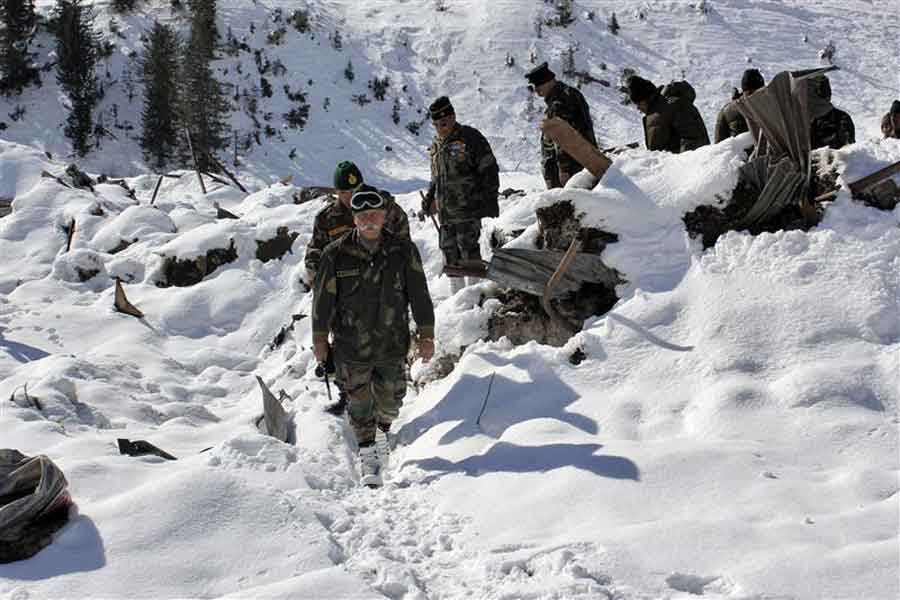 In the troubled relationship of India with Pakistan, there have been very few occasions when the latter desired a genuine end to some of the problems. Siachen belongs to this rarest of the rare category. The event belongs to the period of Gen Zia-ul-Haq, who had seized power in Pakistan in 1977 and made himself the President and the Chief of Army Staff. The combination of the two offices had made him unquestionably the most powerful individual in Pakistan.

Zia-ul-Haq is remembered in history as a political murderer and the initiator of the Islamic thrust in Pakistan’s politics. Few will credit him with having a core interest in the well being of the people of Pakistan. However, the reality, strange as it may appear, was quite to the contrary.

In his time the Pakistani Defence Services were consuming almost 48% of Pakistan’s annual budget. The funds available for being spent on development, education and health were, therefore, very small. Zia-ul-Haq got convinced that the situation would not change for better for the people of Pakistan unless the outlay on defence was significantly reduced.

The period was also the era of manifestation of Sikh impatience in Punjab with the Govt of India. Sikh dissatisfaction was also stoked by Pakistan. Some unsavoury incidents had taken place in the Indian Army regiments in which Sikh soldiers had featured.

Siachen was identified as one of the major cause of wasteful expenditure. For success Indian cooperation was crucial. Zia-ul-Haq was able to enlist the support of his Corps Commanders for making an approach to India.

Such a path breaking effort could not be made through normal diplomatic channels. Further, a very high level intermediary was necessary to prove to the Indian Govt that the exercise was not frivolous. Zia-ul-Haq zeroed on a governmental leader of a very high status of a Muslim country, well disposed towards India, to convey his message to India. He received an immediate favourable response.

During discussions that followed between high-level interlocutors from both sides at neutral locations, the Pakistan side explained the background to their move and suggested that a solution on Siachen should be given the topmost priority.

Pakistan recognised the Line of Actual Control (LAC) in J&K up to point No. 9842. The agreement signed between the two countries drawing the LAC had stated that the line of demarcation between the two countries from this point would run roughly Northwards but no delineation of this on maps had taken place. Pakistan had subsequently claimed all the territory in J&K from NJ 9842 to Karakoram Pass as within its territorial jurisdiction. This was a unilateral claim, unrecognised by India. 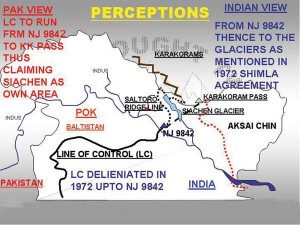 The claim was also belied by the facts on the ground. All the territory in control of Pakistan was on the Western side of Saltoro Range of Siachen Glacier whereas the areas claimed were substantially on the Eastern side of the glacier. On the other hand the Indian Army was in occupation of a good chunk of territory on the Western side of the glacier. At the end of a series of meetings between the two sides, Pakistan agreed to a line going Northwards from NJ 9842 roughly along the heights of Saltoro to the Chinese border as the continuation of the LAC, giving up all claims to any territory to the East of it. The agreement made the Saltoro range the effective border between J&K and Pakistan occupied territories of the State. This meant the giving up by Pakistan of claims to territory within the tangential line from NJ 9842 to Karakoram Pass. The Indian side would also be giving up points occupied to the West of the glacier but that involved no tactical or strategic loss since the commanding heights would continue to remain with India.

The Pakistani side also conveyed the sense that in due course the LAC could become a permanent border. They were also ready for troop reductions, up to two divisions worth, provided there was a matching response from India. Freeing of trade was the only major issue on which Pakistan showed itself unwilling to make any compromise.

Actual demilitarisation of Siachen was to follow the formal acceptance of the extended LAC by the governments of the two countries through discussions between their military authorities.

Since the tentative agreement between the two interlocutors involved a substantive compromise on the Pakistani position, the Pakistani side was asked to confirm their understanding of the extended LAC on a map. In due course a Survey of Pakistan GHQ Rawalpindi map, with the proposed extended LAC marked on it, was received by India.

In an interview to Barbara Crossette on May 21, 1991, hours before he was assassinated, Rajiv Gandhi was the first one to disclose the tragedy of the shattered dreams. The following extract from her report, published by New York Times on May 22, 1991 says it all.

The GHQ map was seen as proof of Pakistan’s bonafide intentions as of that moment. Exercises then commenced to bring the historical understanding to the public domain. The Pakistani side was eager to demonstrate that it was turning a new leaf in Indo-Pakistan relations. One spectacular episode, totally uncharacteristic, says it all.

The period was also the era of manifestation of Sikh impatience in Punjab with the Govt of India. Sikh dissatisfaction was also stoked by Pakistan. Some unsavoury incidents had taken place in the Indian Army regiments in which Sikh soldiers had featured. In one such incident four Sikh soldiers posted on the Pakistani border had deserted and crossed over to Pakistan. A few days later, a message was received from the Pakistani interlocutors that as a mark of goodwill, the soldiers would be returned to India. They were to be released on a certain date at a certain time inside a demarcated area, the coordinates of which were given, from where they could be picked up. These details were immediately passed on to the BSF who nabbed them from the designated area. The soldiers were handed over to the Indian Army and were court-martialed later.

This grand new era in Indo-Pakistan relationship, however, was not destined to last for long. The Generals who had given the green signal to Zia-ul-Haq, to go ahead with India, started feeling increasingly disturbed at the way things were turning out to be. They started seeing the peace process with India as a catastrophe to their interests. They were determined to stop it at any cost.

In Aug 1988, Gen Zia-ul-Haq was killed in a plane crash. The cause of the crash has never been disclosed but one can speculate whether his elimination was contrived after disenchantment with the possible end results of the peace process that started growing among the Army Generals. Benazir Bhutto who was returned as Prime Minister in the elections that followed Zia’s death, was prevented from advancing the agenda further. Since then, many rounds of discussions have taken place over Siachen, but not an inch of new ground has been covered. Pakistan also has reverted back to its earlier position viz the territory to the West of the tangential line from NJ 9842 to Karakoram must belong to it. 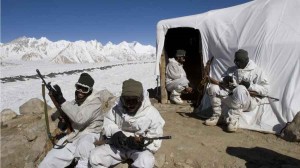 In an interview to Barbara Crossette on May 21, 1991, hours before he was assassinated, Rajiv Gandhi was the first one to disclose the tragedy of the shattered dreams. The following extract from her report, published by New York Times on May 22, 1991 says it all.

“But I know who would have solved these problems with us, he said: ‘General Zia. We were close to finishing agreement on Kashmir; we had the maps and everything ready to sign. And then he was killed.’ As Prime Minister from 1984 to 1989, Mr Gandhi had a good working relationship with President Mohammed Zia-ul-Haq, who died in an unexplained plane crash in Aug 1988. Mr Gandhi said there was evidence that General Zia had been murdered, but he would not say more.”

Much water has flown down the rivers of Pakistan since this ray of hope was squelched. Islamisation, introduced by Zia as a weapon of policy, has grown by leaps and bounds in Pakistan. The magnitude of its appeal was manifested in the last general elections. Nearly Muttahida-Majlise-Amal (MMA), a conglomerate of Islamist groupings, captured 20% of the seats in the National Assembly. MMA also controls the Provincial Governments of North West Frontier Province and Baluchistan. The psyche and beliefs of this grouping are shared by many in the Pakistani Establishment, Armed Forces and ISI, with the result that the Islamic might in Pakistan overshadows even the military might. It is this influence, which seated the Talibans in Afghanistan and is now trying for their revival there. In their strategic perception India will always remain a foe, meriting no compromise whatsoever on any issue.

Such a hard-line approach also sanctifies continuing Jehad. International pressures on the Pakistani Govt have failed so far to deflect the Islamists from what they identify as articles of faith. Their roadmap is for an increased confrontation in the subcontinent.

It is, therefore, difficult to decipher how on any significant problem between India and Pakistan, Siachen included, there can be a movement forward in the future. Optimists are perhaps destined to keep waiting in vain.

There are examples galore for the discerning to ascertain which way the wind is blowing. In the North Waziristan tribal area of Pakistan, the establishment of an Islamic State was announced earlier this year for conducting Jehad against the West in Afghanistan. Islamists wish to incorporate all the Muslim regions in South East, presently belonging to Myanmar, Malaysia, Thailand, Singapore, Indonesia, and Philippines etc., into a new State to be called Navsitara Raya. A leading Chechen rebel, Movladi Udugov, chief ideologue of the Chechen movement, recently hinted that it was not enough for the Muslim separatists in the Russian Caucasian region to strive for an Islamic State: their aim should be to set up a worldwide Caliphate.

Such developments should be taken into account while policy is made in India in relation to Pakistan. In the ultimate analysis it has to be conceded that the Muslims have complexes against non Islamic entities, which are on the rise, and the weapon of Jehad has been used against India several times down the centuries up to the modern times. 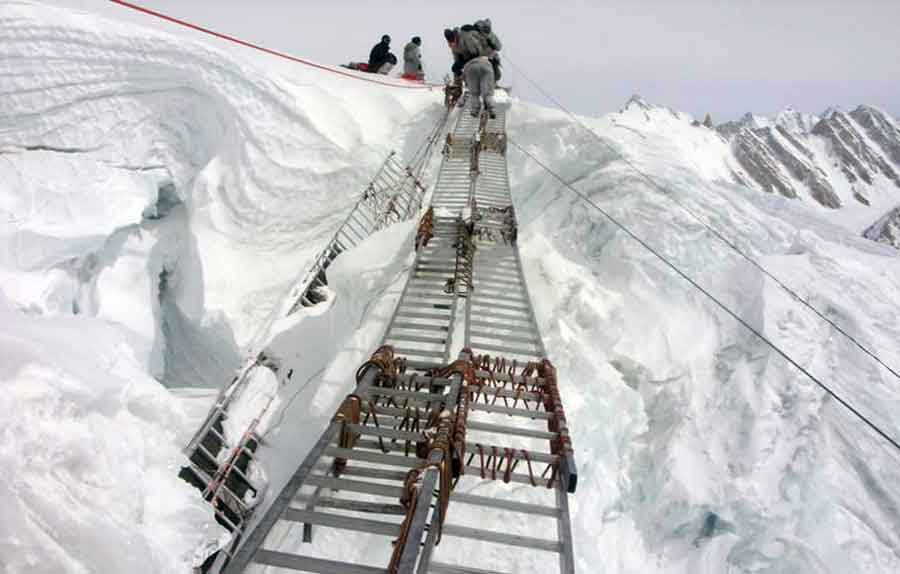 We blaze our own tracks

One thought on “Siachen: An episode to Remember”