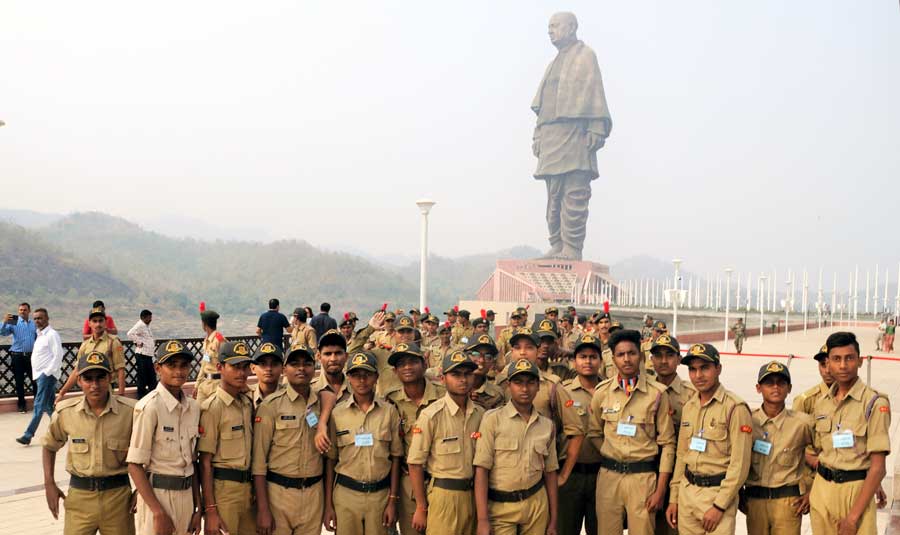 The recently inaugurated statue of Sardar Valabh Bhai Patel in November 2018 has inspired a many. As India’s iron man stand tall amongst the masses, he still rules the hearts and minds of young Indians. The National Cadet Corps being the largest youth organization in this country always draws inspiration from such leaders.

A total of 1000 Cadets participated in this camp in four batches. It was a huge gathering of young minds from all across the country representing vivid cultures and religions under the shadows of one of the India’s greatest leaders. A camp not only for trekking alone but also of national integration.

This trek was flagged off by Maj Gen Roy Joseph, Additional Director General, Gujarat Directorate. The aim of the trek was to buildespirit-de-corps and camaraderie amongst these cadets hailing from different regions and also introduce them to jungle hiking and outdoor life.

Each cadet trekked for 50 Kms in scenic Narmada District of Gujarat over four days. They not only trekked but also got hands on lessons on camping outdoors. At the end they all visited World famous Sardar Patel Statue of Unity.

During this period of camping these young minds were also given a guided tour to Narmada Damand were introduced to system of power generation, showcasing India’s development.

Brig Charandeep Singh, SenaMedal, Group Commander Baroda was the Trek Commander. He himself is a passionate biker and has immense love for outdoors and nature. His interaction with cadets came about naturally as the gathering was all about nature and adventure.

As per those involved in this process revealed that the cadets were extremely thrilled by this unique once in a lifetime experience.And they have carried with them fond memories and new friends pan India.

A true objective of national integration and unity in diversity well served.