Polity at War with National Security 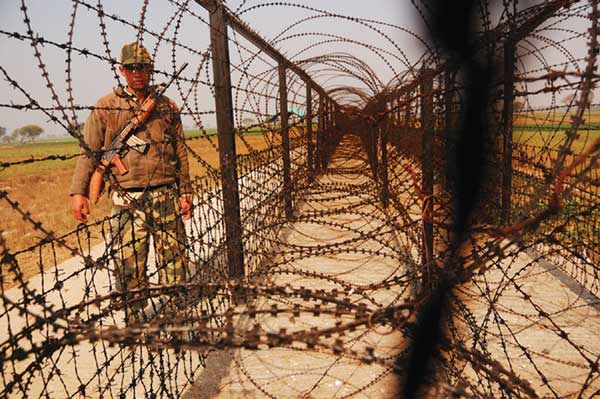 The Bengal police recently arrested two BSF personnel for alleged rape of a 23 year old woman. She was apprehended while attempting to cross the border from India to Bangladesh. Strangely, the accused duo comprised a Sub Inspector and a jawan. This kind of partnership between a senior and junior in such a heinous crime is abnormal and incredulous for uniformed services. Such partnership in crime can barely be concealed from the comrades and the hierarchy in any organisation deployed on the border for security.

The alleged crime against the woman has obfuscated the fact that she, along with her child was trying to cross the border illegally and surreptitiously with the help of a partner in crime, a tout. Is it the norm on Indo-Bangladesh border? Has the border become incidental? Does the border fencing have no deterrence? As per some reports the woman is believed to have confessed that she was on her way to meet her husband in Bangladesh. Is this kind of bonhomie across the border not a very unusual phenomenon? That is what the easy availability of touts suggests.

Is this a conspiracy by inimical forces, especially jihadi forces, internal and external, to destroy the present border regime on Indo-Bangladesh border, so that the process of demographic change is not deterred and its pace is accelerated?

This incident must be viewed in the political backdrop of Bengal, the security concerns of India vis-à-vis Bangladesh and the jihadi architecture in the sub continent. In Nov 2021, the Bengal Assembly passed a resolution, which opposed the decision by the Central Govt, to increase the jurisdiction of the BSF from 15 km to 50 km on the border. The resolution demanded that the notification be immediately withdrawn.

The alleged incident has vitiated the security and political environment in the country. How viciously politics can hurt security of the country is held out by some reactions. One member of the ruling dispensation, on the issue of BSF jurisdiction said that the Border Security Force has now become Bharatiya Janta Party Security Force. Another member in his tweet had litany of adjectives reserved for the Home Minister and the Prime Minister. To strengthen his charges in the instant case, he invoked several unrelated incidents, which is the tactic of small and petty politicians. This kind of posturing has a four fold aim — to demoralize the security apparatus; to please the leader; to impress and assure the external benefactor; and finally to encourage the proxies within the country.

Speaking at the Passing Out Parade of National Police Academy, in Nov 2012, the NSA, Ajit Doval said: “The new frontier of war, what we call the fourth generation of warfare is the Civil Society. War itself has ceased to become an effective instrument for achieving your political objectives. They are too expensive and unaffordable… it is the Civil Society that can be subverted, that can be divided, that can be manipulated to hurt the interest of a nation.”

Why this animosity between Central Forces and the State Police? Why does political opposition transcend into clash between Internal Security imperatives of India and Law and Order perspective of the state government? Why state governments in political opposition to the Centre refuse to see the complementary and unity of purpose between the Central Forces and the Law and Order apparatus of the States? Probably these states have become targets of the fourth generation warfare that  the NSA spoke about. It is for smooth and harmonious functioning that it was decided that as in the case of senior police officials of all states, the senior positions in the BSF are also officered by IPS officers.

The penetration of inimical forces in the Civil Society and polity of Bengal is quite obvious from some of the fulminations against the BSF by the legislators in the Assembly. It appeared that they were hitting out at the border forces of some hostile country. One of the MLA said: “We have seen the kind of atrocities that BSF perpetrates on people. A child who has witnessed his mother being tortured inappropriately under the garb of frisking…” This statement was made last year during the discussion on the increased jurisdiction of the BSF in West Bengal. Nevertheless this bears uncanny resemblance with the narrative being created in the instant case. Is it coincidence or conspiracy?

The BSF issued an official statement saying that such statements are very demoralizing, and was at pains to underscore that 2397 Mahila Praharis are deployed on the Bengal segment of the border for frisking women at gates. Meanwhile another set of legislators from the opposition marched to the Headquarters of the BSF, and apologized for the insults heaped on the Force by their fellow legislators. This is politicisation of security forces at its worst. Politics could not get more anti-national.

Bengal has always been polarised between nationals and anti nationals. The most patriotic nationalists have been from Bengal, but the staunchest votaries of Pakistan has also been from Bengal.

The incendiary feeling of separatism was set on fire by Jinnah which resulted in the massacre following the declaration of Direct Action Day on 16 August 1946. Most of the perpetrators did not go to East Pakistan. The enthusiasm of today’s Pakistan, erstwhile West Pakistan was much muted compared to Muslims in Bengal. The Bengal polity was again torn between loyalty to China and India during the 1962 India-China war. A big segment of the communists brazenly supported China. A chief minister from the same segment when questioned about the unbridled illegal migration from Bangladesh had said that he did not differentiate between the proletariat of India and Bangladesh.

It is sad that such anti national forces rose to rule different areas, especially border states, within a decade or two after the transfer of power on 15th August 1947. Had it not been for the Government of India Act 1935, which constitutes the bulk of the Constitution, these anti national powers would never have enjoyed constitutional validity and political respectability. Had it not been for the Cold War these anti national outfits would have never survived? It would not be wrong to say that the Government of India Act has been detrimental in the nation building process of India. It is the sheer strength of Indian Civilization, that despite such robust Constitutional obstacles, India has forged ahead, and emerged as very consequential global power.

The worst thing that happened in India that the governance pattern did not change from the colonial era, even as the threat perception changed with creation of Pakistan and loss of buffer status of Tibet. Some 11000 kms of border was created after transfer of power which engendered a new geopolitical dynamics. In the border states therefore, internal security deserved an overriding role over law and order. In view of these exigencies, internal security of the country cannot be hostage to federalism.

In consonance with the changing threat perception, the jurisdiction limits of the BSF has waxed and waned. In Gujarat it has been reduced from 50 kms to 15 kms, in Rajasthan from 80 to 50 kms and in Punjab from 15 to 50 kms. In the case of smaller States and Union Territories, like Manipur, Nagaland Mizoram, Meghalaya, Tripura, J&K and Ladakh… their respective territories in entirety have come under the jurisdiction of Assam Rifles/BSF to combat terrorism and illegal migration. One of the reasons for increase in jurisdiction in Punjab is growing usage of drones for supply of weapons and drugs by Pakistan in support of terror. This new threat manifested in a drone attack on Jammu airbase. Though it did not cause much damage, it certainly imposed caution.

Moreover, with considerable reduction in infiltration across the LoC due to the counter infiltration process and highly evolved deterrence infrastructure of the Indian Army, there has been corresponding increase in Punjab and the Jammu sector. Drones have made reconnaissance of the IB relatively easier for insertion of jihadis into India by the Military-Intelligence establishment of Pakistan.

Why is Bengal Govt on Edge?

Why such violent reactions by the government of Bengal to the increase in BSF jurisdiction, which in fact shares the security burden of the state and permits to focus on economy and governance? Probably because of the ‘ fiefdom’ syndrome! Probably because of illegal vested interests! Probably in deference to external powers that helped to create the regime!

Most probably because of all the three reasons!

The new BSF jurisdiction covers nearly 30 percent of Bangladesh which has substantial jihad inspired vote bank which resents secularism and the border regime as obstruction in the way to mini caliphate of Bengal and Bangladesh. Geopolitically, Bengal is most vulnerable to demographic jihad and global jihad. Out of the 4096 km border, the longest in the world, 2216.70 km lies in Bengal. Ten out of 24 districts of Bengal share boundary with Bangladesh. These are: Cooch Behar, Darjeeling, Uttar Dinajpur, Dakshin Dinajpur, Malda, Murshidabad, Nadia, 24 Parganas, South 24 Parganas and Silliguri (Chicken’s Neck). Apart from the Silliguri Corridor, the strategic significance of Bengal lies in the fact that it shares boundary with four countries I. e. Nepal, Bhutan, Tibet and Bangladesh.

The Indo- Bangladesh border is buffeted by three cross border phenomenon i.e. illegal migration from Bangladesh, cattle smuggling from India and export of global jihad from Bangladesh. Even though Sheikh Hasina has cracked down heavily on the jihadis, who in effect have found safe havens in India, and now lend their violent weight in the Indian elections. Cattle smuggling is massive economic activity which fills political coffers. In August 2020 the CBI arrested a BSF Commandant on charges of cattle smuggling. There was complete silence on this action on part of ruling dispensation in Bengal. It is the same CBI that the Bengal government has withdrawn permission for operating in the State. Now when the kingpin of cattle smuggling empire, Anibrata Mondal, a key member of the ruling party been arrested the Bengal dispensation is acting desperate.

In the debate on BSF jurisdiction in the assembly the most abusive response was from another key minister, Partha Chatterji who was found in possession of an large amount of cash and wealth during an ED raid, and is now in prison.

The security of the country cannot be dictated by crooks and smugglers in the name of federalism or in the garb of being the peoples elected representatives..